For other video protocols please visit our protocol library here.

Table 1. The volume of DPBS and trypsin-EDTA required for trypsinization of adherent cells.

To calculate the number of viable cells/mL:

The final value is the number of viable cells/mL in the original cell suspension.

If both live and dead cell counts have been recorded for each set of 16 corner squares, an estimate viability can be calculated. 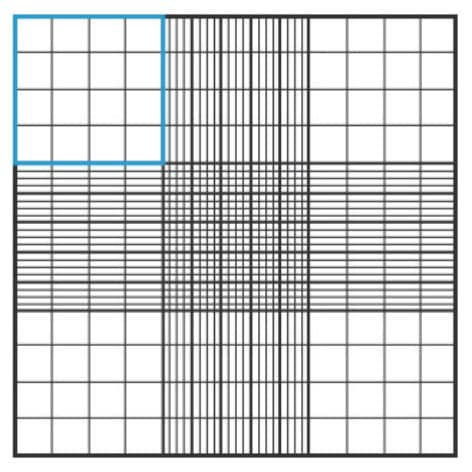 Figure 1. Hemocytometer gridlines.
​​Hemocytometer diagram indicating one of the sets of 16 squares that should be used for counting.

Counting cells allows the accurate determination of cell numbers, and therefore, consistency between experiments. This video will outline the procedure for counting both suspension and adherence cells using a hemocytometer.

Before commencing work, thoroughly spray the inside of the laminar flow safety cabinet with disinfectant and wipe clean with tissue. Dispose of used tissue in the appropriate waste bin. Next, spray the inside of the hood with 70% ethanol and wipe clean with tissue. The hood is now clean and ready to use. Remove cell culture media and trypsin from the fridge, and place in a humidified, 37-degree C, carbon dioxide incubator to warm. Meanwhile, look at the cells to be counted using a microscope to check for any visual signs of bacterial and fungal contamination. Spray media bottles and pipettes with 70% ethanol before placing in the laminar flow safety cabinet.

For suspension cells, gently agitate the flask to ensure the cells are well mixed. Before they get a chance to settle, take an 0.5-milliliter sample of cell suspension and pipet into a sterile Eppendorf tube. For adherence cells, remove existing media, wash with room temperature PBS, and add trypsin EDTA to detach the cells. Refer to Table One for the volumes of PBS and trypsin required. Incubate the cells for two to five minutes in the humidified 37 degrees C, carbon dioxide incubator. The incubation time will need to be optimized for the cell type. When all cells are detached, neutralize the trypsin EDTA with warm serum-containing growth media appropriate to the cells and culture. Refer to Table One for the required volumes.

To begin counting, prepare the disposable hemocytometer. Using a P2000 Gilson Pipette, take 100 microliters of suspension, and add to 400 microliters of trypan blue, note, 0.08%, and mix well. Take 100 microliters of the trypan blue cell suspension mix, and carefully pipette a drop of the suspension into the well of the counting chamber, allowing capillary action to draw the sample in. Take care not to overfill the counting chamber. View the counting area under a 10 times magnification using an inverted microscope. Using the microscope, focus on one of the four by four grids on the hemocytometer and count the cells that are negative for trypan blue. These ones are viable. Also, make note of how many cells were positive for trypan blue. These cells are dead, and this number can be used later to calculate the percentage viability of the culture if required.

When counting, employ a system whereby cells are only counted when they are within a square, or on the right-hand or bottom boundary line. Record the number of cells counted in this set of 16 squares and move the hemocytometer until all four sets of 16 squares on the hemocytometer have been counted, and their values recorded. To calculate the cell concentration, take the average number of viable cells in the four sets of 16 squares and multiply by 10,000 to get the number of cells per milliliter. Then, multiply this by five to correct for the one in five dilution from the trypan blue addition. This final value is the number of viable cells per milliliter in the original cell suspension.