Metastasis involves the spread of cancer from the primary tumor to distant tissues and organs.

This process is a significant factor in the determination of cancer morbidity and a characteristic of cancer malignancy.

The prediction of the metastatic potential of a tumor is important and could allow for personalized therapy at an early stage to better treat cancers. Accurate biomarkers of metastasis thus represent an enormous advance in the potential clinical treatment of cancer. The use of these cancer biomarkers in the clinic could help to detect initial stages of metastasis, preferred sites of cancer metastasis and the probability of cancer recurrence.

The metastatic cascade can be separated into three main processes: 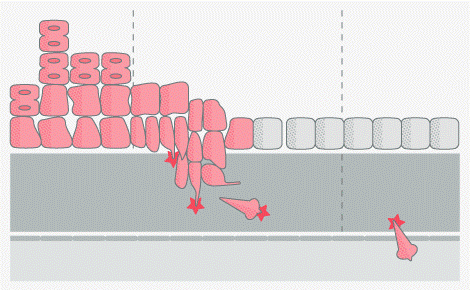 To dissociate from the primary tumor mass and invade the surrounding stroma, metastatic cancer cells must undergo the loss of cell-cell adhesion and changes in cell-matrix interactions.1 These changes include the secretion of hepranases and matrix metalloproteinases to degrade the basement membrane and ECM and expression/ suppression of proteins involved in the motility and migration.

Many metastatic biomarkers have been associated with the dysregulation of the ECM to promote metastasis. Within the clinic, the tight junction transmembrane protein Claudin-7 is utilized as a prognostic biomarker in the analysis of invasive ductal breast cancer and is being explored as a cancer biomarker to distinguish chromophobe renal cell carcinoma from other renal tumor subtypes.2

Claudin-1 expression is used as a prognostic biomarker and potential drug target for lung adenocarcinoma cases.3 E-Cadherin and Vimentin have been described as prognostic biomarkers for patients with non-small cell lung cancer treated with erlotinib.4

Epithelial to mesenchymal transition (EMT) is a staged process where epithelial cells lose cell polarity and adhesion and transition to an invasive, metastatic cell phenotype. This transition is governed by a number of growth factors and signaling pathways, including TGFβ, Wnt and Notch. These signaling pathways show cross-talk that facilitates EMT and subsequent cell invasion. A variety of additional factors have been shown to contribute to EMT, such as hypoxia, metabolic stressors, matrix stiffness and epigenetic and post-translational modulators. The precise contribution of each of these factors to EMT remains unknown and may vary according to each specific cancer.5

A number of biomarkers for the EMT process are used clinically in the diagnosis and prognosis of various cancer types. Downregulation of E‐cadherin is a key event in EMT, and the relationship between E‐cadherin loss and EMT has been established in many cancer types.6

Mucins are secreted from and localized to the apical borders of healthy epithelial cell sheets. Over-expression of MUC1, MUC4, and MUC16 are all utilized in the diagnostic and prognostic assessment of cancers, including breast, pancreatic and ovarian cancers.7

The tumor must initialize angiogenesis, without which it would fail to develop, as local diffusion for the transport of nutrients to and removal of waste products from the tumor site will only suffice for very small tumors. Blood vessels in the tumor’s vicinity provide a route for detached tumor cells to enter the circulatory system and metastasize to secondary sites. Imbalances in angiogenic and lymphaniogenic processes are thus frequently involved in cancer and lend several biomarkers that indicate cancer progression and metastasis.8

Vascular endothelial growth factor (VEGF) has been a key therapeutic target in the development of anti-angiogenic therapies to treat a range of cancers. Bevacizumab is a VEGF neutralizing antibody approved for use in a variety of cancer types, such as non-squamous non-small-cell lung cancer and colorectal cancer, with potential in the treatment of epithelial ovarian cancer.9

Lymphatic metastases are common, with a number of cancers first metastasizing to regional lymph nodes. Biomarkers for lymphaniogenesis and metastatic spread are being investigated, with VEGF-C and VEGF-D and VEGFR3 emerging as biomarkers for non-small cell lung cancer and breast cancer.10, 11

To escape circulation and establish a metastatic tumor involves the integration of multiple factors and events, such as traversing the endothelial wall and transendothelial migration and angiogenesis. Consequently, many of the biomarkers of extravasation reflect earlier metastatic processes, such as VEGF, chemokines and cytokines, and ECM components, such as heparanase and matrix metalloproteinases.6

Additionally the tumor microenvironment plays a key role in metastasis and offer a number of biomarkers for clinical utility.