IHC is an increasingly common method used in the diagnosis of breast cancer and research into breast cancer pathology. There is an increasing number of antibodies available for the detection of breast cancer-specific markers. These markers are used to determine different breast cancer types, e.g. in situ or invasive carcinoma, distinguishing normal breast cell types e.g. luminal, basal and myoepithelial, and also proliferation and disease progression (Zaha et al., 2014).

Here we look at some of the most common primary IHC markers for breast cancer along with some cell type-specific markers and recommended antibodies for each biomarker in IHC. 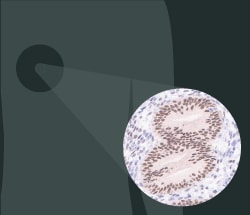 The progesterone receptor (PR) is another biomarker important for the initial diagnosis and evaluation of breast cancer (Hicks et al., 2017). PR is known to be induced by ER-α and plays a key role in ER-α protein regulation. PGR as a biomarker is therefore commonly used as an indicator of ER-α function (Mohammed et al., 2015). PR is highly expressed in luminal A-type breast cancer tissue and is associated with a good prognosis (Lim et al., 2016).

Overexpression of ErbB2/HER2 can be found in 20–30% of breast cancer tumors and is commonly found in more aggressive types of the disease (Mitri et al., 2012). ErbB2/HER2 is used as a diagnostic indicator for the FDA approved monoclonal antibody therapy, Trastuzumab (Herceptin). During this therapy ErbB2/HER2 acts as the binding target of Trastuzumab (Piccart-Gebhart et al., 2006). 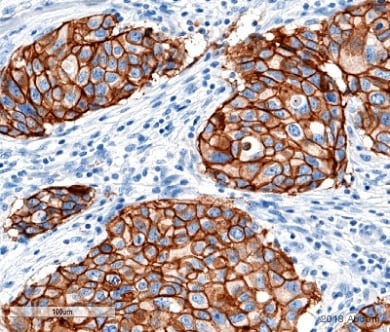 Mutated versions of the tumor suppressor p53 can be found in 80% of triple-negative breast cancer (TNBC) cases, ie tumors lacking expression of ER, PR, and ErbB2/HER2 (Duffy et al., 2018). This makes mutant p53 an excellent biomarker for TNBC, one of the more difficult breast cancers to treat as it will not respond to endocrine or anti-HER2 treatments (Li et al., 2019). Currently, there are mixed findings on the prognostic potential of p53 expression in breast cancer. Some studies have associated it with a positive prognostic outcome and others negative. (Li et al., 2019). p53 IHC stains are commonly used for diagnostic purposes.

Mutations in the BRCA genes are some of the most well-known breast cancer-associated protein mutations. BRCA1 is a tumor suppressor gene and one of the most commonly mutated genes in breast cancer. Patients with a BRCA1 mutation have a 40–80% increased risk of developing the disease making it a crucial biomarker in the diagnosis and prognosis of many breast cancer types (Fackenthal et al., 2007).

APOBEC3B is expressed in ER-positive breast cancers and is used as a biomarker of poor prognosis for the disease and is a driver for downstream genetic mutations which accelerate the progression of breast cancer. These mutations make APOBEC3B positive breast cancers extremely drug-resistant (Zou et al., 2017). IHC stain: nuclear signalRecommended IHC antibody: Anti-APOBEC3B antibody - N-terminal (ab191695)

Cyclin D1 is one of the main regulatory proteins of the cell cycle promoting the cell cycle progression from G1 to S phase. Mutations in cyclin D1 are amplified in many different types of cancer including many breast cancers. 50% of breast cancers will contain an overexpression of cyclin D1 (Mohammadizadeh et al., 2013). It has been used as a biomarker for poor prognosis for many breast cancer types, but some studies are beginning to suggest that it could also suggest a positive outcome if expressed in some luminal subtypes of breast cancer (Ortiz et al., 2017). IHC stain: nuclearRecommended IHC antibody: IHC antibody: Recombinant Anti-Cyclin D1 antibody [EPR2241] - C-terminal (ab134175)

Ki67 is an important protein involved in cell division and is commonly used as a marker of cellular proliferation. It is also used in breast cancer diagnosis to determine the level of cell proliferation which can be a prognostic marker and a good indication of well certain breast cancers will respond to endocrine therapy (Niazi et al., 2018). IHC stain: nuclearRecommended IHC antibody: Anti-Ki67 antibody (ab15580)

PPAR-γ is a well-studied nuclear hormone receptor. PPAR-γ has been implicated in different types of breast cancer in which its ligands inhibit proliferation and angiogenesis and induce apoptosis (Fenner et al., 2005). It has also been shown to play a role in promoting breast tumor growth through the maintenance of HER2 positive endothelial breast cancer stem cells making its expression a good biomarker for this cell type (Wang et al., 2013).IHC stain: nuclear​Recommended IHC antibody: Anti-PPAR gamma antibody - ChIP Grade (ab45036)

CK5 is a cytokine found to be expressed in the basal cell layer of the mammary duct. Tumors that arise from these cells are also known to be CK5 positive and so CK5 is an excellent biomarker for the diagnosis of basal type breast cancers. The CK5 positive progenitor cells may also differentiate into glandular and myoepithelial cancer types (Laakso et al., 2005).  IHC stain: cytoplasm and cell membraneRecommended IHC antibody: Recombinant Anti-Cytokeratin 5 antibody [EP1601Y] - Cytoskeleton Marker (ab52635)

SMMHC is expressed specifically in the contractile myoepithelial cells of the breast. A loss of the myoepithelial layer is commonly associated with invasive breast cancers. Markers such as SMMHC can be used in IHC to detect this layer more reliably than a hematoxylin and eosin stain alone (Zaha et al., 2014). IHC stain: cytoplasmRecommended IHC antibody: Recombinant Anti-smooth muscle Myosin heavy chain 11 antibody [EPR5336(B)] (ab133567)

Smooth muscle actin is highly expressed in normal breast myoepithelial cells. It is commonly used as a marker of this normal breast cell type. Smooth muscle actin is commonly used for histology in conjunction with SMMHC and calponins to mark out the myoepithelial layer. A combination of markers such as this is much more reliable than using hematoxylin and eosin stains alone (Zaha et al., 2014).IHC stain: cytoplasmRecommended IHC antibody: Anti-alpha smooth muscle Actin antibody (ab5694)

Calponins are proteins found within the contractile components of the myoepithelium. Similarly to SMMHC and ACTA2, calponin stains are used as a marker of the myoepithelial layer in the diagnosis of invasive breast cancers (Zaha et al., 2014).

Delta-1-Catenin is a member of the p120 family and acts as a binder of E-cadherin. Delta-1-Catenin can be used in histology to detect invasive lobular breast cancer, high tumor-node-metastasis stage, and lymph node metastasis. It is also strongly associated with HER2 positive breast cancers and can be used as an indicator of poor prognosis as it is thought to promote a malignant phenotype (Zhang et al., 2015). IHC stain: cytoplasm and cell membraneRecommended IHC antibody: Recombinant Anti-delta 1 Catenin/CAS antibody [EPR357(2)] (ab92514)

CK14 is a cytokine found to be expressed in the basal cell layer of the mammary duct. It is most commonly found to be co-expressing with CK5 is this tissue type and similarly to CK5, the histological detection of CK14 is an excellent biomarker for the diagnosis of basal type breast cancers (Laakso et al., 2005).IHC stain: cytoplasmRecommended IHC antibody: Recombinant Anti-Cytokeratin 14 antibody [EPR17350] - Cytoskeleton Marker (ab181595)