Colorectal cancer (CRC), is one of the most commonly diagnosed cancers amongst men and women with an overall 5-year survival of below 60%. (Siegel et al 2017; Trinh et al 2017). IHC has become an important application for the identification and classification of carcinomas of unknown primary site (CUPs, Selves 2018) and shows great promise in the identification of different CRCs.

Here we look at some of the most common primary IHC markers for CRC and cell type specific biomarkers. We also recommended specific IHC antibodies for each biomarker. 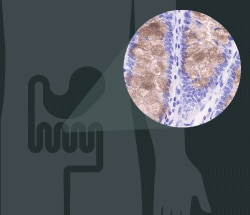 Calretinin is a calcium-binding protein that plays a role in message targeting and intracellular calcium buffering. While absent in normal colonocytes, it is expressed in most poorly differentiated colon carcinomas (Vonlanthen et al 2007). Strongly positive calretinin staining in colon medullary carcinoma, as well as correlations between the expression of calretinin and degree of differentiation in human colorectal adenocarcinomas, have been reported emphasizing the potential of calretinin as an IHC biomarker for bowel cancer (Gotzos et al 1999; Winn et al 2008).

MUC2 is part of the mucin family and characteristically observed in goblet cells of small and large bowel mucosa (Betge et al 2016). It is involved with coating the epithelia of the intestines, airways, and other mucus membrane-containing organs. Loss of MUC2 expression has been reported to be a predictor of adverse outcome and further prospective studies that evaluate adjuvant chemotherapy in stages II and III colon cancer should include MUC2 expression analysis for patient stratification (Betge et al 2016). 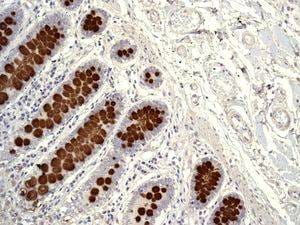 Immunohistochemical analysis of paraffin embedded human colon tissue labeling MUC2 with ab133555 at a dilution of 1/100.

COX-2 is an inducible enzyme that regulates prostaglandin synthesis and is overexpressed in several epithelial cancers. It is involved in the regulation of apoptosis, angiogenesis, and tumor cell invasiveness which contribute to its effects on tumorigenesis. Multiple studies have shown that selective COX-2 inhibitors are a great targeted approach to the chemoprevention of CRC (Sinicrope et al 2004; Herendeen et al, 2003).

CDH17, also known as LI Cadherin, is one of a group of cadherins that act as calcium-dependent cell adhesion proteins that preferentially interact with themselves in a homophilic manner in connecting cells (uniprot.org).  High CDH17 expression has been associated with liver metastasis, a major cause of death associated to colorectal cancer, and poor survival of patients (Bartolomé et al, 2013). 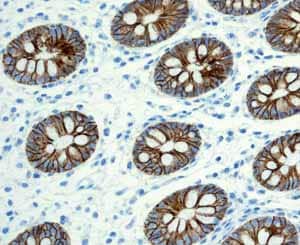 The GPA33 gene codes for A33 antigen, a transmembrane glycoprotein that is expressed in normal colonic and small bowel epithelium as well as more than 95% of human colon cancers (Heath et al, 1997). IHC in CRC tissue has shown strong A33 membrane staining in samples of well-differentiated tumors (Baptistella et al, 2016), and there are also proposals for using antibodies to GPA33 as a potentially potent radioimmunotherapy regimen for GPA-33 positive CRC tumors in humans (Cheal et al, 2017).IHC stain: cell membraneRecommended antibody: Recombinant Anti-GPA33 antibody [EPR4240] (ab108938)

VEGF is a heparin-binding glycoprotein with potent angiogenic activity within endothelial cells. Angiogenesis is crucial for the progression of colorectal carcinoma. VEGF is expressed in around 50% of colorectal cancers and shows very low expression in normal colonic mucosa making it a good biomarker for the diagnosis of CRC from histology samples (Bendardaf et al., 2008).

The tumor suppressor p53 is a transcription factor involved in cell cycle arrest and apoptosis under cellular stress. Mutations within p53 is one of the most frequent triggers leading to the progression of CRC and is found in 34% of the proximal colon tumors, and 45% of distal colorectal tumors. Patients with mutant p53 have a poorer prognosis than those with wild-type p53 (Li et al., 2015).

Ki67 is an important protein involved in cell division and is commonly used as a marker of cellular proliferation. Quantifying Ki67 expression by IHC will give you the Ki67 labeling index which is commonly used in clinical pathology to estimate cancer prognosis. High Ki67 expression is thought to be an indication of a good prognosis for patients with colorectal cancer. Ki67 IHC stains are therefore a good biomarker for CRC (Melling et al., 2016).

IGFBP-2 interacts with the extracellular matrix, proteoglycans and integrin receptors within many different cell types. It may also act as a transcription factor to stimulate gene expression. Studies have shown that IGFBP-2 is uniquely distributed at the bottom of human colonic crypts and that increased levels of IGFBP-2 can be seen in many colorectal cancers.  This expression co-localizes with the phosphorylated p65 subunit of NF-kB making these good biomarkers for CRC (Ben-Shmuel et al., 2013).

The M2 isoform of PK (PKM2) is a glycolytic enzyme involved in aerobic glycolysis and anabolic metabolism in cancer cells. PKM2 also promotes the transcription of Oct-46, HIF-1α7, STAT38, and β-catenin during the progression of various cancers. PKM2 is expressed in normal colon tissues but is often overexpressed in colorectal cancers including colitis-induced colorectal cancers (Kim et al., 2019).

CDX2 is a transcription factor expressed specifically in the intestine where it is involved in the maintenance of intestinal cell types. Low CDX2 expression in CRC is associated with advanced stages of cancer progression, vessel invasion, and metastasis. Over 20% of CRC show some reduction of CDX2 protein by histology. Seeing normal or high levels of CDX2 expression is a biomarker for a good prognosis for survival from the disease (Graule et al., 2018).

Villin is an actin-binding protein expressed in the epithelial cells lining the gut and has been shown to regulate epithelial-mesenchymal transition (EMT) in colorectal cancers. Microsatellite instability (MSI) colorectal cancers have also been shown to have very low levels of Villin expression compared to normal gut epithelial cells. This loss of Villin leads to poorly differentiated histology of the CRC (Arango et al., 2012).