Lung cancer is one of the leading causes of cancer-related death worldwide, accounting for approximately one-third of cancer-related deaths (Siegel et al., 2012). The diagnosis of different lung cancers relies heavily on the use of IHC-based diagnostic tests and continued research into lung cancer biomarkers focuses on those that can be used in IHC. There is an increasing number of antibodies available for detecting lung cancer-specific biomarkers used to determine different types of lung cancer and their cells of origin. These different cancer types include; adenocarcinoma, squamous cell carcinoma, and large cell carcinoma.

Here we look at some of the most common primary IHC markers for lung cancer and metastatic markers. We also recommended specific antibodies for each biomarker for use in IHC. 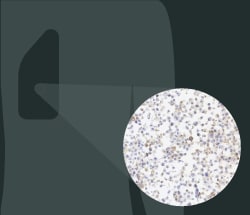 AHR is a transcription factor highly expressed in bronchial epithelial cells where it affects cell proliferation, differentiation, and cell-cell adhesion. It plays a key role in diseases such as bronchitis and asthma, but it is also strongly implicated in the progression of lung cancer. It does this through the promotion of cell proliferation, angiogenesis, inflammation, and apoptosis (Tsay et al., 2013). AHR expression is also linked with smoking-related tumors as it may upregulate CYP1A1 releasing harmful factors into the lung tissue. It is, therefore, a marker of poor prognosis for lung cancer patients (Tsay et al., 2013).  IHC stain: nuclear and cytoplasmRecommended IHC antibody: Anti-Aryl hydrocarbon Receptor antibody (ab84833)

PD-L1 is a transmembrane protein which acts by inhibiting T cell activation and proliferation. PD-L1 protein detection by IHC testing is widely used as a predictive biomarker assay for anti–PD-1/PD-L1 therapies for several cancer types including lung cancer. Non-small cell lung cancer (NSCLC) accounts for 75% of all lung cancers and approximately 50% of NSCLC cases will have expression of PD-L1 in histology carried out on patient biopsies making it a strong biomarker for this cancer type. 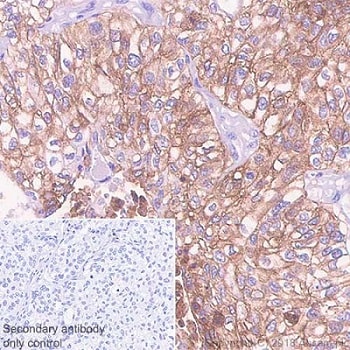 Programmed death-1 receptor is the receptor to transmembrane ligand PD-L1 (above) and is found to be expressed on the surface of T-cells. Tumors use this PD-1/PD-L1 interaction to evade and suppress the immune response. These interactions are commonly seen in NSCLC as described above for PD-L1. Nivolumab; an anti-PD-1 drug is approved for use in squamous NSCLC (Chen et al., 2012).

SPA is a large protein expressed within alveoli cells of the lung and is responsible for fighting infectious disease and reducing alveoli surface tension. SPA is also a biomarker used to detect adenocarcinoma in the lung. It is thought to be a marker of good prognosis as SPA is known to reduce tumor progression in the lung by recruiting natural killer cells to the site of the tumor (Mitsuhashi et al., 2013).

SOX2 is a transcription factor that plays a crucial role in the developing embryonic lung. It is also important for the formation of the proximal airways where it is used as a marker of proliferation and lung stem cells. It is also found to be overexpressed in over 80% of patients with lung squamous cell carcinoma (LSCC), a type of NSCLC. It is therefore commonly used as a marker of lung cancer cells derived from this squamous cell lineage (Mollaoglu et al., 2019).

The MET proto-oncogene is a transmembrane tyrosine kinase receptor and its signaling cascade is involved in proliferation, apoptosis, and cellular migration. It also plays a role in the progression of NSCLC. Overexpression of MET in NSCLC leads to a misregulation of proliferation and cell migration leading to a more aggressive cancer (Salgia et al., 2017).

Fas (or apoptosis antigen 1 APO-1) is a death receptor expressed on the cell surface which mediates apoptosis. Misregulation of apoptosis in normal cell types can lead to the progression of cancer. (FasL the FAS ligand) overexpression has been shown as a prognosis of advanced cancer stage in NSCLC (Viard-Leveugle et al., 2003).

GSTP1 is an enzyme responsible for breaking down toxic compounds. In the lung, GSTP1 is highly expressed and is known to carry out the metabolism of carcinogens carried into the lung through smoking. Certain variants of GSTP1 are used as markers of lung cancer prognosis. The Ile105Val variant is associated with a reduced risk of lung cancer and a reduction in mortality from the disease (Nørskov et al., 2017).IHC stain: cytoplasmRecommended IHC antibody: Recombinant Anti-GST3 / GST pi antibody [EPR8263] (ab138491)

Ki67 is an essential protein involved in cell division and is commonly used as a marker of cellular proliferation. IHC staining for Ki-67 is a commonly used method for evaluating proliferative activity in various tumor types including lung tumors. Studies suggest a key role of Ki-67 as a prognostic marker of NSCLC (Kriegsmann et al., 2016).

MCM7 is a chromosomal maintenance protein important during the cell cycle and has been associated with various cancer types including lung cancers. Both MCM7 and ki67 (the proliferation marker) are highly expressed in squamous cell carcinomas of the lung. Both are associated with poor prognosis in the disease. MCM7 can also be used as an IHC biomarker from bronchial brushings (Liu et al., 2012).

ASCL1 is a transcription factor necessary for neuroendocrine lung development and the growth of both SCLC and NSCLC. It acts as a marker of poor prognosis in NSCLC and looks promising as a potential druggable target for the treatment of NSCLC (Augustyn et al., 2014).

Increased levels of CRP are an indication of inflammation. It is commonly seen to be expressed in lung cancer patients who smoke. Smoking leads to chronic lung inflammation and the upregulation of several inflammation response genes including CRP. Expression of CRP is a marker of lung squamous cell carcinomas and small-cell cancers but not adenocarcinoma of the lung (Chaturvedi et al., 2010).IHC stain: secreted proteinRecommended IHC antibody: Recombinant Anti-C Reactive Protein antibody [Y284]

MCM6 is a chromosomal maintenance protein important for the cell cycle and mitosis and has been associated with increasing the metastatic potential of various cancer types including lung cancers. It has been shown to be expressed in around 50% of NSCLC patient samples and high expression levels of MCM6 is linked to a poor prognosis of this disease. Its expression is also seen to be higher in patients who smoke (Liu et al., 2017).

KIAA1522 is a relatively unknown protein but it has been recently implicated as a potential novel biomarker for NSCLC. This uncharacterized gene has been pulled out of a few large-scale screening studies looking to identify new biomarkers for NSCLC. Further experiments showed that KIAA1522 is highly expressed in the NSCLC tissues and indicates poor survival of NSCLC patients (Liu et al., 2016).