Studies have shown that greater harmonization of pre-treatment assessments is essential.

As a result of Nobel Prize-winning research that began in the 1990s, there are now six antibody drugs on the market that target either the PD-1 immune checkpoint or its corresponding ligand, PD-L1. In many of the clinical trials exploring the expanded use of these agents, the treating physicians use immunohistochemistry (IHC) techniques to assess the level of PD-L1 expressed in the patient’s tumor, either to help them make treatment choices or to aid the interpretation of results. However, the variety of antibodies used in PD-L1 IHC complicates the picture that emerges.

The Nobel Committee awarded the 2018 Prize in Physiology or Medicine to immunologists James Allison of the MD Anderson Cancer Center and Tasuku Honjo of Kyoto University for independent discoveries in the 1990s of molecular control systems in cells of the immune system.1-4 These discoveries led to the development of a set of new therapies – the checkpoint inhibitors – that have proved effective treatments in a wide range of difficult cancer types.

Each of the six PD-1/PD-L1 checkpoint inhibitor drugs (Table 1) is a different humanized antibody that binds either to PD-1 or to PD-L1, thereby blocking the immune-dampening interaction between the two components.

One key finding from completed clinical trials is that the response rate or clinical outcomes correlate with the amount of PD-L1 associated with the tumor cells (as assessed immunohistochemically). Higher levels of the PD-L1 biomarker are associated with better patient responses.

Consequently, many of the current clinical trials of PD-1 or PD-L1 inhibitors – 350 of the current 1,600 trials – use an IHC assessment of PD-L1 expression levels either to guide treatment choices or to aid interpretation of results.

A 2018 study of PD-L1 expression in non-small cell lung cancer highlighted that there is a consensus among cancer physicians that PD-L1 expression on tumor cells is a predictor of responsiveness to PD-1 inhibitors in several tumor types.5 But it is not yet a definitive marker, because, as the study points out, PD-L1 tests are not uniform. How the tests are conducted complicates analysis and obscures comparisons of different drugs’ performances.

Each of the approved PD-1/PD-L1 inhibitors (except cemiplimab-rwlc) has a different diagnostic method associated with it (some FDA-approved, others for research use only). Within those methods, the staining platforms may vary, but the primary antibody differs in every case.

There are two further variables. One is that the diagnostic method may assess PD-L1 levels either throughout the tumor tissue or within immune cells that infiltrate it.

To try to resolve some of this variability, an international group of pathologists looked at the feasibility of harmonizing the clinical use of the five commercial PD-L1 IHC assays.

BP2 assessed two key variables in the PD-L1 IHC. Firstly, how do different pathologists vary in interpreting the same slides? And secondly, how does the same tissue specimen vary when prepared by staining methods that use different antibodies?

Reassuringly, the pathologists were remarkably consistent in scoring stained tumor cells samples: Across all samples, the interclass correlation coefficient (ICC) was between 0.88 and 0.93 (ICC scores of 0.75–0.9 are regarded as good, and those above 0.9 are excellent).

However, there was more variation between pathologists in scoring the staining of immune cells, rather than tumor cells. Using the Fleiss kappa statistic, the consistency scores in interpreting glass slides ranged from 0.11–0.28 and were 0.08–0.27 in digital image readers; both ranges reflecting a low level of agreement between pathologists.

One conclusion of the Blueprint phase 2 study, therefore, was that scoring PD-L1 staining of the infiltrating immune cells remains “challenging.”

The other aspect of BP2 was a comparison of the results obtained using different assay methods. Just like in previous research, BP2 showed that three of the five assay systems used generate staining results that are consistent with each other. The IHC protocols that deployed antibodies designated 22C3, 28-8, and SP263 showed very similar levels of sensitivity. These are the antibodies used in the diagnostics that the FDA has approved for use with pembrolizumab, nivolumab, and durvalumab, respectively.

However, the IHC protocol using the SP142 antibody was consistently less sensitive than these three: It stains fewer tumor cells than other assays, meaning that fewer patients would be designated as “PD-L1 positive”.

In contrast, the protocol that used the 73-10 antibody was more sensitive than the group of three. It stained more tumor cells and could, if approved for clinical use, lead to more positive PD-L1 designations.

The most likely source of variation is the antibody used, although the Blueprint 2 study does not explicitly state this. The three protocols deploying Dako reagents, for instance, were designed to work with the same visualization and autostaining system and yet the assay sensitivity was much higher when the primary antibody was 73-10 rather than 22C3 or 28-8.

Similarly, both the SP142 and SP263 antibodies were intended for use with visualization and staining instruments from Ventana but using the SP263 reagent produces more PD-L1 staining that does SP142.

A comparison of three antibody systems used in PD-L1 assessment in breast cancer proposed that differences in epitope binding could be an important source of variability.7 Researchers comparing antibody clones for PD-L1 IHC detection also noted extensive epitope binding variation.8 At a crude level, some antibodies (73-10 and SP142) bind to intracellular epitopes and others to extracellular epitopes (28-8) of PD-L1.9 However, in the Blueprint study, SP142 provided the least sensitivity in PD-L1 detection and 73-10 the most. 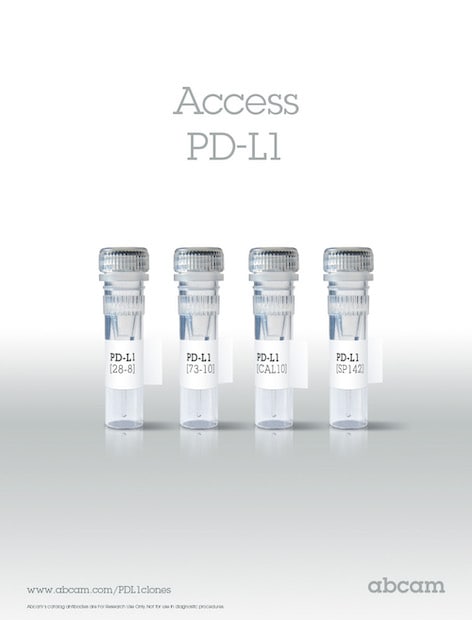 Clearly, a simple binary distinction between intracellular and extracellular epitope binding cannot explain all the variability observed. Other aspects of antigen binding that might affect assay sensitivity include affinity, on-off kinetics or the binding of the secondary antibody to the primary antibody.

While some PD-L1 IHC protocols are consistent with each other, other protocols are optimized to deliver more, or less, sensitive IHC results. This makes it difficult to compare the disease status of patient cohorts across the clinical trials of different PD-1 or PD-L1 inhibitors.

Furthermore, if less sensitive protocols are used, patients who would qualify as PD-L1 positive for one inhibitor might not qualify for another. Conversely, a more sensitive assay system may mean that patients who will derive less benefit from PD-1/PD-L1 drugs may still qualify for their use.

Checkpoint inhibitors represent a growing part of the oncologist’s arsenal, especially in combatting the most aggressive types of cancer. Without greater harmonization of pre-treatment assessments, however, some of the clinical decision-making might be less rational than patients deserve.