Prostate cancer is the second most common cancer in men worldwide. IHC is used for diagnosis from prostate biopsy, though this remains controversial as to the precision and accuracy of the current biomarkers used in this test and many are looking for alternative specific and sensitive prostate cancer biomarkers to improve outcomes. (Jiang et al. 2013).

There remains a lack of reliable biomarkers to accurately predict low-risk cancer and avoid overtreatment. As such, aggressive forms of prostate cancer may be missed and indolent disease may be subjected to unnecessary radical therapy. New biomarker discovery and validation promise to improve early detection and prognosis and to provide targets for therapeutic interventions (Giannico et al. 2017). 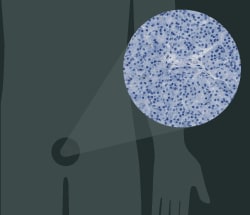 PSA is the most widely known biomarker for prostate cancer. It is expressed in prostate epithelial cells and secreted to the seminal fluid, where it plays a role in its liquefaction. PSA is considered to be a highly sensitive and specific biomarker for prostate tumors. It was approved by the FDA for the diagnosis of prostate cancer in conjunction with the digital rectal exam in 1994. Consequently, the detection of PSA in additional tissues via IHC is typically associated with metastatic cancer of prostatic origin, and the presence of this biomarker is often used to differentiate between prostatic and urothelial carcinomas (Saini, 2016).

AMACR is a mitochondrial and peroxisomal enzyme that functions to oxidize fatty acids and bile acid intermediates. It is over-expressed in the epithelium of approximately 80% of prostate cancer cases, and acts as a robust biomarker of prostate cancer. Detection of AMACR via IHC has been shown to be important in the differential diagnosis of prostate carcinoma from benign prostate mimics. AMACR overexpression in prostate cells is indicative of poor patient prognosis, associated with a high Gleason’s score, high initial PSA levels, and indicative of the increased chance of bone metastasis (El Kassem et al., 2016).

SLC45A3 shows a predominantly homogenous Golgi staining pattern in prostatic epithelia. It is highly specific for prostate glandular cells, and thus used in the differentiation of metastatic prostate cancers from other tumor types. SLC45A3 may be expressed in PSA-negative prostate tumors, and the use of these markers in conjunction offers increased sensitivity in the identification of prostate cancer metastases (Sheridan, 2007). Weaker expression of SLC45A3 has been noted in some aggressive tumors, correlating with increased Gleason scores and risk of cancer relapse.