In early 2000, Professors Hanahan and Weinberg proposed that when cells progress towards a neoplastic state, they acquire distinctive capabilities1. These were termed hallmarks of cancer and formed a useful framework in which to understand tumor pathogenesis. They include sustaining proliferative signaling, evading growth, suppressors, resisting cell death, enabling replicative immortality, inducing angiogenesis, and activating invasion and metastasis. There were all underpinned by genome instability and mutation.

Here we provide the relevant markers and tools to study these important hallmarks of cancer. 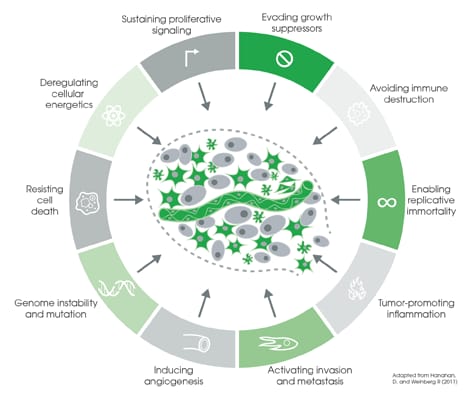 Cancer cells are highly proliferative. This feature means that there is an increased tendency for genomic changes and mutations in these cells that affects cell division and tumor suppression genes. This instability promotes further cancerous adaptations in cells. Changes may arise through direct DNA mutations or through epigenetic modifications that can change protein expression levels and affect genomic integrity.

Precision cancer therapies have been targeted to checkpoint kinases of the cell cycle, such as Chk1 and Chk2 proteins, and DNA damage repair enzymes, such as BRCA and 53BP1.

Tumor cells can achieve unlimited replicative potential either by synthesizing high levels of telomerase enzyme or via a recombination-based mechanism. This prevents telomere shortening which leads to senescence and apoptosis. However, many cancer cells have been shown to possess short telomeres.

Key targets include the telomere maintenance machinery along with signaling pathways such as Wnt and HIPPO.

Key targets for these pathways include Bcl-2 and Caspases in apoptosis and proteasomal and lysosomal pathways, such as MAPK, ATG, and p62, in autophagy.

This hallmark refers to cancer cells preventing apoptosis through intrinsic mechanisms, rather than a lack of response to external stimuli. Cancer cells may contain mutations that prevent damage detection or prevent apoptotic signaling within the cell.

See our guide to apoptosis

Autophagy has an important role in allowing cells to survive in response to multiple stress conditions. Tumor cells exploit this autophagic mechanism as a way to overcome nutrient-limiting conditions and facilitate tumor growth. Autophagy can modulate the tumor microenvironment by promoting angiogenesis, supply nutrients, and modulate the inflammatory response.

See our guide to autophagy

Caspase-8, Bcl-2 and, p53 are among key apoptotic signaling proteins that are known to be mutated in many cancers.​

Due to their excessive growth, cancer cells require high levels of energy and nutrients with the ability to survive in hypoxic environments, as they are not completely vascularized. To meet these needs, many of the cellular metabolic pathways are altered in cancer. The Warburg effect concerns the altered glycolytic metabolism that occurs in cancer cells, where pyruvate is diverted from the Krebs cycle to lactate production under oxygen conditions. Cancer cells are also known to increase glutamine metabolism to promote cell proliferation.

Key targets for the control of the hypoxic tumor environment include HIF-1α and AMPK that switches to a tumor promoter acting to protect against metabolic, oxidative, and genotoxic stress.

Growth of the vascular network is important for metastasis as cancer cells require a sufficient supply of nutrients and oxygen, as well as a means of waste removal. This is achieved by angiogenesis and lymphangiogenesis, respectively.

Learn more about the role of VEGF in angiogenesis

The human immune system protects against foreign pathogens and diseases, but it also plays a very important role in clearing the body’s own unhealthy and ailing cells. As such, the immune system is also capable of recognizing and eliminating cancer cells.

T cells have the capacity to selectively recognize and kill pathogens or unhealthy cells by orchestrating a coordinated immune response that encompasses but the innate and adaptive responses.

Immune checkpoint targets such as PD1/PD-L1, TIM3, and LAG3 are all critical checkpoint molecules that have revolutionized cancer immunotherapy.

See our pathway that outlines the immune checkpoint pathway
​

Signaling within the tumor microenvironment (TME) operates to hijack the immune cells to promote tumor survival. The immune cells in the TME secrete factors that allow growth and metastasis, rather than recognizing and destroying the cancerous cells.

Normal cells depend on the growth signaling of a tightly-regulated cell cycle to proliferate and maintain tissue homeostasis. This cycle is disrupted in cancer. Cancer cells release and respond to their own growth factors to stimulate growth, overcoming the requirement for external growth factors, such as epidermal growth factor (EGF/ EGFR).

This self-sufficiency in cell proliferation is driven via three main signaling pathways: Akt, MAPK/ERK, and mTOR.

Cell proliferation can be used to assess normal cell health, to measure responses to toxic insult, or as a prognostic and diagnostic tool in several cancers.  The available markers typically look at DNA levels or synthesis, cellular metabolism, or proliferation-specific proteins.​

For a look at the most common methods to mark and score cell proliferation see our guide.

Activation of invasion and metastasis

Tissue invasion is the process that allows tumor cells to expand into nearby tissues. Metastasis is the process of tumor cells migrating from the primary tumor site to a new distant location and establishing secondary tumors. The well documented epithelial-to-mesenchymal transition is a key process in these mechanisms, allowing uninhibited cell division and metabolic adaptations that enable cell survival under nutrient-limiting and stress conditions.

Both of these cancer mechanisms involve extensive changes to cell-cell and cell-matrix interactions and cellular transformation to allow invasion and migration, including targets such as Collagen and CEACAM1.