Find out how to identify necroptosis, pyroptosis and ferroptosis.

Distinguishing between different forms of non-apoptotic cell death can be challenging, especially as many share similar morphological features. However, the distinct regulatory pathways involved with each provide distinct protein markers that can be used for their detection.

Whether you are looking at necroptosis, pyroptosis or ferroptosis, a combination of different approaches should be used. The study of non-apoptotic cell death should use both specific positive indicators of the cell death mode of interest, coupled with other cell viability assays and techniques to rule out apoptosis1.

Necroptosis is a programmed form of necrosis that is dependent on activation of receptor-interacting kinase 3 (RIPK3)2 and the mixed lineage kinase domain-like (MLKL) pseudokinase3. This form of cell death is morphologically distinct from apoptosis, involving membrane rupture and release of cytoplasmic contents.

Necroptosis is activated in response to death receptor activation, although some death receptor-independent pathways are also a trigger. In most contexts, necroptosis is inhibited by proapoptotic caspase 84–6; certain intracellular pathogens suppress apoptosis by inhibiting caspase 8, and necroptosis plays a role as a back-up to eliminate infected cells7. 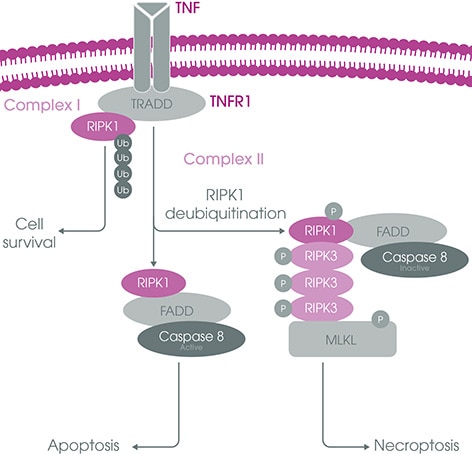 Key proteins in the necroptotic pathway

MLKL is activated by RIPK3-mediated phosphorylation. The activation state of MLKL can be determined by measuring the phosphorylation status of Thr357 and Ser358. Phospho-MLKL is detected by antibody-based methods, including western blot, IHC, and flow cytometry.

Targeting components of the necroptotic pathway – either by chemical inhibition or with transgenic models – can be used to tell whether cell death is dependent on necroptosis.

Pyroptosis is an inflammatory caspase-dependent form of programmed necrosis that occurs in response to microbial infection. Morphologically, pyroptotic cells display cell swelling and rapid plasma membrane lysis. Pyroptosis can be studied by looking at caspase activation, gasdermin D cleavage, or by inhibiting or ablating key components of the pyroptotic pathway.

Key components of the pyroptotic pathway

Active caspases are cleaved from their inactive pro-caspase forms during pyroptosis. Caspase cleavage can be detected by western blot, using a specific caspase antibody.
​

Showing dependence on caspase 1, 11, 4 or 5 is essential to distinguish pyroptotic cell death from other forms of necroptosis and apoptosis. Determine if cell death still occurs after ablation of these caspases, either by chemical inhibition or using transgenic models.

Caspase 1 activity can be ablated by chemical inhibition with z-YVAD-fmk (ab141388).

Ferroptosis is an iron-dependent form of cell death that occurs as a consequence of lipid reactive oxygen species (ROS) production16. Cells undergoing ferroptosis exhibit subtle morphological features, including smaller-than-normal mitochondria with increased density. The presence of ferroptosis can be confirmed by looking at whether cell death is prevented by inhibitors, and by measuring lipid peroxides.

Key proteins in the ferroptotic pathway

The presence of ferroptosis can be confirmed using chemical inhibitors known to prevent ferroptosis. As ferroptosis is caused by reduction of GPX4 activity, knockdown is not an effective method.

Ferroptosis inhibitors and their modes of action:

Ferroptosis is dependent on lipid reactive oxygen species (ROS) accumulation. A number of methods are available to detect the presence of lipid ROS.

Methods to detect the presence of lipid ROS