​​​​​​​Learn about antibody-oligonucleotide conjugation, its types, and applications and access conjugation tools for your next experiment.

​​​​Antibody–oligonucleotide (Ab–oligo) conjugates have been used in numerous applications from diagnostics to therapeutics and were developed through an unmet need for precise and efficient detection of low-abundance proteins. Ab–oligo conjugates have since played a significant role in enhancing an extensive range of biological techniques that include immunological and proteomic research, biomarker discovery, clinical diagnostics – including point-of-care as well as other novel techniques. Antibodies can be readily conjugated to oligonucleotides via their amino acid residues, making them suitable for most in vitro applications, as they possess several functional groups.​

Amine conjugation
​Antibodies contain several amino groups (NH2), which can be distributed throughout as lysine (K/Lys) side chain epsilon-amine and N-terminal alpha-amino groups (see Figure 1). These residues are the two that are most often targeted for conjugation as they can easily be modified owing to their steric accessibility. Apart from amino groups, glutamic acid and aspartic acid residues can also be conjugated, as well as carboxylic acid (-COOH) residues via their C-terminal end. However, the numerous amino and carboxylic acid functional groups distributed on the surface of antibodies, means that the method of conjugation used may potentially result in partially active/inactive Ab–oligo conjugates that may not bind to the antigen, ie reduced affinity, due to steric hindrance of conjugated residues located on the antigen-binding sites.​

​​​​Figure 1. Schematic structure of an antibody showing the location of functional groups (-NH2, -COOH, and S–S) that are often targeted for oligonucleotide conjugation.​​

​​Conjugation is also possible via a reactive thiol (sulfhydryl) group. Antibodies contain oxidized sulfhydryl (-SH) groups present as disulfide (S–S) bridges, which contribute to the tertiary structure of the antibody. These disulfide bridges must be reduced to expose their reactive groups by a reducing agent (eg 2-ME / SDS).

Antibodies can be selectively cleaved to create either two half antibody molecules or smaller antibody fragments such as F(ab’)2. Conjugation using the ‘hinge’ region free/reduced -SH group also orientates the attached oligonucleotide away from the antigen-binding regions, hence preventing steric hindrance and preserving activity.​

Carbohydrate conjugation
An alternative method of site-directed conjugation can occur at carbohydrate residues, which occur mainly in the Fc region, as they are less susceptible to steric hindrance due to their remoteness from antigen-binding sites. For conjugation via this complex method, the carbohydrate group must be oxidized to an aldehyde (-CHO) using periodic acid. An advantage is that Ab–oligos produced via site-specific conjugation techniques have distinct advantages for in vivo applications.

Immuno-polymerase chain reaction (immuno-PCR)
​Immuno-PCR is a powerful technique that is similar to an ELISA, as an antibody is used to detect and quantify a specific antigen (analyte) from a mixed sample. However, in immuno-PCR, the Ab–oligo conjugate binds to the immobilized analytes, followed by amplification of the attached DNA using RT-PCR (see Figure 2).

The use of Ab–oligo conjugates in immuno-PCR provides a highly sensitive method for protein detection and quantification, which is significantly superior to a standard ELISA as it combines both the detection specificity of an antibody with the nucleic acid detection sensitivity of RT-PCR. The coupling of immunodetection to RT-PCR has been a standard technique for more than 20 years.

Owing to the enormous amplification capability, specificity, and increased sensitivity given by immuno-PCR, lower limits of detection, which surpass ELISA by 100- to 10,000-fold, are available. Products arising from amplification can then be visualized using gel electrophoresis so that the presence of bound analytes can be established.​

This technique utilizes two Ab–oligo conjugates bound nearby (30–40nm apart) to different epitopes of the same protein, or two proteins in a complex. The cells/tissue must be fixed with a fixative that is appropriate for the antibodies used in the protocol. If required, antigen retrieval and antibody-specific blocking must also be performed. ​ 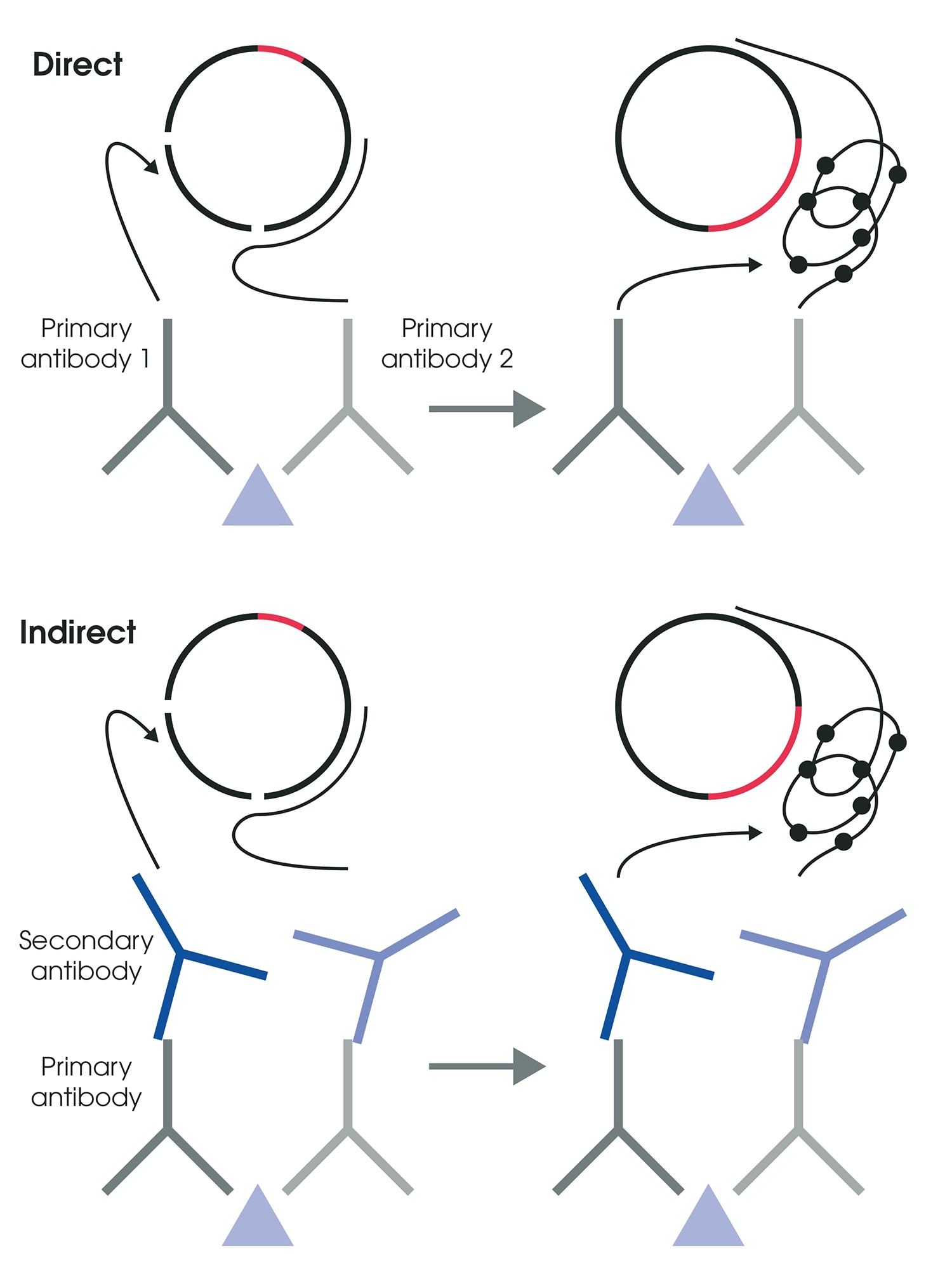 ​​Two different methods exist for PLA: direct and indirect (see Figure 3). The direct primary method uses Ab–oligo conjugates, and the indirect method uses unmodified primary antibodies that are detected with secondary Ab–oligo conjugates. In either method, two additional ‘connector’ oligonucleotides are introduced and ligated to the Ab–oligo, leading to the formation of a circular, single-stranded DNA molecule.

One of the Ab–oligo conjugates serves as a primer for rolling circle amplification (RCA) of the single-stranded DNA circle template. When DNA polymerase is added, a long product is formed that remains covalently attached to one of the PLA probes. When RCA is complete, multiple repetitions of the same sequence allow hybridization by many detection oligonucleotides for microscopic quantification.

Figure 4. Schematic of the principles of ECPA.

EPCA uses the proximity effect of two Ab–oligo conjugate probes bound to a protein target to move an electrochemically active label – methylene blue (MB), closer to a gold electrode with a preassembled thiolated DNA / competitor monolayer (Figure 4). In the presence of the protein target, the redox current in ECPA is quantified using square wave voltammetry (SWV) and is found to depend directly on the concentration of the target. ECPA may be useful for any protein with available antibody pairs.​

​​Figure 5. In a conventional immunoassay, cross-reactivity due to unspecific binding of antibodies limited the degree of potential multiplexing available.

​​Several methods are typically used for multiplex immunoassays, which loosely fit into two categories: immobilization on a solid surface, in which the assays for each analyte are spatially separated, or immobilization on beads or particles, in which the assays for each analyte are on a different bead/particle. Multiplex protein detection technology now takes advantage of the specific binding between two complementary strands of DNA, with one strand (analyte) for each cognate immobilized onto a solid support, eg a microtiter plate. The Ab–oligo conjugates are pooled and hybridized to their specific immobilized capture oligos in the well to create an antibody array (see Figure 6).

​​​​​Figure 6. Cross-reactive binding is not detected as only matched oligo-pairs are detected and reported (eg 3A+3B).​

Our technologies and services for easy Ab–oligo conjugation

Previously, the standard chemistry and methods used to link oligonucleotides to antibodies were difficult, time-consuming, and required expert scientific knowledge of chemical modification techniques. Nowadays, straightforward, efficient, and high yielding technologies have been developed for the quick and easy preparation of Ab–Oligo conjugates.

Features and benefits of the Oligonucleotide conjugation kit:

​​Figure 7. The Ab–oligo conjugation process. The Ab–oligo conjugation protocol consists of three main steps: activation of both the antibody and the oligonucleotide followed by desalting, after which the two are mixed and left to incubate overnight. If an unbound oligonucleotide removal step is necessary for the end application, this can be performed the next morning. Following this, the conjugate is ready to use.

Immuno-qPCR data with the Oligonucleotide conjugation kit
The top graph plots the number of qPCR cycles undertaken vs fluorescence intensity generated by SYBR green containing qPCR probes at specific antigen concentrations (see Figure 8). The bottom graph then converts this data to the antigen amount vs cycle number to permit calculation of a standard curve (see Figure 9).

Figure 9. A mouse monoclonal antibody specific for human CRP (clone C7) was purchased in unconjugated format from HyTest. The unconjugated antibody was conjugated to an oligonucleotide using the Oligonucleotide conjugation kit (ab218260) and was used as detection antibody in a sandwich immuno-PCR assay, with a polyclonal anti-CRP antibody as capture reagent. Graph depicts standard curve of amount of antigen versus cycle number.

Unfortunately, many antibodies are provided in buffers containing additives that are incompatible with labeling technologies, making purification a key consideration before carrying out any conjugation reaction. To help you, we have developed a range of purification kits that complement our labeling technologies. These are extremely easy and convenient to use and have been carefully designed to complement our bioconjugation kits. ​