​​Learn the role of various epigenetic targets and pathways in cancer with our comprehensive guide, which covers histone regulation, DNA and RNA modifications as well as polycomb and chromatin remodeling.

The link between epigenetics and cancer

Epigenetic mechanisms are essential for normal development and maintenance of tissue-specific gene expression patterns in mammals. Epigenetic modifications play a fundamental role in the regulation of processes such as transcription, DNA repair, and replication. Alterations of genes regulating epigenetic processes are frequently found as cancer drivers and may be caused by changes in DNA and RNA modifications, histone modifications, and nucleosome remodeling. Abnormal gene expression patterns can lead to the initiation and maintenance of various cancers.

Whole-genome sequencing studies demonstrated the presence of recurrent somatic mutations in numerous epigenetic regulators in various types of cancer1,2. Histone modifications such as acetylation and methylation are among the most widely affected epigenetic pathways in cancer. For example, mutations in a histone demethylase UTX (KDM6A) are shown in up to 12 histologically distinct cancers3.

The reversible nature of epigenetic modifications has led to the emergence of the promising field of epigenetic therapy. Multiple small-molecule epigenetic inhibitors are being developed for use in cancer therapies. Three of these inhibitors, targeting DNMTs, HDACs, and JAK2, have already gained approval by the US Food and Drug Administration (FDA). 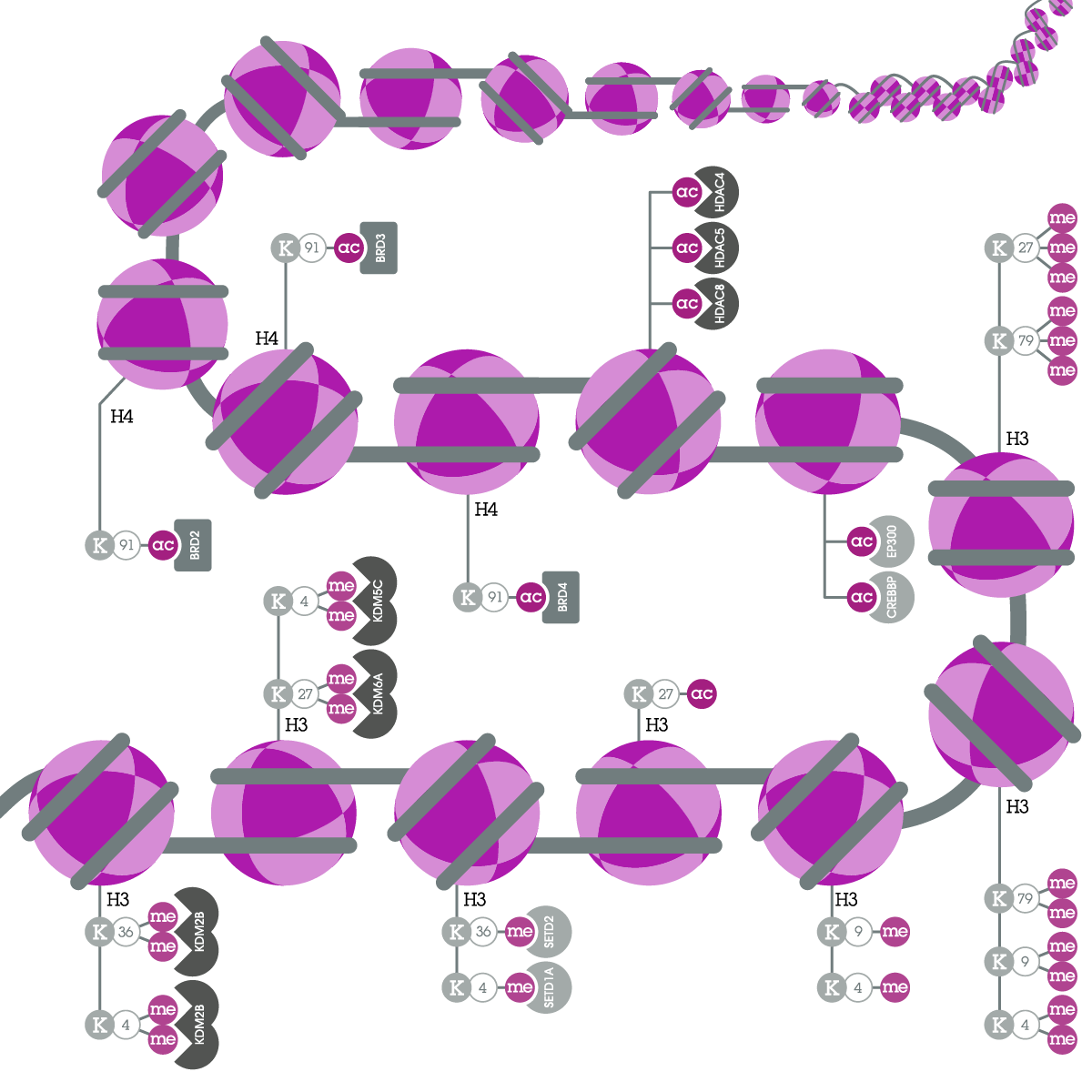 ​​​​Figure 1. Key histone proteins and their modifications involved in cancer.

Histone deacetylases (HDACs) are the family of 18 enzymes that reverse lysine acetylation and restore the positive charge on the histone side chain. The HDACs are overexpressed in numerous cancers, which results in a global loss of histone acetylation and silenced tumor suppressor gene expression.

The HDACs are divided into four major classes, depending on their sequence homology and structure. Class I HDACs (1, 2, 3, 8) and class II HDACs (4–7, 9, 10) have been reported to play roles in oncogenesis. HDAC4 is found to be a prognostic marker for pancreatic and ovarian cancers8, whereas HDAC5 may be a marker for liver, renal and cervical cancers9. Furthermore, numerous HDACs inhibitors are currently being developed as potential anti-cancer therapies10. HDAC8 is a promising novel target in cancer, and many potent HDAC8-selective inhibitors have been reported to exhibit cellular activity and anticancer effects11.

The histone acetylation marks on lysine residues are read by small protein modules, called “readers”. These protein modules are called bromodomains and include BRD2, BRD3, and BRD4, which are members of the BET family. BET proteins are essential for transcriptional elongation and cell-cycle regression. BET bromodomains represent a promising therapeutic target in cancer. Several studies demonstrated the possibility of the development of highly specific and chemically distinct small molecules against the BET family12,13,14.

Histones are methylated on the side chains of arginine, lysine, and histidine residues. Methylation, unlike acetylation and phosphorylation, does not alter the overall charge of the molecule.

The best-studied histones, implicated in lysine methylation, include H3K4, H3K9, H3K27, H3K36, and H3K79. Methylation is associated with activation or deactivation of gene expression14. Importantly, different methylation states (eg monomethyl me1, dimethyl me2, trimethyl me3) of the same lysine residue may have distinct functional consequences. For example, H3K4me2/3 usually spans the transcriptional start site of active genes15, whereas H3K4me1 modification is associated with active enhancers16. Similarly, H3K9me1 is found at active genes, while H3K9me3 is associated with gene repression15.

Histone methylation of lysine residues is carried out by highly specific enzymes called the histone lysine methyltransferases (KMT). Cytogenetic and NGS studies of various cancer genomes have demonstrated recurrent translocations and/or coding mutations in many KMTs, including MLL family members. Also, recurrent coding mutations have been reported in several histone demethylases such as KDM5A (JARID1A), KDM5C (JARID1C), and KDM6A (UTX). These recurrent mutations may significantly alter the catalytic activity of the methyltransferases or demethylases. Additionally, as many of these enzymes contain chromatin-reader motifs, the mutations may affect the ability of these proteins to survey and bind epigenetic modifications6.

Methylation of the 5-carbon of cytosine nucleotides is carried out by a family of DNA methyltransferases (DNMTs), which includes 3 active DNMTs in higher eukaryotes (Figure 2). DNMT1 is a maintenance methyltransferase that recognizes hemimethylated DNA generated during DNA replication and then methylates newly synthesized CpG dinucleotides, whose partners on the parental strand are already methylated19. DNMT3a and DNMT3b function primarily as de novo methyltransferases to establish DNA methylation during embryogenesis20.  Recurrent loss-of-function mutations in DNMT3A have been reported in up to 25% of patients with acute myeloid leukemia (AML)21. 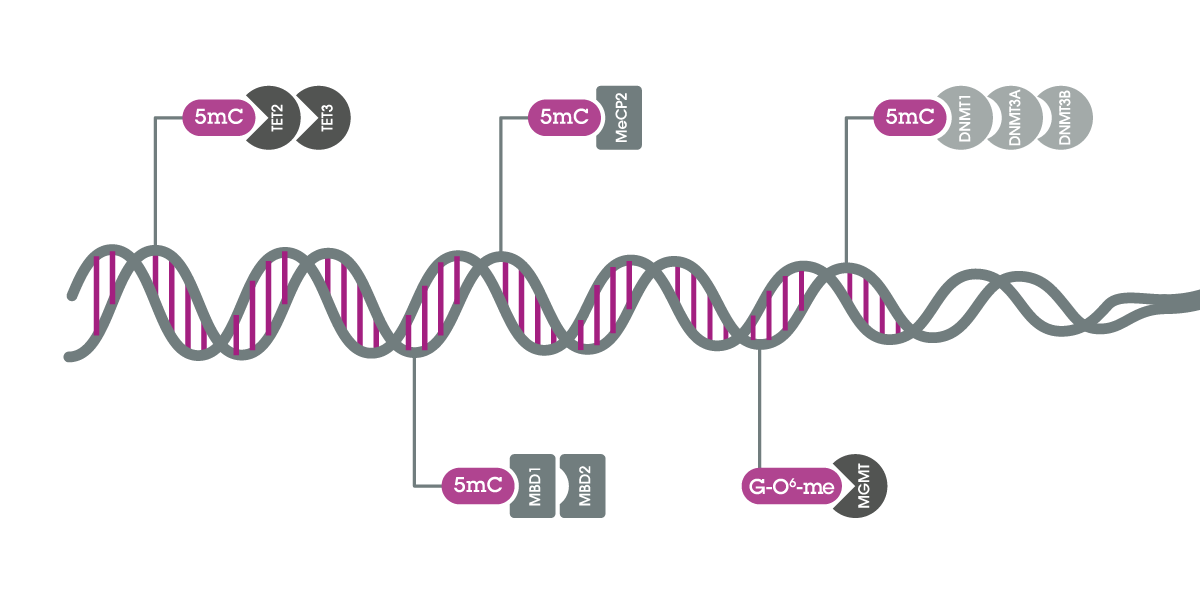 ​DNA methylation provides a platform for several methyl-binding proteins, including MBD1, MBD2, and MeCP2 (Figure 2). These proteins in turn function to recruit histone-modifying enzymes to coordinate the chromatin-templated processes22. MBD1, MBD2, and MeCP2 all act as transcriptional repressors and are implicated in various cancers. Thus, MeCP2 has been identified as a frequently amplified oncogene in several cancer types, including breast, lung, cervical, and uterine cancers23. MBD1 is involved in tumor development and progression of multiple cancers, including lung, prostate, and colorectal cancers24. Finally, MBD2 is essential for the maintenance and spread of DNA methylation at CpG islands and shores in cancer25.

DNA hydroxymethylation is another type of DNA modification, in which the hydrogen atom at the C5-position in cytosine is replaced by a hydroxymethyl group. The ten-eleven translocation (TET 1–3) family of proteins carries out DNA hydroxymethylation in mammals by catalyzing the successive oxidation of 5-methylcytosine (5mC) to 5-hydroxymethylcytosine (5hmC), 5-formylcytosine (5fC), and 5-carboxylcytosine (5caC)26,27. TET genes, and especially TET2, are frequently mutated and show reduced expression in various cancers. Thus, TET2 was found to mutate recurrently in numerous hematopoietic malignancies, including AML, MPD, MDS, CMML28,29,30. However, it is unknown how the TET proteins contribute to preventing the onset and maintenance of these malignancies31.

Non-coding RNAs are essential for normal development and may play a fundamental role in epigenetic regulation32. Small non-coding RNAs have a high degree of sequence conservation across species and are involved in transcriptional and post-transcriptional gene silencing through specific base-pairing with their targets. Long non-coding RNAs show poor sequence conservation across species and may act as molecular chaperones for various chromatin regulators33.

Similar to DNA, RNA is subject to a covalent modification such as methylation (Figure 3). Among all RNA modifications, N6-methyladenosine (m6A) is the most common, abundant, and conserved internal transcriptional modification, especially within eukaryotic messenger RNAs (mRNAs). m6A RNA modifications play an important role in RNA transcription, processing, translation, and metabolism and are associated with multiple diseases such as obesity, infertility, and cancer. In cancer, these modifications have been linked to the oncogenesis of multiple malignancies, including AML, glioblastoma, lung cancer, and others34. 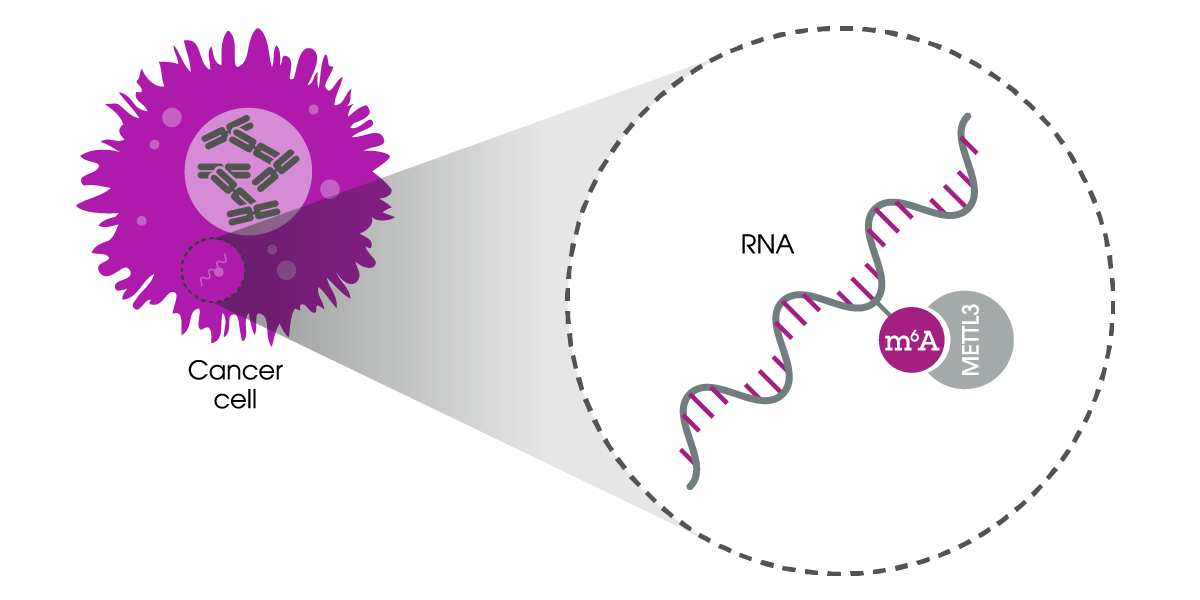 m6A methylation is a dynamic and reversible process coordinated by methyltransferases, such as METTL3, demethylases, and identifiers. METTL3 is involved in all stages of the life cycle of RNA. It plays a key role in pre-mRNA splicing, 3′-end processing, nuclear export, translation regulation, mRNA decay, and microRNA processing35. METTL3 affects tumor formation by regulating the m6A modification in the mRNAs of critical oncogenes or tumor suppressors. For example, METTL3 acts as an oncogenic signal in lung adenocarcinoma and as a tumor suppressor in glioblastoma36,37. METTL3 was also shown to be upregulated in various solid tumors, including hepatocellular carcinoma, associated with poor prognosis38.

RNA epigenetics (or epitranscriptomics) can present new opportunities for early-stage diagnostics and treatment of cancer. Thus, since METTL3 has been detected in multiple cancer types, targeting m6A-associated proteins might constitute a new form of cancer treatment39. For instance, novel small molecule inhibitors of METTL3 have been demonstrated as an effective therapeutic strategy in AML40.

You can find more detailed information on RNA modifications here.
​If you are particularly interested in the m6A pathway, check out our m6A pathway and functions poster.

​​If you want to learn more about the research on METTL3 in AML, watch our webinar “Drugging the epitranscriptome as an effective anti-cancer strategy”, presented by Dr Konstantinos Tzepelis from the Milner Therapeutics Institute (University of Cambridge, UK).

You can find more detailed information on RNA modifications here.
If you are particularly interested in m6A pathway, check out our m6A pathway and functions poster. 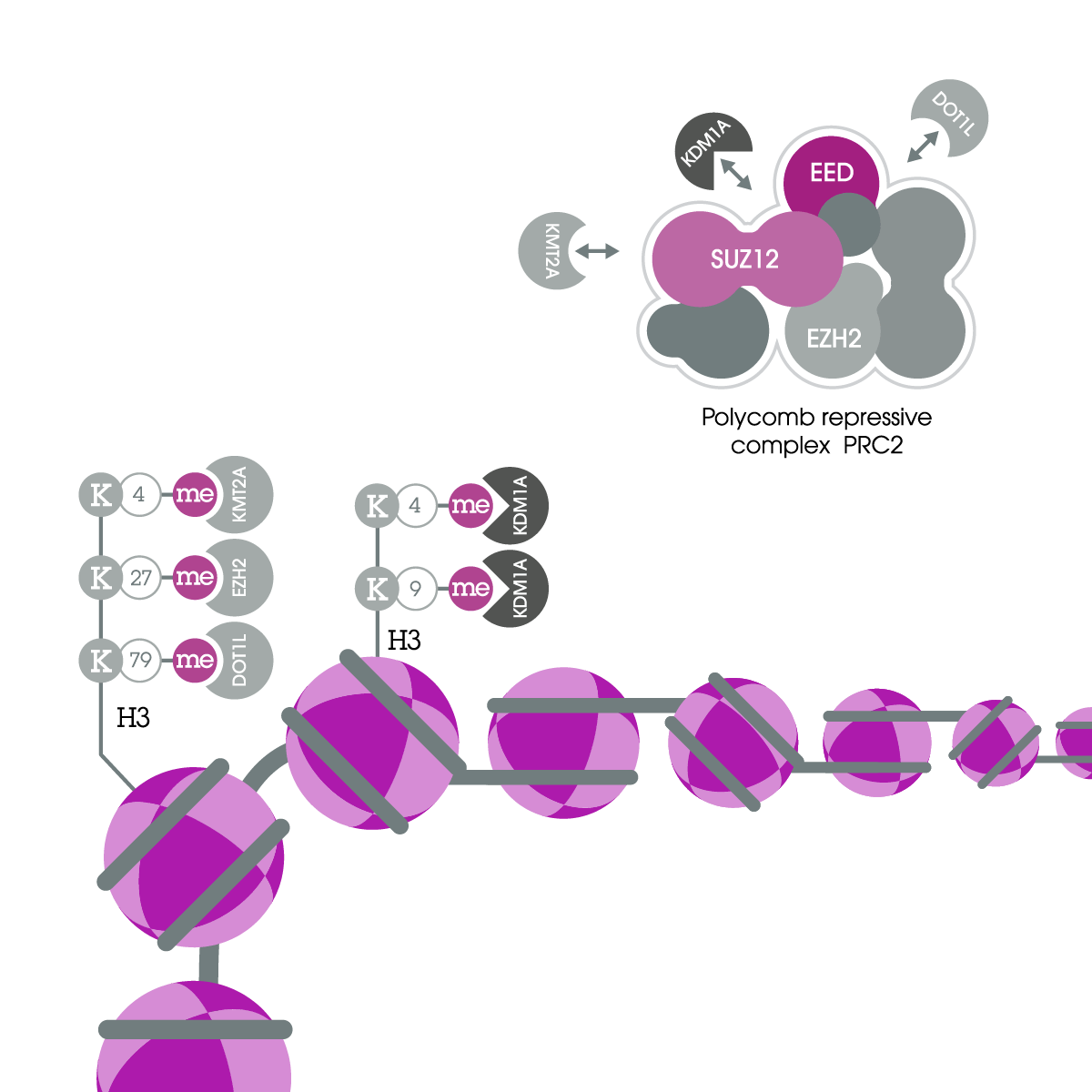 ​PRC2 activity is often misregulated in various human cancers and thereby became a focus for therapeutic drug development. PRC2 complex contains several proteins, including EZH2, EED, and SUZ12. EZH2 is a PRC2 component that catalyzes di- and trimethylation of H3K27. Extensive evidence has linked EZH2 to cancer development and progression. EZH2 overexpression and gain-of-function and loss-of-function mutations were identified in various cancer types. Furthermore, EZH2 overexpression is correlated with a worse progression of several cancers, including prostate cancer43. The overexpression of EZH2 and its mutations in various cancers motivated the development of small-molecule inhibitors of EZH2, which are currently a hot topic in drug development9. Thus, several EZH2 inhibitors have been developed and are being investigated in clinical trials.

Several other important epigenetic targets are involved in the interactions with PRC2 complex, including histone methyltransferases DOT1L and KMT2A and histone demethylase KDM1A. KDM1A is highly expressed in several cancers and is specifically required for the terminal differentiation of hematopoietic cells44.

DOT1L, H3K79 methyltransferase, is a promising epigenetic target, which plays an important role in mixed lineage leukemia. Furthermore, deletion and somatic mutations of the DOT1L gene are found in several types of solid cancers including melanoma, colorectal cancer, and ovarian cancer45,46.

Lysine methyltransferase 2 (KMT2, also known as MLL) methylates H3K4 to promote genome accessibility and transcription. KMT2 genes are frequently mutated in many human cancers and are associated with some of the most common and deadly solid tumors, such as lung and colon carcinomas47,48,49.

The epigenetic modifications and proteins described in this guide are by far not the only ones involved in cancer. For an in-depth analysis of cancer epigenetics, its pathways, and epigenetic targets, we recommend the following review articles: Dawson and Kouzarides 2012, Nebbioso et al 2018, and Laugesen et al 2016.

If you want to learn more about the key techniques used in epigenetics research, refer to our Epigenetics application guide. Also, you can check out our posters on histone modifications and RNA modifications.

If you are interested in histone mutations in cancer, our article on histone H3 mutants in cancer can help you find the best target for your studies.