This guide outlines the latest advanced ChIP-based techniques, and describes how their application has enabled new understanding of epigenetic mechanisms.

Chromatin immunoprecipitation (ChIP) is the basis for much of modern chromatin analysis technologies. The central principle of ChIP is the use of an antibody targeting a protein or histone modification of interest to pull down DNA regions with which it associates. The adaptability and versatility of ChIP allow it to be applied to diverse research questions. This versatility is twofold: diversity of antibody choice and diversity of technology (qPCR, microarray, sequencing etc.) (Collas, 2010).

Coupling of ChIP to microarray (ChIP-chip) has been pivotal to our understanding of the human genome (Kim et al., 2005). ChIP-seq has been instrumental for the ENCODE project which has mapped much more of the human genome (Landt et al., 2012). Furthermore, innovation of data analysis techniques can allow reanalysis or integration of data sets (Klein et al., 2014). This allows for new and often more reliable information to be uncovered.

Traditional ChIP has acted as a springboard to develop novel adaptations, which often combine ChIP with other techniques to address diverse biological problems. Restriction digestion of cross-linked chromatin allows for ligation of interacting fragments. This can be used to determine the three-dimensional organization of the genome. ChIP can also be combined with epigenetic technologies such as bisulfite conversion to interrogate the interplay between histone modification and DNA methylation.

Find out more about the latest ChIP-based techniques using the links below.

ChIP-loop detects DNA-DNA interactions mediated by a specific protein of interest. This is achieved by adding an immunoprecipitation (IP) step to a relatively standard Chromatin Conformation Capture (3C) protocol:

The result is that predicted DNA-DNA interactions that are mediated by a protein of interest are confirmed.

The primary advantage of ChIP-loop over ChIP or 3C alone is specificity. For one, a reduction in background noise over a simple 3C assay is achieved by removing a large amount of genomic DNA by IP. Further, by targeting analysis to a specific protein of interest only specific, biologically relevant interactions are detected.

As a drawback, some argue that ChIP-loop may not be fully informative on its own, and that ChIP-loop should be cross-referenced against ChIP data. For example, if ChIP-loop interacting DNAs are not both enriched in a ChIP experiment, then the interaction should not be considered valid (Simonis et al., 2007).

ChIP and 3C were first combined in 2005 to study a mouse model of Rhett Syndrome (Horike et al., 2005). These researchers found that formation of a silent-chromatin loop is important for the function of the Dlx50Dlx6 locus. Further, they found that this loop was mediated by MECP2 and that this interaction is lost in individuals with Rhett Syndrome.

ChIP-loop is ideally suited to examine DNA loops mediated by transcription factor is a master regulator of chromatin-loop structure at the Kcnq5 locus.

Minimize ligation bias by having sufficient starting material. By performing the ligation when the DNA is concentrated in a small volume, undesirable cross-ligation can occur between chromatin fragments.

Validate with ChIP alone if possible. As stated above, cross-referencing ChIP-loop with ChIP data greatly reduces false-positives in the ChIP-loop assay.

Chromatin Interaction Analysis by Paired-End Tag sequencing (ChIA-PET) is a hybrid of ChIP and 3C techniques. ChIA-PEET is a high-throughput version of ChIP-loop that is capable of detecting long-range chromatin interactions via a protein of interest across the genome. The first steps in the protocol are very similar to a standard ChIP experiment.

ChIA-PET has many advantages over similar techniques. The use of ChIP reduces the amount of DNA to be sequenced, reducing complexity and increasing the specificity of the sequencing reaction. ChIA-PET works with all the tag-based next generation platforms (Roche 454 pyrosequencing, SOLiD, Helicos etc.). ChIA-PET can be used to interrogate the interactions of any protein, given a suitable antibody.

Like any ChIP technique, ChIA-PET is limited by the specificity of the antibody. It is also limited to known genomes, since the calls must be mapped back to a reference genome. Finally, while ChIA-PET can identify if a protein is present in an interacting complex, it cannot determine if that protein actually mediates the interaction. For example, the protein may bind two other proteins that themselves bind the DNA. 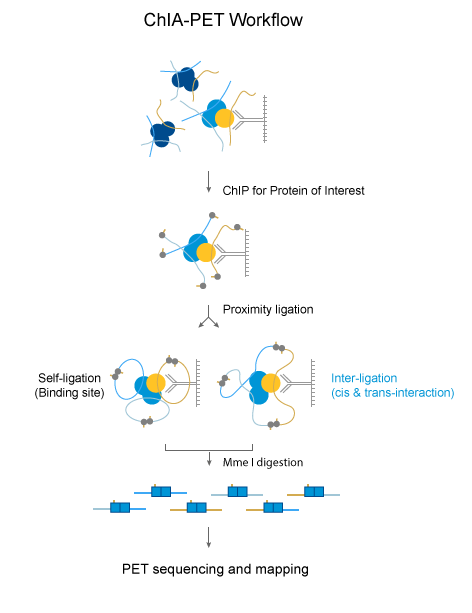 ChIA-PET was introduced in a 2009 paper by (Fullwood et al., 2009). These researchers developed ChIA-PET to map the binding sites of oestrogen receptor alpha (ER-alpha) in human cells. They found that ER-alpha mediates the formation of long-range looping at gene promoters, bringing genes together for coordinated transcription.

ChIA-PET has also been used to characterize the binding dynamics of other transcription factors such as CTCF (Li et al., 2013). Li et al. found that CTCF may have a role in organizing recently identified topological domains of chromatin. Chen et al. (2013) used ChIA-PET to examine miRNA regulation, and found that miRNA expression is coordinated in large chromatin domains.

Sonication or restriction enzyme digest: choose carefully. Sonication gets around the sequence bias and limitations of using a restriction enzyme to shorten protein-cross-linked chromatin. It also improves resolution; however, it is rather harsh, and can cause the loss of long-range interactions.

If long-range interactions are vital to your experiment, consider restriction digest. If sequence bias and resolution are issues, consider sonication.

Analysis is tricky, adapt another ChIP program, or use a previously developed software. The same group that developed ChIA-PET provide the software they used for analysis (Li et al., 2010).

ChIP-exo has many benefits over traditional ChIP. Most obviously, the resolution of ChIP-exo is greater than almost all other ChIP-based techniques. The single-nucleotide resolution achieved is robust across many diverse DNA-binding proteins (Rhee and Pugh, 2011; Rhee and Pugh, 2012a). Most importantly, the high degree of both experimental resolution and scale does not come with the drawbacks of comparable techniques, specifically noise associated with genome-wide approaches. 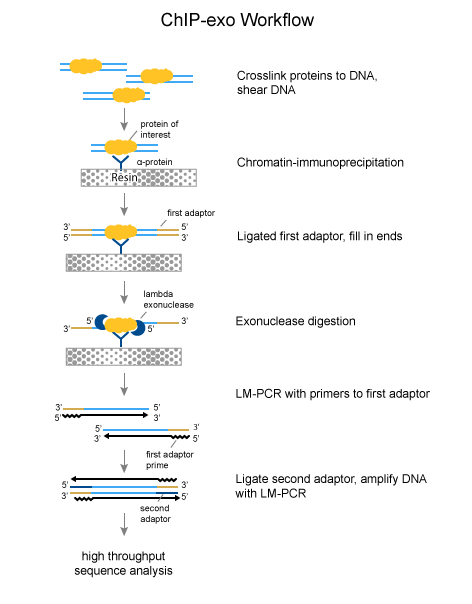 ​​Noise is greatly reduced by the DNA digestion step: all non-protein bound DNA is digested by the lambda exonuclease. An additional single-strand specific exonuclease (such as RecJ) can also be used to digest background DNA more efficiently. The removal of this DNA greatly reduces the noise, and therefore the sequencing depth required, reducing cost.

Another major advantage is sensitivity. ChIP-exo can detect weaker DNA-protein interactions that other techniques, allowing more biologically relevant interactions to be discovered (Rhee and Pugh, 2011).

The only substantial disadvantage of ChIP-exo is related to multiple binding events by a single protein. If a protein binds several DNA loci simultaneously creating a ring or other 3D structure, such structures cannot be detected; any and all multiple-binding events are lost. ChIP-exo will simply read these events are single-bindings. This may be a problem depending on the protein, since the significance of complex ring structures in transcription is becoming apparent (Gibcus and Dekker, 2013).

ChIP-exo was presented in a 2011 Cell paper (Rhee and Pugh, 2011). These researchers examined the binding patterns of the yeast transcription factors Reb1, Gal4, Phd1, Rap1 and human CTCF. They found that each yeast transcription factor had multiple binding patterns and mechanisms. For example, they found that many low-affinity sites had high occupancy. This suggests that sequence alone cannot predict factor binding. This is explained in part by the finding that clustered sites bind more factors than lone sites, suggesting that a combination of effects including high concentrations and direct and indirect cooperation affect transcription factor binding. In a follow-up paper, these researchers also use ChIP-exo to identify TATA-box-like features in promoters that were thought to be TATA-less (Rhee and Pugh, 2012b).

Assess if resolution is paramount before starting. ChIP-exo is superior to ChIP-seq in almost all metrics, but it is labor and cost intensive. If the extra resolution and better signal-to-noise ratios are not vital, consider ChIP-seq for your experiment.

In combination with ChIP, 5mC information can be targeted to regions bearing a specific histone modification or chromatin-binding protein of interest:

It is becoming increasingly clear that co-occurence of epigenetic marks is vital to their function. Various marks act in concert to modulate gene expression, and often co-regulate one another (Ernst et al., 2011). As such, examining two or more epigenetic marks in the same biological samples can give enhanced insight into the research problem. This is the key advantage of ChIP-BS-seq and BisChIP-seq.

Another advantage of these two techniques over traditional bisulfite-seq is the reduction in DNA used for bisulfite sequencing. This means that fewer reads are necessary in sequencing, dramatically reducing costs. However, this does mean that a good deal of input sample is needed, so ChIP-BS-seq/BisChIP-seq is not well suited to low-cell count applications.

An additional drawback of these techniques is that like all antibody-based techniques, the specificity of the experiment is determined by the quality of the antibody.

ChIP-BS-seq and BisChIP-seq were independently developed by two groups and published in the same issue of Genome Research (Brinkman et al., 2012; Statham et al., 2012). Brinkman et al. used ChIP-BS-seq to look at histone H3 lysine 27 trimethylation (H3K27me3) and DNA methylation. They found that H3K27me3 and DNA methylation are mutually exclusive at CpG islands. Statham et al. used BisChIP-seq to examine DNA methylation and H3K27me3 in normal and cancerous prostate cells. Surprisingly, they found that unmethylated and methylated DNA can be associated with H3K27me3 regions. This imples that DNA methylation status is not depended on the presence of the repressive histone mark, a widely held assumption.

Data analysis can be tricky. Since these techniques are relatively new no software has been specifically designed for ChIP-BS-seq/BisChIP-seq data. Statham et al. released the custom pipeline they created available here.