​Chromatin is comprised of histones and DNA: 147 base pairs of DNA wraps around the 8 core histones to form the basic chromatin unit, the nucleosome.

The function of chromatin is to efficiently package DNA into a small volume to fit into the nucleus of a cell and protect the DNA structure and sequence. Packaging DNA into chromatin allows for mitosis and meiosis, prevents chromosome breakage and controls gene expression and DNA replication. Find out more about the structure of chromatin and the methods used to investigate chromatin accessibility and interactions.​

The genome is efficiently packaged into the nucleus. DNA is wrapped around histones to form a nucleosome, comprised of 147 base pairs of DNA and eight-core histone proteins. Nucleosomes are strung together like beads on a string and packaged into higher-order chromatin architecture (Figure 1).

DNA that is tightly bound in nucleosomes or compacted into higher order heterochromatin is inaccessible, preventing the binding of transcription factors, transcriptional machinery, and other DNA binding proteins, resulting in gene silencing. Meanwhile “linker” DNA and open euchromatin architecture are accessible to binding, allowing for active gene transcription.
Chromatin is actively and dynamically remodeled to alter gene expression and cellular programming, for example, during different developmental stages or in response to particular stimuli. Large genomic regions may be silenced or activated, or nucleosomes may be unraveled to access specific genes and DNA sequences.
Examining the chromatin structure and nucleosome positioning reveals epigenetic programs and mechanisms involved in specific cellular processes and disease states.

DNA that is tightly bound in nucleosomes or compacted into higher-order heterochromatin is inaccessible, preventing the binding of transcription factors, transcriptional machinery, and other DNA-binding proteins, resulting in gene silencing. Meanwhile “linker” DNA and open euchromatin architecture are accessible to binding, allowing for active gene transcription.

Chromatin is actively and dynamically remodeled to alter gene expression and cellular programming, for example, during different developmental stages or in response to particular stimuli. Large genomic regions may be silenced or activated, or nucleosomes may be unraveled to access specific genes and DNA sequences.
​
Examining the chromatin structure and nucleosome positioning reveals epigenetic programs and mechanisms involved in specific cellular processes and disease states.
​

Surveying the genome for exposed regions accessible for active transcription vs those bound tightly into heterochromatin can be an essential first step to understanding the relationship between chromatin structure and function in different contexts. To take a snapshot of genomic architecture, researchers may use one of three methods: DNase-seq, MNase-seq, or ATAC-seq.

DNase-seq and ATAC-seq map exposed regions of DNA, whereas MNase-seq maps regions protected by nucleosomes. It is important to keep in mind that these methods provide snapshots of a dynamic process, often averaged across thousands of cells. If a particular region is dynamically changing, or different between cells within the population, the data may seem conflicting between methods. Some single-cell analysis methods are evolving to resolve these challenges.

DNase-seq uses DNase to digest exposed regions of the genome, whereas nucleosome-bound DNA is protected from DNase digestion. The small fragments generated by DNase digestion are then sequenced and mapped to the genome to identify regions of active transcription.

Advantages
• Most established and practiced method
• DNase cutting bias is well-understood
• Can be adapted to inversely examine protected genomic regions, called DNase footprinting, to identify transcription factor and nucleosome binding sites. However, it is important to use naked DNA as a control for such experiments as DNase I cutting bias can lead to false conclusions.
• Possible to adapt for single-cell analysis
Disadvantages
• Technically difficult to master, especially in optimizing digestion conditions for a given cell type/number
• Requires millions of cells, and may be challenging for analysis of rare patient samples
MNase-seq
In contrast to DNase-seq, MNase-seq uses micrococcal nuclease (MNase), from Staphylococcus aureus, to digest exposed genomic regions. Protected DNA bound to nucleosomes is then recovered and sequenced.
Advantages
• Common and well established in many cell types of many species, from yeast to humans, with some standardization of digestion and data analysis.
• Can be used in combinations with chromatin immunoprecipitation (ChIP-seq), to study regulatory factors that bind to nucleosomes
• Can be adapted to generate base-pair resolution mapping
• Can be adapted to examine nucleosome positioning and DNA methylation state in  nucleosome occupancy and methylome sequencing (NOMe-seq)
Disadvantages
• Requires large numbers of cells (10–20 million)
• Sequence-specific bias in the digestion of AT-rich regions (although most enzymes used in chromatin accessibility assays exhibit similar biases), but also unknown biases that may skew results
• Single-cell analysis not possible yet
ATAC-seq
Established in 2013, the assay for transposase-accessible chromatin (ATAC)-seq inserts sequencing adapters directly into accessible DNA using the enzyme Tn5 transposase. The DNA between the adapters is then amplified with qPCR and sequenced.
ATAC-seq uses a mutant hyperactive Tn5 transposase that is preloaded with DNA adaptors to simultaneously fragment and tag the genome with sequence adaptors (a process called tagmentation). PCR amplification and NGS follow this fragmentation and tagging. The frequency of sequences in a region correlates with open chromatin conformation.
Advantages
• Easiest method: no sonication, phenol-chloroform extraction, antibodies (ChIP-seq), or enzymatic digestion (DNase-seq, MNase-seq) are required
• Fastest method: <3 hours compared to up to a 4-day protocol
• Best signal-to-noise ratio
• Only 50,000 or fewer cells required (500–50,000 recommended)
• Single-nucleotide resolution possible
• Single-cell analysis is possible with adapted protocols utilizing flow cytometry/microfluidics
Disadvantages
• More expensive, requires a kit from Illumina (Nextera DNA Library Preparation Kit)
• Least established method and requires optimization of cell number and lysis conditions for specific cell types, tissues, and organisms to achieve ideal fragment distributions
• Cell number defines the quality of the data, with too few cells or too many cells resulting in over- or under-transposition that can skew results

Figure 2: ATAC-seq protocol. Our step-by-step guide to ATAC seq can be found here

We can assess the three-dimensional chromatin architecture with chromatin contact mapping to reveal physical interactions between distant genomic regions. This type of mapping is made possible by the advent of chromatin conformation capture (3C) and subsequent methods developed based on this approach. Each of these approaches has particular strengths for particular applications, but selecting a method for a specific purpose can be challenging due to the sheer variety of methodologies. 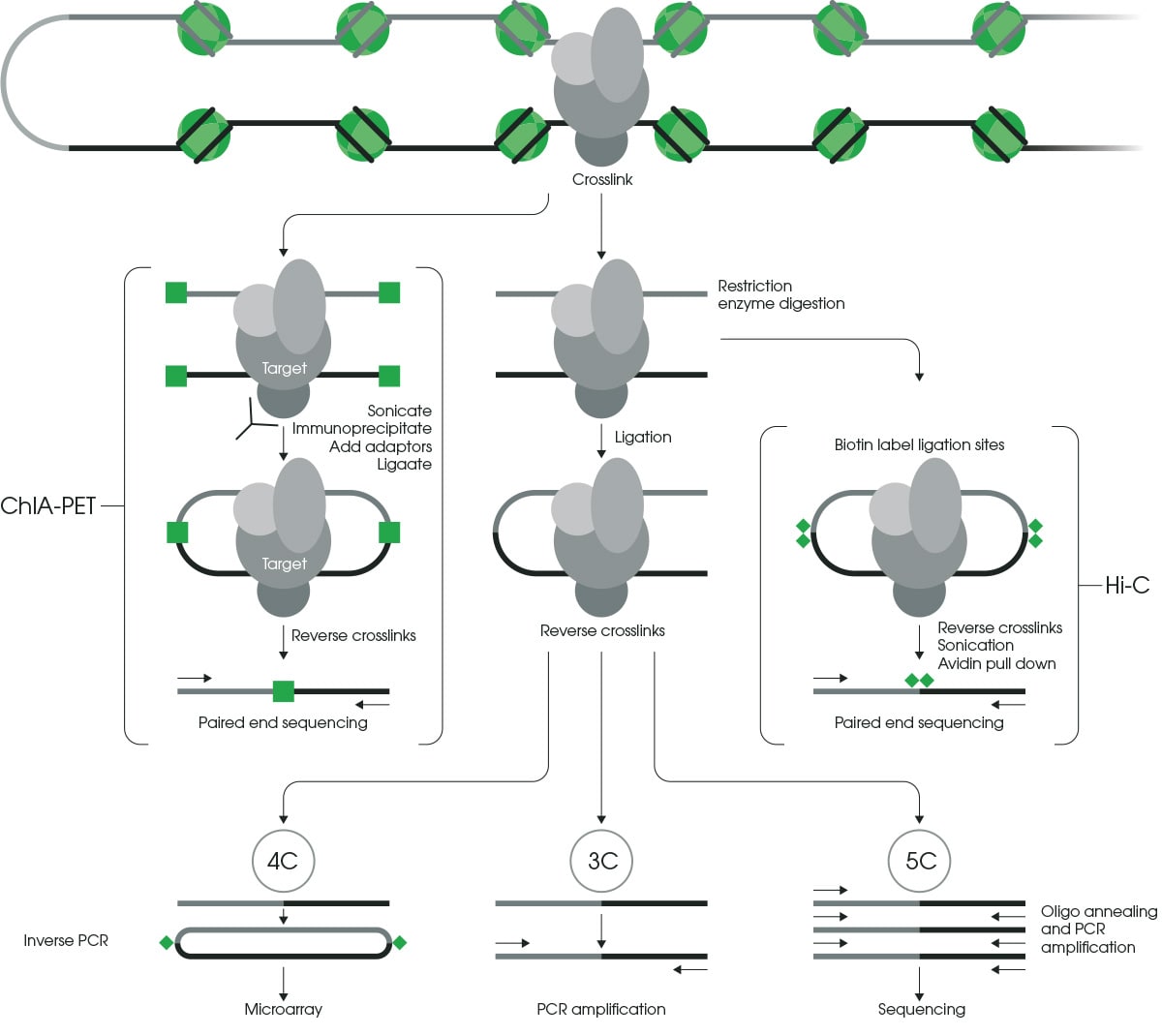 3C uses formaldehyde cross-linking to lock the three-dimensional chromatin structure in place, followed by restriction enzyme digestion. Excised DNA fragments are then analyzed by qPCR and sequencing to identify where distant DNA regions are connected. This approach for analyzing 3D chromatin structure and interactions in vivo was first developed in 2002 (Dekker et al., 2002), and has since become the foundation for a host of related techniques that have been developed to achieve greater scale, throughput, or specificity.​​​

​4C enables identification of previously unknown DNA regions that interact with a locus of interest, which makes 4C ideal for discovering novel interactions within a specific region (Dekker et al., 2006).​​

5C generates a library of any ligation products from DNA regions that associate with the target loci, which are then analyzed by NGS. 5C is ideal when great detail about all the interactions in a given region is needed, for example when diagramming a detailed interaction matrix of a particular chromosome. However, 5C is not truly genome-wide, since each 5C primer must be designed individually, so it is best suited to a specific regions (Dotsie and Dekker, 2007).

ChIA-PET takes aspects of ChIP and 3C to analyze the interplay of distant DNA regions through a particular protein.

ChIA-PET is best used for discovery experiments involving a protein of interest and unknown DNA binding targets. Transcription factor binding sites, for example, are best studied with ChIA-PET since this technique requires the DNA to be bound by the transcription factor in vivo for the interaction to be called (Fullwood et al., 2009).

Hi-C amplifies ligation products from the entire genome and assesses their frequencies by high-throughput sequencing. Hi-C is a great choice when broad coverage of the entire genome is required, and the resolution is not of great concern, mapping the genome-wide changes in chromosome structure in tumor cells (Lieberman-Aiden et al., 2009), for example.

Capture-C uses a combination of 3C and oligonucleotide capture technology (OCT), together with high-throughput sequencing to study hundreds of loci at once. Capture-C is ideal when both high resolution and genomic-wide scale are required. For example, analyzing the functional effect of every disease-associated SNP in the genome on local chromatin structure (Hughes et al., 2014).