​​Advance your research on histone mutations in cancer with our recombinant monoclonal RabMAbs antibodies and find the best target for your studies.

The role of histone mutations in cancer​

​​​​​​Besides chromatin-associated or regulatory proteins, histone proteins themselves can be mutated in cancers. Recurrent histone mutations have been recently described in various cancer types, including brain tumors, chondroblastoma, giant cell tumors of bone, and leukemia. Histone mutations are often heterozygous and frequently comprise single amino acid substitutions in the tails of histone variants. They are also somatic single-gene mutations that arise at high frequencies in particular diseases.

The somatic mutations are frequently found in histone 3 (H3), with substitutions of methionine to lysine on H3.3K27 and H3.3K36 being the most common alterations. Here we review key five histone mutations affecting H3 - H3K27M, H3K36M, H3G34 (W/V/R) - and their role in cancer.

Although H3K27M mutations (Figure 1) are mainly associated with pediatric brain tumors, such as pediatric high-grade glioma (pHGG) and diffuse intrinsic pontine glioma (DIPG), they have also been identified in adult cancers, including acute myeloid leukemia, melanoma, and glioma1. H3K27M mutations have been shown to suppress the methyltransferase activity of the PRC2 complex, leading to a global reduction of H3K27 di- and trimethylation levels (H3K27me2 and H3K27me3)2. The H3.3K27M mutations are associated with the loss-of-function mutation in p53 and the amplification or gain-of-function mutations in PDGFRA (platelet-derived growth factor receptor), FGFR1 (fibroblast growth factor receptor), and other receptor tyrosine kinases3.

H3K36M (Figure 1) is the only recurrent mutation present in the vast majority of chondroblastomas and may act as an oncogenic driver in these tumors. Similar to H3K27M, the H3K36M mutation suppresses the methyltransferase activity of SETD2 and NSD family proteins and leads to the global reduction of H3K36 di- and trimethylation levels. Genome-wide ChIP-seq analyses suggest that K36M is a driver mutation that alters the epigenetic landscape and promotes neoplastic transformation in the chondrocyte lineage3.

Histone mutations at H3G34 include substitutions of glycine 34 with tryptophan (G34W), arginine (G34R), or valine (G34V) (Figure 1). While H3G34W mutations are present at high frequency (>90%) in giant cell tumor of bone (GCTB), H3G34R/V mutations are predominantly found in high-grade gliomas of children and adolescents. In gliomas, H3.3G34R/V mutations are associated with loss-of-function mutations in the tumor suppressor gene p53 and ATP-dependent helicase ATRX, as well as with the deregulated expression of N-Myc protein4. In GCTB, H3.3G34W expression was shown to promote cellular proliferation in-vitro through inducing transcriptional deregulation and splicing alterations5. Furthermore, several studies indicate that replacement of H3G34 with any other amino acid residue blocks SETD2 binding and thereby may hinder methylation of H3K361. 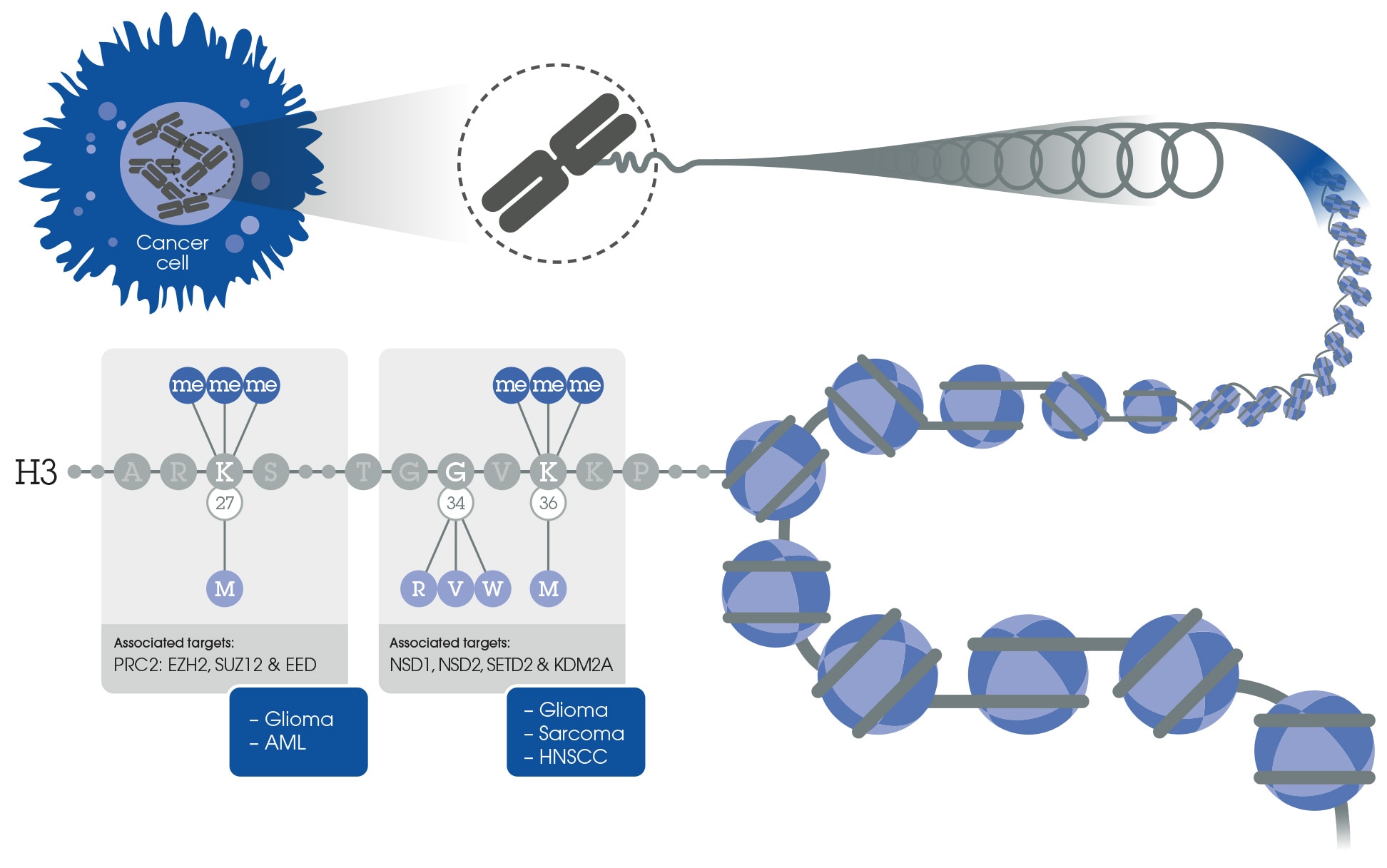 Current research suggests that histone mutations alter the epigenetic landscape, but underlying mechanisms are not completely understood. The identification of widespread recurrent driver mutations in histones has raised significant interest in the development of novel targeted epigenetic therapies for histone mutant tumors, as well as biomarkers for diagnostics and monitoring of drug response.

Tools to study your target​

We have developed recombinant monoclonal RabMAbs to the key histone H3 mutants to help you advance the field of histone mutants in cancer epigenetics.