m6A writers, erasers and readers and their functions in RNA metabolism

Explore the roles of m6A and its writers, erasers, and readers in RNA metabolism and find reliable antibodies to study these targets.

N6-methyladenosine (m6A) is a highly prevalent RNA modification in mRNA and non-coding RNAs that affects RNA splicing, translation, and stability, as well as the epigenetic effects of certain non-coding RNAs1.

Recent advances in sequencing technology have resulted in sensitive techniques that can be used to map m6A to the transcriptome of various model systems and cell types. Knowing the transcriptome-wide location of m6A has given a clearer indication of this marks many functions. We now have a much greater understanding of the biological and regulatory roles being played by this epigenetic mark, although it is also clear that there is still much left to uncover. The same advances in sequencing methods and technology have also allowed us to determine the readers (m6A-binding proteins), writers (methyltransferases), and erasers (demethylases) responsible for m6A's functions, methylation, and demethylation.

Here, we cover the essential m6A writers and erasers as well as some of the crucial readers of m6A and the epigenetic functions they serve.

m6A is dynamically regulated within the nucleus by a methyltransferase writer complex, which deposits m6A on mRNA, and m6A demethylases, which will remove the mark.

The writer complex is known to contain the methyltransferases METTL32,3 and METTL14, the METTL3  adapter WTAP4, and other associated proteins including KIAA14295, RBM15/15B6, and ZC3H137. In the METTL3-METTL14 methyltransferase domain complex, METTL3 acts as the catalytic subunit, while METTL14 offers an RNA-binding scaffold, activating and enhancing the catalytic activity of METTL37. WTAP exhibits no catalytic activity but interacts with METTL3 and METTL14 to modulate the m6A levels of RNA transcripts7.

Both METTL3 and METTL14 play essential roles in diverse biological processes including embryonic development and neurogenesis. METTL3 has been also shown to regulate cell reprogramming, spermatogenesis, T cell homeostasis, and endothelial-to-hematopoietic transition. METTL14 has been reported to act as a tumor suppressor in glioblastoma and play an oncogenic role in the development and maintenance of acute myeloid leukemia.

​The removal of m6A is known to be carried out by two different enzymes: FTO and ALKBH58,9. However, FTO has been found to preferentially demethylate m6Am, an m6A-related, highly abundant nucleotide in mRNA10. This finding suggests that ALKBH5 may serve as the major m6A demethylase.

​The idea that m6A can be added to mRNA and subsequently removed will be an important consideration for future m6A research. Dynamic changes in m6A levels across the transcriptome may point to new functions for this epigenetic mark.

Achieve highly reproducible results in your epigenetic research with our recombinant monoclonal antibodies for key m6A writers and erasers. All of these antibodies are knockout validated to ensure their specificity.

m6A exerts its effects on RNA by recruiting m6A-binding proteins called readers. Knowledge of m6A readers and their functions is rapidly increasing. More and more studies are revealing new m6A readers with specific roles for m6A in different cell types and model systems.

m6A-binding proteins will commonly contain a YTH (YT521-B homology) domain. RNA pulldown has shown that proteins containing a YTH domain are commonly m6A binders11. These different YTH domain proteins have since been shown to have a broad spectrum of roles associated with their ability to bind m6A. YTHDF1, working together with YTHDF3, is known to promote the translation efficiency of its target RNAs7,12. YTHDF2 is thought to play a role in mRNA stability13.  YTHDC1 is implicated in m6A-mediated alternative splicing14. YTHDC2 has been shown to enhance the translation efficiency of its targets while decreasing target abundance15.

Not all m6A readers are YTH containing; they also include eukaryotic initiation factor 3 (eIF3), heterogeneous nuclear ribonucleoproteins (HNRNPs), and insulin-like growth factor 2 mRNA-binding proteins (IGF2BPs). eIF3 plays a role in translation preinitiation and has also been confirmed to bind preferentially to m6A within the 5'UTR of mRNA leading to enhanced translation16.  Two HNRNP proteins, HNRNPC and HNRNPG, regulate the processing of m6A-containing RNA transcripts, harboring m6A as a structural switch to make those transcripts more accessible for binding7. IGF2BPs have been reported to promote the stability and storage of their target mRNAs in an m6A-dependent manner17. 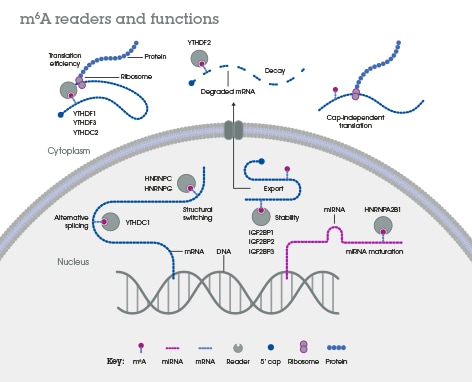 To help your study of m6A functions, we have compiled a list of our best-selling recombinant monoclonal antibodies for m6A readers.

Various methods have been developed to map m6A throughout the transcriptome effectively. Initial studies have used immunoprecipitation methods with highly specific m6A antibodies followed by next-generation sequencing19. These methods are known as MeRIP-seq. MeRIP has since advanced, and it is now possible to carry out single-nucleotide resolution m6A mapping. This can be achieved using very small fragments of RNA (100–200 nts) in combination with immunoprecipitation. This method is known as miCLIP (m6A individual-nucleotide-resolution-crosslinking and immunoprecipitation), and it was first described in Linder et al. 2015 using the Abcam m6A antibody ab15123020. miCLIP has since been used to map m6A in many different cell types and organisms revealing new potential functions for m6A.

If you want to learn more about key techniques used to study RNA modifications, refer to our RNA modifications guide. If you are interested in the miCLIP method, check out our miCLIP protocol.