An introduction to the mechanisms of apoptotic cell death and apoptosis assays and markers.

​​​​Apoptosis is a form of programmed cell death that has important roles in development, aging, and disease. Apoptosis is initiated by a tightly regulated signaling cascade that results in caspase activation. Several features characterize apoptosis, including cell shrinkage, membrane blebbing, chromosome condensation, nuclear fragmentation, DNA laddering, and the eventual engulfment of the cell by phagosomes.

During apoptosis, the caspases (cysteine-aspartate proteases) accelerate cell death through the proteolysis of over 400 proteins. Caspases are activated through the intrinsic and extrinsic cell death pathways.

Activation of the extrinsic cell death pathway occurs following the binding on the cell surface of “death receptors” to their corresponding ligands such as Fas, TNFR1, or TRAIL. These death receptors recruit adaptor molecules such as FADD and caspase 8, which then activate caspase 3 and caspase 7, leading to apoptosis.

Learn more about the mechanisms of apoptosis and other forms of cell death in our three comprehensive guides to apoptosis, necroptosis, and autophagy.

Apoptosis occurs via a complex signaling cascade. The image below shows the main parameters of apoptosis and the approximate relative time when markers for those events are likely to be detected. 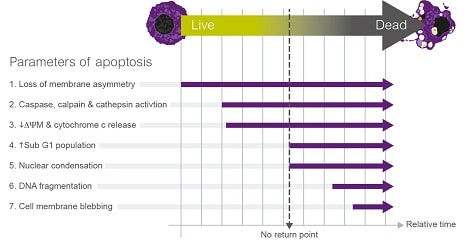 ​​These parameters do not happen in sequential order, and many of them will overlap and occur at the same time.

As cell death can occur by several different paths, including apoptosis, necrosis, autophagy, and necroptosis, some of which share characteristics, you need to examine multiple apoptosis markers to confirm that this is the mechanism of cell death in your experimental system.

The table below shows the main apoptosis markers and the most common methods to study them.

There are a number of methods for running an apoptosis assay to measure these markers of apoptosis.

Other assay methods are used to assay necrosis, anoikis and autophagy.

To further investigate the up and downstream signaling pathways relevant to apoptosis we offer a panel of CRISPR engineered KO cell lines. These panels include a collection of six knockout cell lines of genes involved in the apoptotic cell death pathway, all provided in one kit for your convenience, with matching parental cell lines as controls.

Annexin V binds to phosphatidylserine, which migrates to the outer plasma membrane in apoptosis. The analysis is typically done by flow cytometry. Pair Annexin V with a membrane-impermeable dye like 7-AAD to distinguish between intact, apoptotic, and necrotic cells (eg see ab214663, ab214484, or ab214485).

DNA fragmentation can be measured using agarose gels. In the TUNEL assay (view the TUNEL staining / TUNEL Assay guide), the 3’ ends of DNA fragments are labeled with deoxyuridine either conjugated to a fluorescent dye or biotin.

Caspase activity assays either use peptide substrates, which are cleaved by caspases in cell extracts, or similar substrates that bind to activated caspases in live cells. Caspase specificity varies by substrate.

The glutathione assay is also used for the analysis of apoptosis.