​Definition of the terms commonly used when running or developing an ELISA.

Accuracy
The closeness of mean test results to the true concentration of the analyte.

Affinity
Antibody affinity is typically represented by the equilibrium dissociation constant (Kd), a ratio of Koff/Kon between the antibody and its antigen, where lower Kd value suggests higher affinity relationship.

Assay precision: intra-assay and inter-assay coefficient of variability (CV)
Repeatability between samples ran on multiple assay plates (inter-assay CV) or the measure of each sample in duplicate for each analyte (intra-assay CV).

The inter-assay CV is an expression of plate-to-plate consistency that is calculated from the mean values for the high and low controls on each plate.
The intra-assay CV reported in these studies is an average value calculated from the individual CVs for all of the duplicates, even if the total number of samples requires the use of multiple assay plates.

Batch-to-batch (lot-to-lot) variability
The change in antibody or conjugate lots can dramatically affect assay performance
The calibration of the capture antibodies and the detector antibodies ensure consistent results over time. Polyclonal antibodies can be difficult to calibrate. When available and suitable for the assay development, recombinant monoclonal antibodies are favored and provide greater lot-to-lot consistency.

​Figure 1: Comparison of the signal / noise between to lots when using a mouse monoclonal antibody versus a rabbit polyclonal antibody as detector antibody. NIBSC standard protein: External reference “international standard” protein; retained in liquid form aliquots at -80ºC. Used by Abcam's R&D development teams to provide conversion factor in the product manual that relates the kit standard protein to the NIBSC standard. Not used for the adjustment of the kit standard protein; not provided with the kit to the customer. (click on the image to enlarge)

Calibrator
​The protein standard used to interpolate concentration of target protein in the sample. The best protein standard will mimic the natural protein in a biological sample. Calibration to an international control (NIBSC, WHO, ARUP) will enable cross-comparison between data sets.

Cross-reactivity
The extent to which an antibody pair reacts against non-target proteins. Generally acceptable results are less than 5% cross-reactivity. Testing is typically completed for protein families of high homology or if antibody pairs are required for use in a multiplex assay platform. 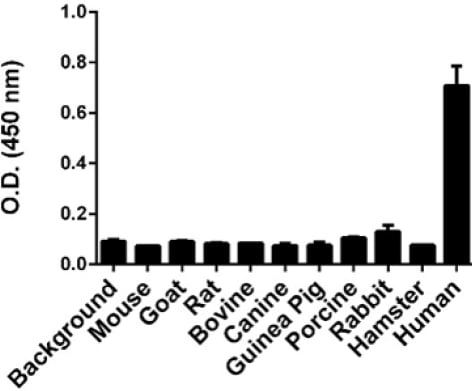 Dynamic range
​The upper and lower concentrations of the target protein that the assay can accurately quantify. The dynamic range extends from the lowest point of a standard curve to the highest point.

For targets that are abundant in a biological sample, the sample should be diluted so that the raw signal for the sample falls within the dynamic range of the assay.

Heterophilic interference
Heterophilic antibodies in human samples are anti-animal antibodies (HAAA) that arise through exposure to animal antigens, such as those that might be encountered by laboratory workers or in people living in close proximity to mice or other animals. In particular, human anti-mouse antibodies (HAMA) commonly result in false positive signals by complexing with both capture and detection antibodies, and generating a signal whether or not analyte is present.  Estimates of the frequency of human samples with heterophilic antibodies at concentrations high enough to interfere with an immunoassay range is up to 5%.

Interference
Unintended specific interactions between biological sample and assay components that affect the accuracy of the assay. Interference is tested for by spiking a sample with a known concentration of target protein and additional inhibitory protein, and measuring target protein recovery. Generally acceptable results should be less than 5% interference as determined by raw signals. 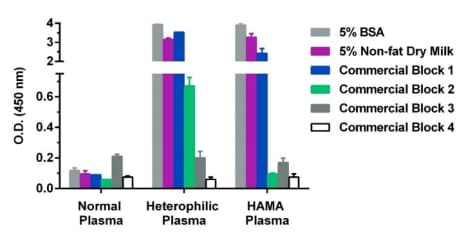 International units
International units (IU) are assigned to reference materials to allow the assessment of ‘biologicals’ in a consistent internationally-agreed manner when the physico-chemical determintation of the standard units (e.g. mass) is not possible.

Linearity of dilution
A measure of parallelism between the dilution of the standard protein and native signal. If both the standard protein and native signal dilute proportionally, interpolated sample values will have an identical value at all doses tested once corrected for dilution. Linearity of dilution experiments are used to determine what concentrations of a given biological matrix are compatible with the assay and define the linear range of the assay for that biological sample.
​
Linearity of dilution is determined by measuring multiple dilutions of known positive samples by ELISA. The concentration of the target protein is determined by multiplying the dilution factor by the calculated concentration. 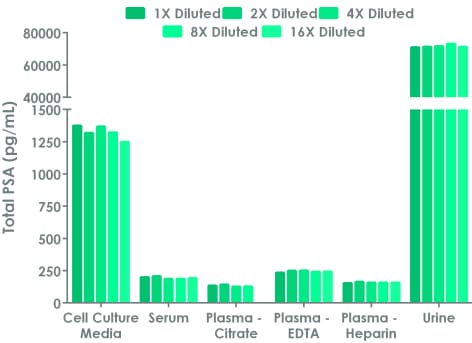 ​Figure 4.  ​​​Linearity of dilution for Human PSA SimpleStep ELISA kit in quantifying human PSA in cell culture, serum, plasma and urine. Diluted samples were measured in duplicate and the calculated concentrations were multiplied by the dilution factor to determine the final concentration.​​

Lower limit of quantification (LLOQ)
The lowest protein concentration that can be detected and reliably quantified based on a specific degree of confidence. To determine the LLOQ, ten times the standard deviation of a series of blanks is added to mean of the blanks; this sum is then interpolated on the standard curve and should be less than 15% CV.  Together with the ULOQ, they define the range of quantification of the assay.

Matrix effects
The combined effect of all components in the sample, other than the analyte, on the measurement of the specific analyte. The matrix effect often results in a reduction in assay performance. If a specific component can be identified as causing an effect, then this is referred to as interference.
​
Examples of matrix effects
- Matrix proteins that non-specifically bind to the CDR regions
- Mineral or pH imbalance that alters antibody affinity to target protein
- Direct interference by cellular components, eg growth factor and receptor

Minimal detectable dose (MDD) or detection limit / sensitivity
The lowest signal that can be statistically distinguished from the background measurement. To determine the MDD, two times the standard deviation of a series of blanks is added to mean of the blanks; this sum is then interpolated on the standard curve.
​
The MDD is a measure of the variability in the blank measurements and as such is best calculated when the number of blanks used for the calculation is high (eg >16 wells for ELISA). The MDD should always be less than the lowest point of the standard curve.

Figure 5. The minimal detectable dose (MDD) is determined by 2 standard deviations over the background.

Specificity
Indication of an antibody binding to a unique epitope of a particular protein and species.
​Antagonist: Cross-reactivity 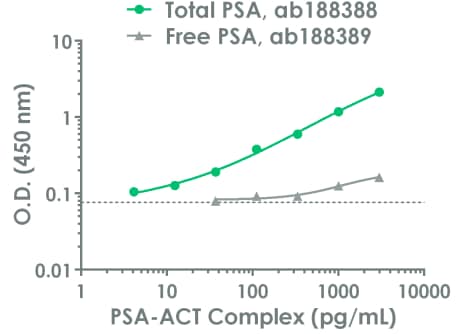 ​Spike and recovery
​A test to determine if a target protein is recoverable after being spiked into a biological matrix. It identifies unknown factor(s) within the biological matrix that can interact with the target protein in a way that effects antibody binding. If factors affecting the binding are present, more or less apparent signal may be recovered.

Table 1. Three concentrations of total purifies human PSA were spiked in duplicate to the indicated biological matrix to evaluate signal recovery in the working range of the total PSA SimpleStep ELISA kit.
​

The expectation for assays validated in this manner is that if you use the assay with a native signal sufficiently high (e.g. disease patient sample with level in dynamic range of assay) then the assay is suitable for this sample type.

Upper limit of quantification (ULOQ)
The highest protein concentration that can be detected and reliably quantified based on a specific degree of confidence. To determine the ULOQ, ten times the standard deviation of the highest data point on the straight part the standard curve is added to mean; this sum is then interpolated on the standard curve and should be less than 15% CV. Together with the LLOQ, they define the range of quantification of the assay.​​

Validated biological samples
Sample types that have been tested with the product and native signal is measurable.

Back to the top of the page