Chromatin condensation and genomic DNA fragmentation, together with cell membrane blebbing, are considered morphological hallmarks of the terminal stages of apoptosis.

​During apoptosis, chromatin undergoes a phase change from a heterogeneous, genetically active network to an inert, highly condensed form. When stained with DNA-binding nuclear dyes, the compacted chromatin will be brighter than the chromatin from non-apoptotic cells, and the condensed nuclei can be easily identified by fluorescence microscopy (qualitative detection) and/or flow cytometry (quantitative detection).

​​​​Nuclear Condensation Assay Kit (ab139479):  Flow cytometry analysis of untreated staurosporine-treated Jurkat cells.  The raw data shown in panels A and B was used for gating cell populations (rectangles) for analysis.  Panels C and D represent the separation of healthy and apoptotic nuclei based on their characteristic fluorescence.

Condensed chromatin can be fragmented by a specific nuclease called Caspase-Activated DNase (CAD). Activation of CAD by the caspase cascade leads to specific cleavage of the DNA at the internucleosomal linker sites between the nucleosomes, generating fragments of ~ 200 base pairs known as DNA ladders.

​​​​A classical method to detect DNA ladders is to examine fragmented genomic DNA on a agarose gel - view our Apoptosis DNA fragmentation protocol  here. This is a simple, semi-quantitative method that provides a robust answer. Some tips to help you get the best from the experiment are:

​An alternative method for detecting DNA fragmentation involves the identification of nicks (or strand breaks) using a TUNEL assay. The TdT dUTP nick end labeling (TUNEL) technique is based on the ability of erminal deoxynucleotidyl transferase (TdT) to end-label nicks in the DNA caused by CAD. TdT has the ability to label 3' blunt ends of double stranded DNA with deoxyuridine, independently of the template.

An increase in the percentage of cells stalled at G1 is another consequence of DNA fragmentation, and can be readily detected with a flow cytometer. Once cells are permeabilized with, for example, a 70% ethanol solution, the DNA fragments will leak out and create a population of cells with reduced DNA content. When cells are stained with a DNA staining dye such as PI, a DNA profile representing cells in the different stages of the cell cycle (G1, S-phase and G2M) can be observed by flow cytometry. The apoptotic cells are easily identified as the subG1 population seen to the left of the G1 peak. The subG1 fraction will include all the dead cells in the population regardless of the type of cell and therefore this parameter on its own is not a good indicator of apoptosis. 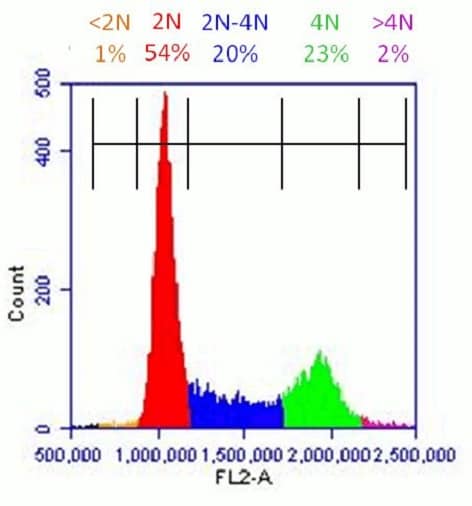 Together with DNA fragmentation, the final execution phase of apoptosis is characterized by dynamic membrane blebbing and cell contraction. During apoptosis, the cell cytoskeleton breaks up, causing some parts of the cell membrane to bulge outwards. The bulges eventually separate from the cell taking a portion of the cytoplasm with them and forming what are known as apoptotic bodies.

Membrane blebbing can be observed in live cells using phase-contrast microscopy. If you are not able to use live cells or would like to use cells that you have prepared for studying other parameters (for example, cells harvested for DNA fragmentation quantification or chromatin condensation), you can detect caspase substrates associated with apoptotic membrane blebbing. Be aware, however, that this is an indirect method and it may give you false positive/negative results.