The rise of miRNA research

In recent years, much attention has been focused on the regulatory activity of a class of RNAs known as microRNAs (miRNAs).

Although there is now widespread interest in miRNAs, this wasn't always the case. Indeed, these short (~22 bp) non-coding RNA sequences were only discovered in 1993 by Victor Ambros and colleagues.

The first miRNA precursor discovered, lin-4, was found to regulate worm (Caenorhabditis elegans) development (Lee et al., 1993). Considered an interesting but worm-specific anomaly, the importance of lin-4’s discovery was not fully appreciated at the time.

It took several years before researchers noticed that miRNAs, and the genes that process them, were highly conserved across species and worthy of more attention. Once the widespread nature of miRNAs was realized, concerted efforts to discover more miRNAs and elucidate their function began.

​miRBase – a dedicated miRNA annotation database – counts 28,645 entries in more than 100 species to date. Furthermore, recent research suggests that there are many more miRNAs waiting to be discovered (Friedländer et al., 2014). 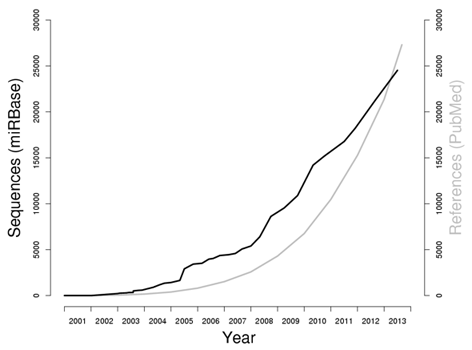 Decades later, we know that humans express >1,900 miRNAs (www.miRBase.org, 2015), that they regulate the translation of mRNA and can silence genes at the DNA level. Unsurprisingly, such fundamental influence on cell activity has implicated miRNAs in a number of diseases including cancer, neurological disorders and cardiac function (Sayed et al., 2011).

Anomalous expression of miRNAs has been shown to be a hallmark of specific cancers and, as these molecules have been shown to circulate in the blood, miRNAs look set to become powerful prognostic and diagnostic biomarkers in the years ahead (Schwarzenbach et al., 2014).

A recent Cancer Cell paper has illustrated what may be a significant broadening of the miRNA field. A multicenter research effort discovered that breast cancer cells shed more exosomes than healthy cells, and that these exosomes are loaded with miRNAs, primed and ready to regulate their target genes (Melo et al., 2014).

This might be just an interesting quirk, after all exosomes are just small membrane bubbles regularly shed by cells; however, the paper’s authors demonstrate that exosomes purified from the sera of cancer patients can instigate tumor formation in healthy epithelial cells.

While one paper doesn’t make a field, a similar exosome-mediated shedding of miRNAs and associated processing machinery has been observed in HIV infected cells (Narayanan et al., 2013) and in cells undergoing anoxic stress (Shen et al., 2013). This is just one of a number of reports highlighting opportunities for the development of miRNA-based biomarkers and therapies for cancer and a number of other human diseases (Sundarbose et al., 2013; Van Roosbroeck et al., 2013); this is certainly a field to keep a close eye on.

Given the emerging role of miRNAs as biomarkers, miRNA profiling has tremendous potential for the diagnosis and prognosis of a broad range of diseases. Using innovative technology, we have developed an assay that enables researchers to detect up to 68 miRNAs of choice either from purified RNA or directly from crude samples including serum, plasma and exosomes.

We have demonstrated how the Multiplex Circulating miRNA Assay can be used for miRNA profiling with PCR sensitivity directly from as little as 10 µL of serum or plasma with no need for RNA purification, or from less than 100 pg of purified RNA. The assay allows the parallel processing of 96 samples, thus enabling the high-throughput analysis required for biomarker validation studies.

Firefly® is a registered trade mark in the Unites States and is registered as a European Union Trade Mark.