​​Explore the genetic complexity of autism spectrum disorder (ASD) and access the tools to further your scientific research in this area.

What is autism spectrum disorder?

ASD is a heritable, heterogeneous neurodevelopmental disorder characterized by impaired social interaction and communication skills as well as repetitive behavior presenting in early childhood1. Children with ASD manifest such distinctive behaviors as reduced eye contact, problems with controlling or understanding emotions, and a restricted range of activities and interests.

ASD is a multi-factorial disorder, which may result from genetic and environmental factors. Genetic causes, including gene defects and chromosomal anomalies, have been found in 10%–20% of individuals with ASD2. The etiology of ASD is confirmed to be multigenic and highly heterogeneous, with very few of the same genetic variants present in a significant percentage of individuals with ASD3.

Explore major pathways implemented in ASD with our interactive poster and find the tools to advance your research in ASD. 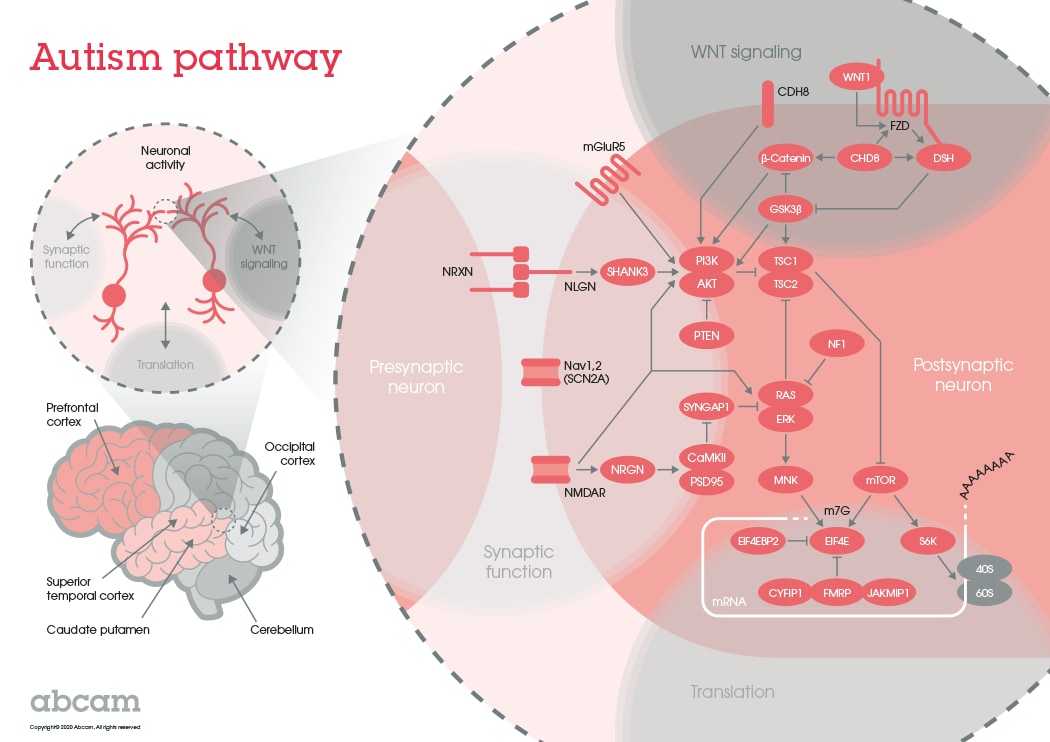 ​Role of biomarkers in ASD

Early identification and treatment of individuals with ASD can improve their outcomes, but there is a lack of specific tools needed to individualize treatment. Routine use of biomarkers could potentially transform clinical care for patients with ASD by identifying clinically meaningful subgroups within highly heterogeneous populations to allow for more precise, individualized medical care8.

Biochemical markers include neurotransmitters, hormones, and markers of immune function and inflammation. For example, studies have reported elevated whole-blood serotonin and decreased plasma melatonin levels in individuals with ASD compared to controls9–11. Furthermore, one study revealed that combined analysis of serotonin, N-acetylserotonin, and melatonin levels could differentiate individuals with autism from controls with 80% sensitivity and 85% specificity11.