Beta-amyloid and tau in Alzheimer's disease

​​Explore beta-amyloid and tau in Alzheimer's disease and access the tools you need to better understand the role they play within this complex condition.

Here you can find an overview of beta-amyloid and tau, including their functions and structures, as well as find the antibodies and kits you need for your Alzheimer's disease research.

​Alzheimer's disease is characterized by the presence of neurotoxic Aβ plaques in the brain. These plaques are formed by monomeric Aβ spontaneously assembling into soluble oligomers, which cluster together to form insoluble fibrils. Evidence suggests a role for both soluble oligomers and insoluble fibrils in Alzheimer’s disease pathology, but their exact contributions are still under debate. Here we cover the generation of Aβ from APP and how structural variation of Aβ may explain the complex pathology of Alzheimer’s disease. 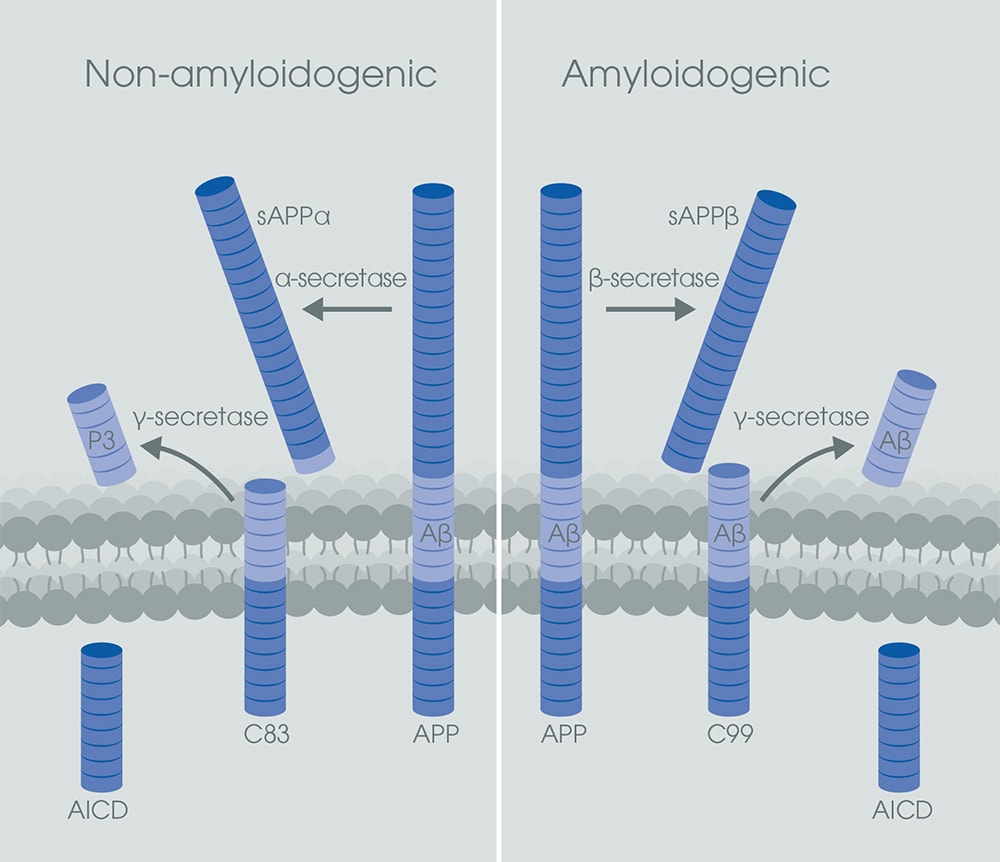 The non-amyloidogenic pathway involves cleavage of APP by α-secretase to generate two fragments: an 83 amino acid C-terminal fragment (C83) that remains in the membrane and an N-terminal ectodomain (sAPPα) that is released into the extracellular medium.

Three enzymes have been identified with α-secretase activity: ADAM9, ADAM10, and ADAM171. Importantly, cleavage of APP by α-secretase occurs within the Aβ domain and consequently prohibits Aβ peptide production.

Of note, the C83 membrane fragment can be subsequently cleaved by γ-secretase to produce a short fragment called P3 peptide and an APP intracellular domain (AICD). To date, the P3 peptide is believed to be pathologically irrelevant2.

The newly exposed C99 N-terminus corresponds to the first amino acid of Aβ. Successive cleavage of this fragment by γ-secretase (between residues 38 and 43) releases the Aβ peptide. γ-secretase is a complex of enzymes consisting of presenilin 1 or 2 (PS1 and PS2), nicastrin, anterior pharynx defective (APH-1) and presenilin enhancer 2 (PEN2) 6–10.

Most of the Aβ peptides are 40 residues in length (Aβ 1–40), with a small percentage containing 42 residues (Aβ 1–42). Aβ 1–42 is considered the more neurotoxic form because the extra two amino acids provide a greater tendency to misfold and subsequently aggregate11. Elevated plasma levels of Aβ 1–42 have been correlated with Alzheimer’s disease12.

Targeting Aβ accumulation by inhibiting its production is important to slow down the progression of Alzheimer’s disease. Blocking APP cleavage is made possible due to access to several β-secretase inhibitors.

One barrier to understanding the role of Aβ in Alzheimer’s disease is the lack of correlation between Aβ in the brain and the cognitive ability of patients. For example, some patients with Aβ deposits show no symptoms of Alzheimer’s disease at all20,21.

The answer to Alzheimer’s disease heterogeneity may lie in structural variations of Aβ, which can form polymorphic Aβ oligomers in a process known as segmental polymorphism. This is where the segments that form beta sheets vary between different fibril structures22–24.

Therefore, like in prion diseases, unique forms of structurally distinct Aβ might be deposited in different places and at different times in the brains of patients with Alzheimer’s disease. However, it remains unclear which types of deposit are more closely linked with the cognitive symptoms of the disease25.

The need for conformation-specific antibodies

With increasing evidence to support the biomedical importance of Aβ structural variation, conformation-specific Aβ imaging reagents will play a central role in the future of Alzheimer’s research.

Research in humans has shown the clinical relevance of Aβ structural variation. Tissue taken from two Alzheimer’s disease patients with distinct clinical histories revealed that each patient had a predominant Aβ fibril structure; however, the dominant structure was different in each patient26.

Studies in mice and cultured cells have also supported the biological relevance of Aβ structural variation. Structurally distinct Aβ fibrils cause varying levels of toxicity in neuronal cultures, while mice given Aβ from different sources develop distinct patterns of Aβ deposition within the brain27,28.

Furthermore, the complexity of Aβ structure is convincingly reflected by the immune system, with research showing that the antibodies produced in response to Aβ fibrils are diverse, reflecting their structural variation25,29.

Considering all evidence, it is becoming increasingly clear that a single antibody will not be enough to study or target all the possible pathological aggregates of Aβ contributing to Alzheimer’s disease. This makes conformation-specific Aβ antibodies an essential tool for the future of Alzheimer’s disease research30–33. A brief introduction to the tau protein and how it contributes to Alzheimer's disease.

Under normal circumstances, tau is a microtubule-associated protein (MAP) involved in microtubule stabilization. However, it is also a multi-functional protein with a critical role in certain neurodegenerative disorders including Alzheimer's disease34.

Tau is primarily found in axons where it regulates microtubule polymerization and stabilization. However, its broad selection of binding partners suggests that it has multiple functions, including postnatal brain maturation, regulation of axonal transport and signaling cascades, cellular response to heat shock, and adult neurogenesis37.​​

Tau can be divided into four regions: an N-terminal region, a proline-rich domain, a microtubule-binding domain (MBD), and a C-terminal region38.  The human tau gene (MAPT) contains 16 exons, and alternative splicing of exons 2, 3, and 10 yields six isoforms (Figure 2). 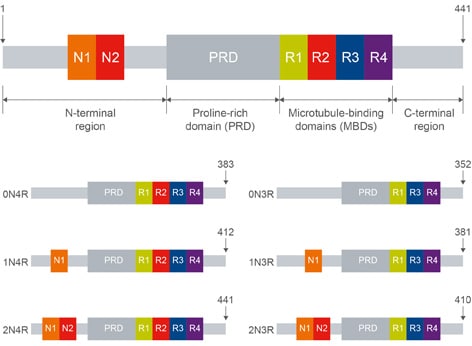 Role of tau in Alzheimer's disease

Accumulation of plaques and intracellular NFTs (Figure 3) is correlated with Alzheimer's disease symptoms and results in neuron damage and death42.  It is now believed that soluble Aβ and tau work in tandem, independently of their accumulation into plaques and tangles, to push neurons towards a diseased state42.​​

Figure 3. Formation of neurofibrillary tangles (NFTs) by the tau protein in tauopathies such as Alzheimer’s disease. Under pathological conditions, tau becomes hyperphosphorylated and detaches from microtubules. Phosphorylated tau then aggregates to form paired helical filaments (PHFs) and NFTs.

In Alzheimer’s disease, the elevation of intracellular soluble Aβ leads to the abnormal phosphorylation of tau and its release from microtubules in a soluble monomeric form39,43.  In response to Aβ, tau is relocated from axons to the somatodendritic compartments of neurons43.  Here, tau can bind and sequester the Src tyrosine kinase, fyn, altering its localization44.

Extracellular vesicles may be involved in the dissemination of pathological Aβ and tau in a prion-like propagation of Alzheimer's disease plagues and NFTs48,49.

Novel therapeutic strategies for the treatment of Alzheimer's disease may include preventing the Aβ-induced, tau-dependent enhancement of NMDA receptor activity, by reducing dendritic levels of fyn18 or targeting tau directly50. ​​​​Antibodies and kits for tau research

Study tau from every angle with a comprehensive array of research tools to get new insights into tau pathology. From aggregation inhibitors to kits and antibodies, find everything you need to untangle tau, in one place.

Tau is found in soluble form in the normal brain but in Alzheimer's disease, becomes aggregated and insoluble. Easily detect total tau with bovine serum albumin (BSA) and azide-free antibody, an antibody panel, or an ELISA kit from the table below.

Note: Studying insoluble tau can be problematic, consider using detergents such as RIPA and Sarkosyl.53

Tau function is governed by phosphorylation, which becomes dysregulated during pathology, resulting in mislocalization, aggregation, and neuronal death. Effortlessly study all aspects of tau phosphorylation with antibodies against different post-translationally modified sites.

The presence of aggregated tau corresponds with pathology in diseases such as Alzheimer’s. Effectively inhibit the formation of neurofibrillary tangles with a potent tau aggregation inhibitor.

There is a complex interplay between misfolded proteins and neuroinflammation in neurodegenerative disease.

Table 7. Tools to study tau in the context of neuroinflammation.