Explore the complex pathogenesis of epilepsy and access the tools you need to support your research.

Epilepsy is a serious chronic neurological condition with complex pathology. It is characterized by recurrent, spontaneous, and unpredictable seizures, which disrupt normal brain function. Epilepsy occurs in all age groups and affects over 50 million people worldwide. ​

Epileptogenesis is an assembly of factors that convert a healthy brain into a brain affected by recurrent seizure activity1. Key factors contributing to epileptogenesis include neurodegeneration2,3, disruption of the blood-brain barrier (BBB)4, and dysfunction of the glutamatergic system5, which is thought to be a result of neuroinflammation. Additionally, oxidative stress6 and hypoxia7 are considered to play a role in inducing epigenetic modification of DNA8. Furthermore, hypoxia may result in the activation of cytokines and the complement system, which contribute to neuroinflammation. The neuroinflammation may, in turn, induce the production of cytokines and the elements of the complement system in a feedback loop. The culmination of all these mechanisms is thought to lead to the development of epilepsy9.

Explore key pathological processes involved in the development of epilepsy with our interactive pathway and find the best products for your target of interest.

What is epilepsy?
Key factors in epileptogenesis: check out our interactive pathway
Role of biomarkers in epilepsy
Recombinant monoclonal antibodies for epilepsy research
References 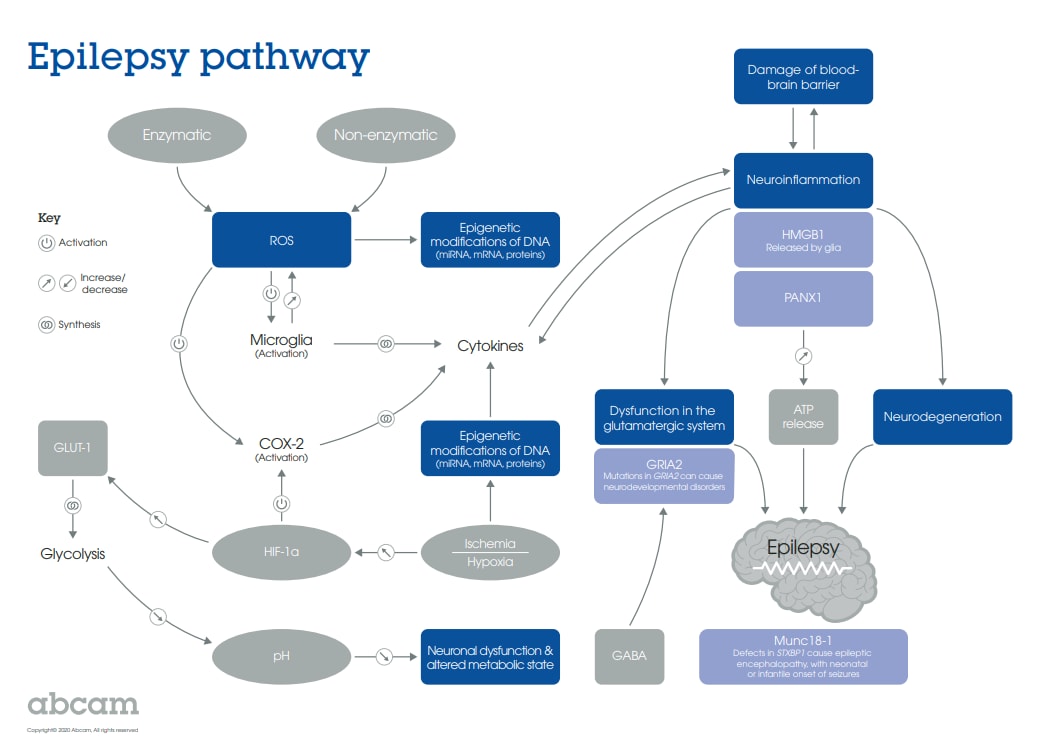 Role of biomarkers in epilepsy

Finding novel biomarkers for post-epileptic brain damage may help to prevent complications and develop targeted methods of treatment in the future. Biomarkers may play a role in individualized epileptic treatment, based on the patients' biomarker profile, and in monitoring anti-epileptic treatment9.

High mobility group box-1 (HMGB1), a DNA-binding protein, has recently emerged as a potential common biomarker of traumatic brain injury, neuroinflammation, epileptogenesis, and cognitive dysfunctions, which can be used for early prediction and progression of those neurological conditions10. HMGB1/TLR4 regulatory axis acts as a key initiator of neuroinflammation and involved in the generation and exacerbation of epileptic seizures11.

Get reproducible, batch-to-batch consistency using recombinant monoclonal antibodies and proteins for your epilepsy research. These are some of our best-selling products.