Stroke: overview and tools for your research

Explore the complex pathology of stroke and access the tools you need to advance your research in stroke and its associated diseases.

The cerebral small-vessel disease is strongly associated with ischemic stroke and dementia. The most prevalent inherited cause of the cerebral small-vessel disease is CADASIL (cerebral autosomal-dominant arteriopathy with subcortical infarcts and leukoencephalopathy), a disorder linked to mutations in NOTCH3. The most common symptoms of CADASIL are small ischemic strokes and/or transient ischemic attacks and cognitive impairment, appearing in middle age, that may progress to VaD4.

Recent studies have found autophagy to be a key regulatory factor in ischemic stroke, unveiling a new range of potential therapeutic targets for neuroprotection5.

Explore the role of autophagy signaling pathways in ischemic stroke with our interactive pathway. 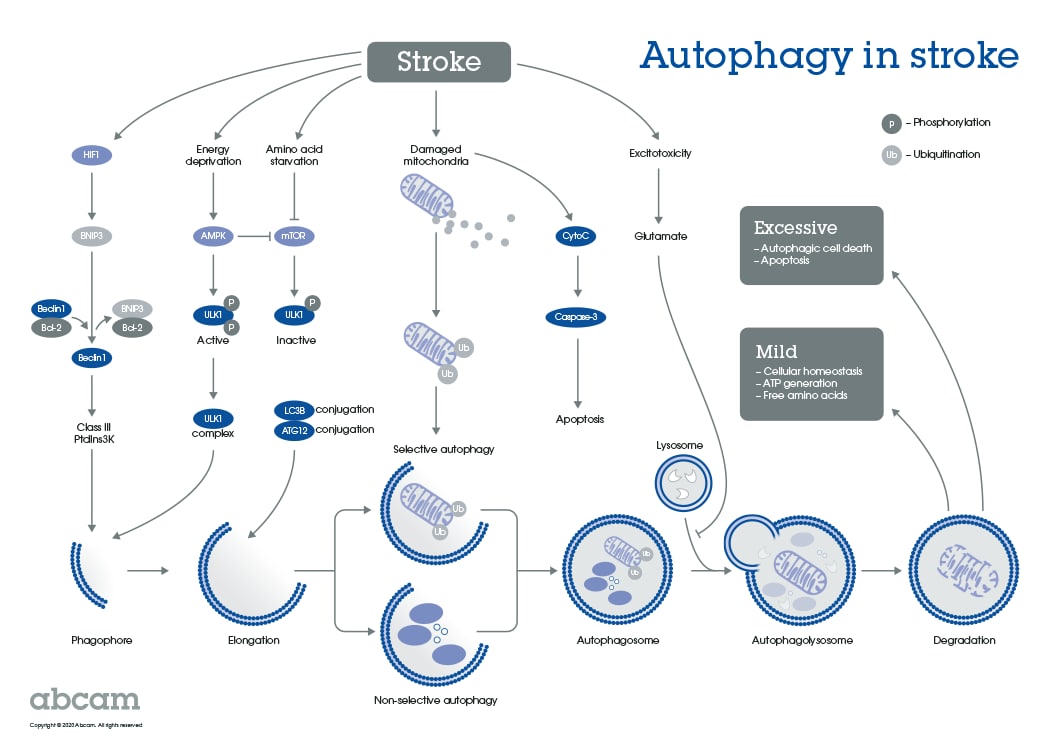 Learn more about the link between stroke, small vessel disease, and vascular dementia from Professor Hugh Markus, Professor of Stroke Medicine at the University of Cambridge.

Here Prof Markus discusses the connection between vascular risk factors and AD and highlights the value of studying CADASIL as a model for pure vascular dementia. He also talks us through recently discovered monogenic forms of small vessel disease such as HTRA1, COL4A1, COL4A2. Key targets in stroke include HTRA1, NOTCH3, COL4A1/2, VEGFA, ACHE, BCHE. Mutations in NOTCH3 and HTRA1 genes are responsible for the development of CADASIL, which causes stroke6. COL4A1 mutations have been identified in adult patients with small-vessel disease and can result in stroke7.

VEGF-A is expressed at low levels in the adult human brain, but it is upregulated in response to stroke, predominantly in the stroke/penumbra area. VEGF-A was shown to promote angiogenesis, neurogenesis, and neuroprotection, leading to improved functional recovery. VEGF-A is, therefore, a potential candidate for treatment in ischemic stroke8.

Learn about the impact of strokes, the challenges in their diagnostics and how PockitDx used Abcam SimpleStep ELISA to develop a diagnostic assay which helps to overcome some of those challenges. Explore prognostic biomarkers in stroke with our SimpleStep ELISA® kits.