See how fatty acids are broken down and used to generate ATP.

Fatty acids provide highly efficient energy storage, delivering more energy per gram than carbohydrates like glucose. In tissues with high energy requirement, such as heart, up to 50–70% of energy, in the form of ATP production, comes from fatty acid (FA) beta-oxidation.

Fatty acids are activated for degradation by conjugation with coenzyme A (CoA) in the cytosol. The long-chain fatty-acyl-CoA is then modified by carnitine palmitoyltransferase 1 (CPT1) to acylcarnitine and transported across the inner mitochondrial membrane by carnitine translocase (CAT). CPT2 then coverts the long chain acylcarnitine back to long-chain acyl-CoA before beta-oxidation.

1) Dehydrogenation catalyzed by acyl-CoA dehydrogenase, which removes two hydrogens between carbons 2 and 3.

2) Hydration catalyzed by enoyl-CoA hydratase, which adds water across the double bond.

4) Thiolytic cleavage catalyzed beta-ketothiolase, which cleaves the terminal acetyl-CoA group and forms a new acyl-CoA which is two carbons shorter than the previous one.

The shortened acyl-CoA then reenters the beta-oxidation pathway. 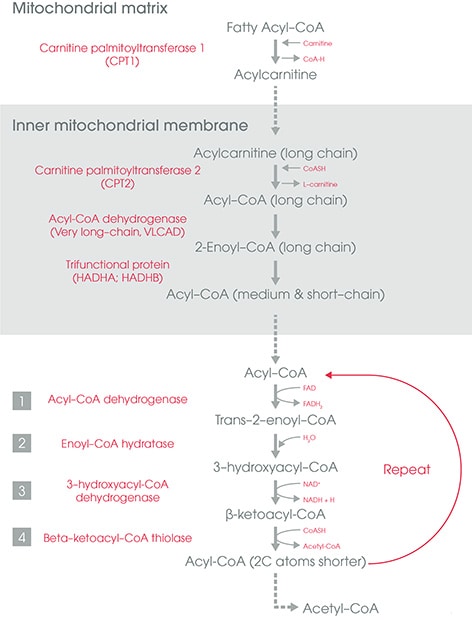 Schematic diagram of fatty acid transport and beta-oxidation in the mitochondria. Click on image to enlarge.

Acetyl-CoA generated by the beta-oxidation pathway enters the mitochondrial TCA cycle, where is further oxidized to generate NADH and FADH2. The NADH and FADH2 produced by both beta oxidation and the TCA cycle are used by the mitochondrial electron transport chain to produce ATP. Complete oxidation of one palmitate molecule (fatty acid containing 16 carbons) generates 129 ATP molecules.

Download a PDF version of the fatty acid beta-oxidation pathway