​​Proteins of the Hedgehog (Hh) family are powerful signaling molecules that act as morphogens during development in both vertebrates and invertebrates.

Hh was first discovered in a genetic screen performed on cuticle embryo, that aimed to understand the body segmentation of Drosophila melanogaster (Nusslein-Volhard and Wieschaus, 1980). In this screen, mutant embryos for Hh developed as prickly little balls similar to a hedgehog (so the name of the protein).

The core components of the Hh pathway were initially identified in Drosophila​ and are conserved in vertebrates, where the pathway has maintained the same mechanisms of action through species (although with some exceptions). Most interesting, deregulation of the Hh pathway leads to developmental defects and cancer.

Hh is first synthesized as a precursor. It undergoes autoproteolytic cleavage where a cholesterol molecule (Porter et al., 1996), and a palmitic acid molecule (Ingham and McMahon, 2001) are added to the final product. The primary role of these modifications is to direct the mature signal to interact with a set of cellular components that are responsible of the Hh secretion, movement and reception. In particular, cholesterol is involved in Hh trafficking and movement (Gallet et al., 2003), whereas palmitoylation in Hh signaling (Chamoun et al., 2001; Liu et al., 2007).

Once Hh is modified, it is ready to be secreted from the cells (Burke et al., 1999). After secretion, Hh interacts with the extracellular matrix and has to find a way to move through it to reach the receiving cells, forming a concentration gradient.

Several models have been proposed to explain how Hh can move far from its source, such as its movement inside a special structures called lipoprotein particles (Bolanos-Garcia and Miguel, 2003; Olofsson et al., 1999) and through its interaction with heparan sulphate proteoglycans (HSPGs) (Jia et al., 2003; Nakato et al., 1995).

At the plasma membrane

Hh signal transduction is initiated at the plasma membrane where Hh interacts with its 12 transmembrane protein receptor Patched (Ptc) (Ingham and McMahon,2001). The interaction between Hh and Ptc is facilitated by the Ihog/Cdo family of coreceptors (Zhang et al., 2010). The binding between Ptc and Hh has two main important roles:

The activation or inhibition of the Hh pathway is regulated by a multi-protein complex (Hh signaling complex, HSC) downstream of Smo. The components of the HSC complex are:

Both Cos-Fu-Ci and Sufu-Ci complexes regulate the status of the transcription factor Ci. Ci is a 155 kDa protein (Ci-FL, full length) that contains a zinc finger domain responsible for its DNA binding (Slusarski et al., 1995). Ci is converted to an ACTIVE FORM (Ci-A, 155 kDa) responsible for target gene activation in the presence of Hh, or to a REPRESSOR FORM (Ci-R, 75 kDa), that still bind DNA but inhibit the pathway in the absence of Hh. 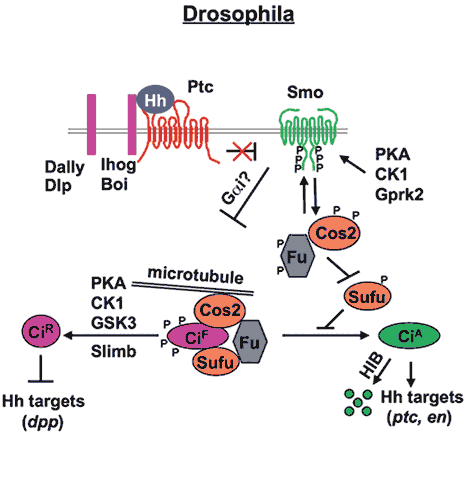 Figure 1. Drosophila Hh signal transduction pathway (Chen and Jiang, 2013). The mature Hh molecule reaches Hh receiving cells by binding with HSPGs, such as Dally and Dally-like (Dlp). In the absense of Hh, Ptc inhibits Smo allowing Ci to be phosphorylated by PKA, CK1 and GSK3. These phosphorylation events target Ci to a partial proteolytic cleavage (mediated by Slimb/β​TRCP) to generate the repressor form (Ci-R). Binding of Hh to its receptor Ptc and co-receptor Ihog releases Ptc inhibition on Smo, which undergoes phosphorylation mainly by PKA and CK1. Consequently, Smo accumulates at the cell surface recruiting the Cos2-Fu-Ci complex. Here, according to the amount of Hh received by the cell, phosphorylation events on Cos2 and Fu regulate the activation of Ci and therefore of the pathway itself.

The main difference between Hh signaling in Drosophila and vertebrates is the requirement for the vertebrate intraflaggular transport (IFT), which consists of large multisubunits complexes that are responsible for the bidirectional transport of proteins between the base and the tip cilia (Huangfu et al., 2003).

Both Ptc and Smo can localize to primary cilia in a mutually exclusive way, where the binding of Shh to Ptc allows Smo to move into the cilium, promoting pathway activation through the Gli transcription factors (Rohatgi et al., 2007).

Main similarities and differences between Drosophila and vertebrate Hh signaling are:

These suggest an evolutionary conservation in the Shh intracellular cascade, though further studies are necessary to better understand the molecular functions of the protein involved. 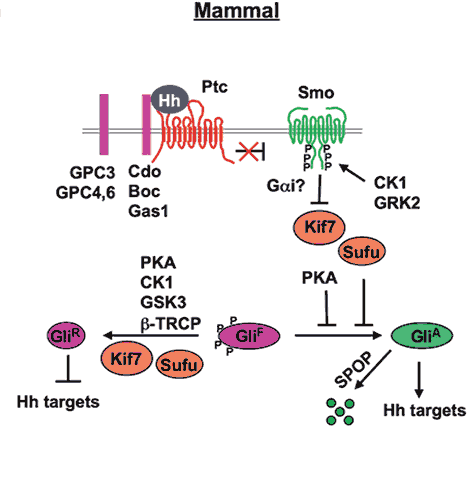 Figure 2. Mammal Hh signal transduction pathway (Chen and Jiang, 2013). The mature Hh molecule reaches Hh receiving cells by binding with HSPGs (such as GPC3, GPC4 and GPC6). In the absence of Hh, Ptc inhibits Smo allowing Gli to be phosphorylated by PKA, CK1 and GSK3. These phosphorylation events target Gli to a partial proteolytic cleavage (mediated by β​-TRCP) to generate the repressor form (Gli-R). In the presence of Hh, binding of Hh to its receptor Ptc and co-receptor Cdo releases Ptc inhibition on Smo, which undergoes phosphorylation by mainly CK1 and GRK2. Consequently, Smo accumulates at the cell surface (within the cilia). Sufu is the major negative regulator of the pathway (kif7 is a minor one). In the presence of Hh, Sufu destabilization and degradation allows the release of its repression on Gli, with consequent pathway activation.