The Hippo signaling pathway regulates a number of biological processes including cellular proliferation, survival, differentiation, cellular fate determination, organ size, and tissue homeostasis. Originally discovered and studied in Drosophila melanogaster, the pathway is highly conserved across species, and equivalent genes and their protein products involved in the Hippo pathway can be found in mammals1.

The pathway consists of a complex cascade of serine/threonine-protein kinases. Serine threonine kinase 3 (STK3) and STK4 (also known as MST1 and MST2) are the mammalian equivalent of the Drosophila Hpo protein1,2. These kinases form a complex with the adaptor protein, salvador homolog 1 (SAV1) to phosphorylate and activate the effector protein, large tumor suppressor 1/2 (LATS1/2). MAP4K and TAOK kinases also act in parallel to phosphorylate LATS1/23. Once activated, LATS1/2 binds MOB kinase activator 1A/B (MOB1A/B) and inhibits the transcription cofactors yes-associated protein (YAP1) and transcriptional co-activator with PDZ-binding motif (TAZ or WWTR1)5. Neurofibromin 2 (NF2), a tumor suppressor protein, also acts to inhibit YAP/TAZ activity by promoting the activation of the pathway4. When the Hippo pathway is ‘off’, the phosphorylated YAP/TAZ is retained in the cytoplasm and may also undergo proteolytic degradation5. When the Hippo pathway is ‘on’, the unphosphorylated YAP/TAZ moves into the nucleus and binds to transcription factors called TEA DNA-binding proteins (TEAD1–4). The YAP/TAZ-TEAD complex regulates proliferative and pro-survival genes1.

Dysregulation of the Hippo pathway, resulting in an increase in YAP/TAZ activity, is associated with cancer, promoting hyperproliferation, cellular invasion, metastasis, and chemoresistance7.

The pathway poster explores the kinase cascade at the core of the mammalian Hippo pathway, including STK3/4 (MST1/2), LATS1/2, YAP, and TAZ. Discover how these proteins interact with other key components such as MAPK kinases and find relevant products to research these targets. 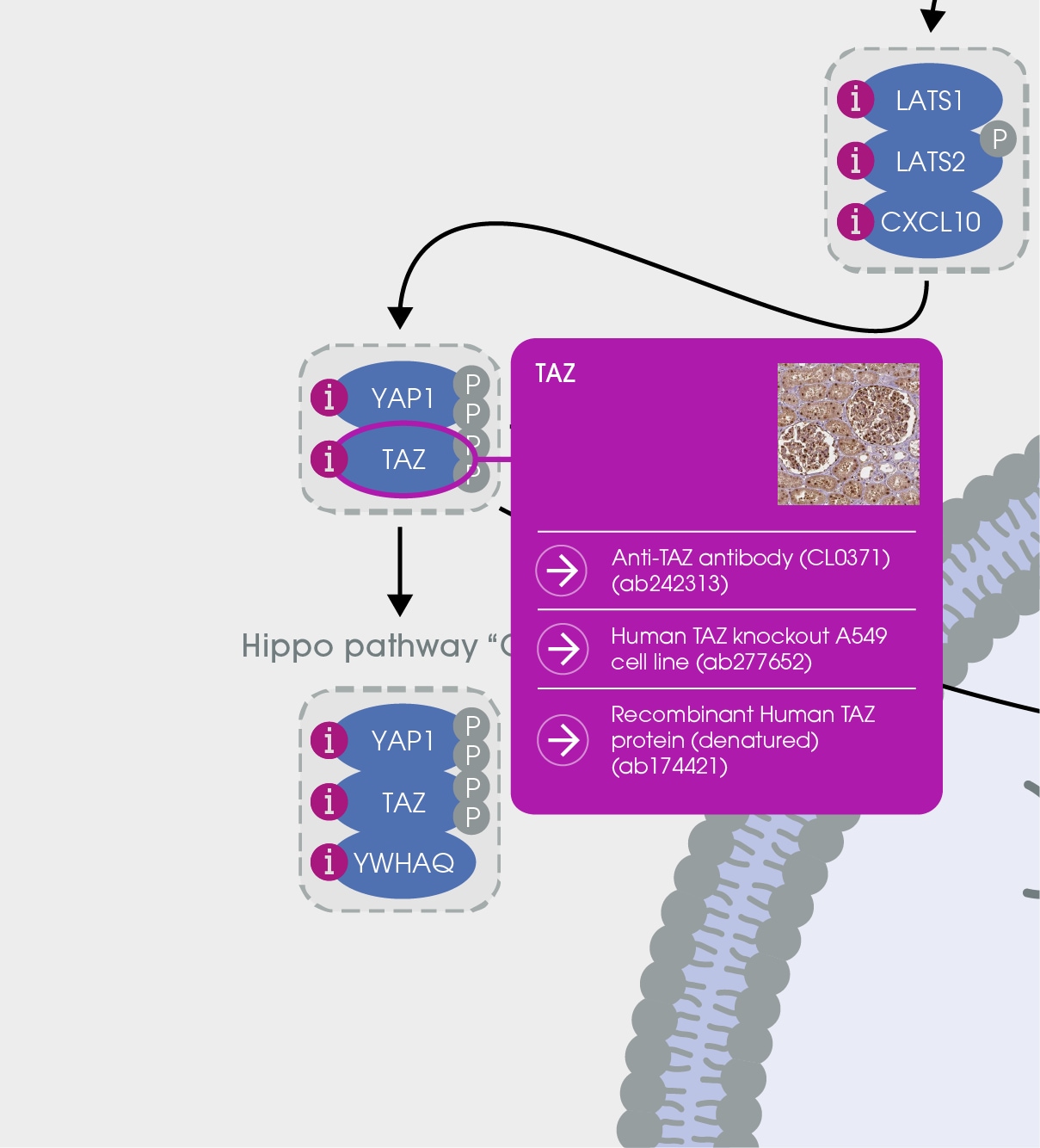