Nitric oxide (NO) is an essential molecule involved in several physiological and pathological processes within the mammalian body. NO is synthesized by nitric oxide synthase (NOS) which oxidizes a guanidine nitrogen of L-arginine releasing nitric oxide in the form of a free radical and citrulline.

Three isoforms of the NOS have been identified: endothelial (eNOS or NOS-3), neuronal (nNOS or NOS-1), and inducible (iNOS or NOS-2) - each with separate functions. The neuronal enzyme (NOS-1) and the endothelial isoform (NOS-3) are calcium-dependent and produce low levels of gas as a cell signaling molecule. The inducible isoform (NOS-2) is calcium independent and produces large amounts of gas which can be cytotoxic.

Nitric oxide thus generated acts as a messenger in diverse functions including vasodilation neurotransmission, anti-tumor and anti-pathogenic activities. Sufficient levels of NO production are necessary in protecting an organ such as the liver from ischemic damage. However, sustained levels of NO production result in direct tissue toxicity and contribute to the vascular collapse associated with septic shock, whereas chronic expression of NO is associated with various carcinomas and inflammatory conditions including juvenile diabetes, multiple sclerosis, arthritis, and ulcerative colitis. 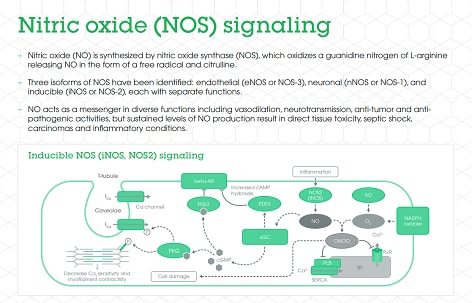