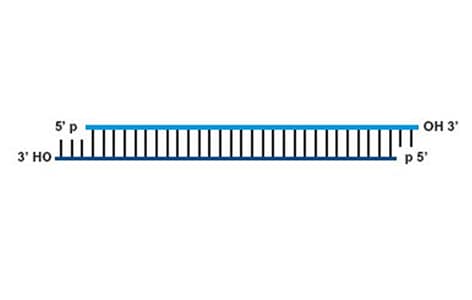 Long dsRNA molecules of exogenous or endogenous origin are cleaved to produce siRNA by the enzyme Dicer (Figure 2).

Members of the Dicer family are multi-domain proteins that comprise RNase III domains, a PAZ domain (named after the proteins PIWI, Argonaute and Zwille), a dsRNA-binding domain, a domain of unknown function in addition to a helicase domain that is presumably involved in unwinding of the double stranded siRNA precursor.

The Argonaute family of proteins, specifically Argonaute 2 (also known as Ago2, eIF2C2 or Slicer) are essential components of RISC, which are involved in mRNA cleavage. The Argonaute family are highly basic proteins that are characterized by a central PAZ domain and a C-terminal PIWI domain (named after PIWI in Drosophila; MIWI and MILI are mouse homologues comprising a PIWI domain, whilst HIWI is the human homologue). 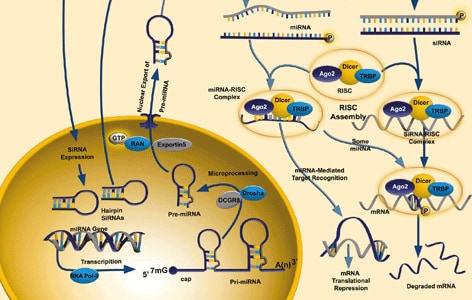 Figure 2: The RNAi pathway
Legend: Long dsRNA molecules are cleaved to produce siRNA by Dicer. siRNA molecules are then incorporated into a multiprotein RNA-inducing silencing complex (RISC). The duplex RNA is unwound leaving the anti-sense strand to guide RISC to complementary mRNA for subsequent endonucleolytic cleavage.

Endogenous siRNAs have not been found in mammalian systems, however related micro RNA (miRNA) molecules have been identified in mammals as well as in Drosophila, C. elegans and many other organisms. miRNA molecules are derived from pri-miRNA, which is cleaved by the RNase III enzyme Drosha (Figure 3) into precursor miRNA (pre-miRNA) in the nucleus.

These hairpin structures are then exported to the cytoplasm in an Exportin-5/RAN-GTPase-dependent manner. Double stranded miRNA are excised from pre-miRNA by Dicer. Thus, the resultant products have 2-3 nucleotide 3’ overhangs and 5’ phosphate and 3’ hydroxyl groups.

In Drosophila, Dicer and Drosha are associated with Loquacious and Pasha respectively, which act as co-factors in processing.

​​In contrast to siRNAs, miRNAs often exhibit imperfect sequence complementarity to target mRNA (usually in the 3’ untranslated region) and lead to the inhibition of translation as their mechanism of gene silencing.

However, miRNA molecules with full sequence complementarity can induce mRNA degradation. Classically, it was thought that mRNA was broken down in the cytoplasm following translation; it is now known that mRNA degradation occurs in processing bodies (P-bodies/GW bodies/ Dcp bodies) (Jabri 2003; Marx 2005). siRNA-induced cleavage of mRNA molecules is also thought to take place in P-bodies since Argonaute proteins concentrate in these sub-cellular structures.

Moreover, mRNAs subject to miRNA-mediated silencing accumulate in P-bodies thereby sequestering the mRNA away from the translational machinery. Studies in the fission yeast (Schizosaccharomces pombe) have demonstrated that centromeric silencing (the process of silencing transgenes that integrate into centromeric repeat regions) requires components of the RNAi pathway and therefore in this case silencing operates at the transcriptional level (Ekwall 2004; Verdel and Moazed 2005).

The effector complex in fission yeast appears to be distinct from RISC. siRNAs are incorporated instead into a complex termed RITS (RNA-induced Initiation of Transcriptional Gene Silencing). RITS comprises a chromodomain protein (Chp1), Argonaute 1 (Ago1), a protein of unknown function, Tas3, as well as siRNA molecules.

RITS targets specific chromosomal areas for silencing through the production of a repressive chromatin structure known as heterochromatin through histone methylation.

RNAi mediated by the introduction of long dsRNA has been used to investigate gene function in a variety of organisms including plants and Drosophila, however this approach cannot be applied to mammalian cells as the introduction of dsRNA longer than 30 nucleotides induces a non-specific interferon response (anti-viral response), which results in the degradation of mRNA and also causes a global inhibition of mRNA translation.

To circumvent these problems, chemically synthesized siRNA molecules that mimic Dicer products can be used to investigate gene function in mammals.

Alternatively, plasmid-vectors designed to produce short hairpin RNA molecules can be exploited to induce gene silencing in mammalian systems. Thus, in the future it may be feasible to treat human diseases by shutting off gene expression by directing the degradation of specific mRNA.