An overview of Wnt signaling

​​Wnt proteins are a family of cysteine-rich glycoproteins that play a critical role during development and in cancer. Our interactive Wnt signaling poster highlights the three Wnt signaling pathways: the canonical beta-catenin and the non-canonical planar cell polarity, and Wnt/Ca2+ pathways

In the absence of Wnt, the signaling pool of beta-catenin is maintained at low levels through degradation4–6. Beta-catenin is targeted for ubiquitination by the beta-transducin repeat-containing protein (β-TrCP) and is then degraded by the proteasome. Beta-catenin is phosphorylated by the serine/threonine kinases casein kinase 1 (CK1) and glycogen synthase kinase 3 beta (GSK3β). Phosphorylation of beta-catenin occurs in a multi-protein complex (the destruction complex), which comprises axin, adenomatous polyposis coli (APC) protein, and diversin. Upon receipt of a Wnt signal, the protein Dishevelled (Dsh) prevents degradation of beta-catenin, possibly through the recruitment of GBP/Frat-1, which in turn displaces GSK3β from the destruction complex. LRP5/6, members of the low-density lipoprotein receptor-related protein family, serve as co-receptors for beta-catenin-dependent Wnt signaling. Frodo and beta-arrestin act synergistically with Dsh, whilst Dapper has been identified as an antagonist of Dsh.

What to expect from our Wnt pathway poster?

This interactive pathway poster features all three known Wnt signaling pathways: the beta-catenin (canonical) pathway, the planar cell polarity pathway, and the Wnt/Ca2+ pathway. All three pathways are activated by binding of a Wnt-protein ligand to a Frizzled family receptor; however, they follow unique transduction cascades and harbor different proteins.

Stabilized beta-catenin enters the nucleus and associates with T cell factor (TCF)/lymphoid enhancer factor (LEF) transcription factors, which leads to the transcription of Wnt target genes such as cyclin D1, PPARD, and twin.

In the absence of a Wnt signal, TCF/LEF family members interact with transcriptional inhibitors such as Groucho, which serve to repress Wnt signaling. The repressing effect of Groucho is mediated by interactions with histone deacetylases (HDAC), which are thought to make DNA refractory to transcriptional activation.

Negative regulators of beta-catenin signaling include ICAT and duplin, which directly bind to beta-catenin preventing it from interacting with TCF/LEF7. In addition to its role in Wnt signaling, beta-catenin plays a role in cell adhesion through binding to the cytoplasmic domain of type 1 cadherins and linking them through alpha-catenin to the actin cytoskeleton.

In the planar cell polarity pathway, Wnt signaling through Frizzled receptors mediates asymmetric cytoskeletal organization and the polarization of cells by inducing modifications to the actin cytoskeleton. Two independent pathways that are initiated by Dsh trigger the activation of the small GTPases Rho and Rac. Activation of Rho requires Daam-1 and leads in turn to the activation of the Rho-associated kinase ROCK. Rac activation is independent of Daam-1 and stimulates Jun Kinase (JNK) activity5,8.

Wnt signaling via Frizzled receptors can also lead to the release of intracellular calcium. Frizzled co-receptors, involved in this pathway include Knypek and Ror2. Other intracellular second messengers associated with this pathway include heterotrimeric G-proteins, phospholipase C (PLC), and protein kinase C (PKC). The exact genes activated by the Wnt/Ca2+ pathway are unknown, but NFAT appears to be involved, which is a transcription factor regulated by the calcium/calmodulin-dependent protein phosphatase, calcineurin. The Wnt/Ca2+ pathway is important for cell adhesion and cell movements during gastrulation3,8.

Wnt antagonists can be divided into two functional classes: the secreted Frizzled related proteins (sFRP class) and the Dickkopf (Dkk) class2. Members of the sFRP class include the sFRP family (sFRP1-5), Wnt inhibitory factor-1 (WIF-1), and Cerberus. These antagonists bind directly to Wnt and alter their ability to bind to the Wnt receptor complex.

In contrast, members of the Dickkopf class (Dkk1-4) inhibit Wnt signaling by binding to LRP5/LRP6. Kremen, which binds to Dkk is thought to trigger the internalization and clearing of the Dkk–LRP complex from the cell surface. The segregation and internalization of LRP thereby render Wnt unable to activate intracellular signaling9,10. Thus, in theory, antagonists of the sFRP class inhibit both canonical and noncanonical Wnt signaling pathways, whereas those of the Dickkopf class specifically inhibit beta-catenin-dependent canonical Wnt signaling. 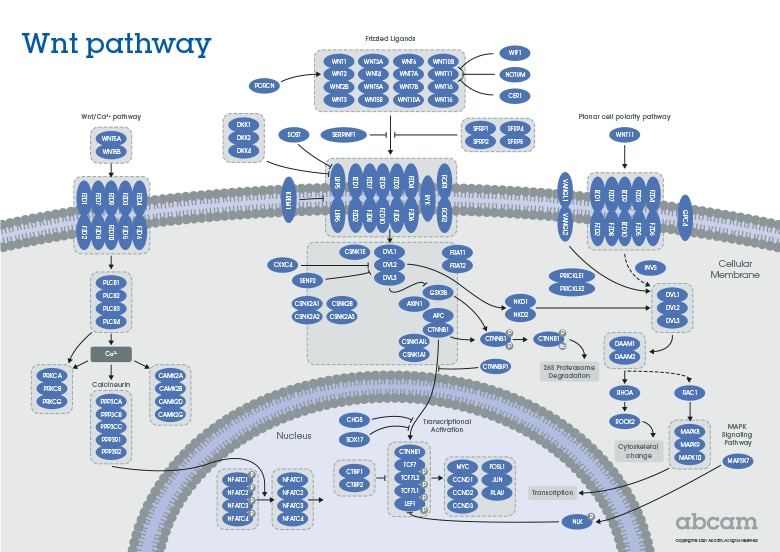