New and exclusive to Abcam! Affibody® Molecules mimic monoclonal antibodies in function but have several advantages...

Affibody® Molecules - what are they?

Affibody® affinity ligands are unique research reagents, produced using innovative protein-engineering technologies. They are small, simple proteins composed of a three-helix bundle based on the scaffold of one of the IgG-binding domains of Protein A. Protein A is a surface protein from the bacterium Staphylococcus aureus. This scaffold has excellent features as an affinity ligand and can be designed to bind with high affinity to any given target protein. The domain consists of 58 amino acids, 13 of which are randomized to generate Affibody® libraries with a large number of ligand variants. Thus, the libraries consist of a multitude of protein ligands with an identical backbone and variable surface-binding properties.

Why use Affibody® Molecules?

The advantages of Affibody® Molecules over antibodies are:
-their small size
-the simple structure of the molecules
-its robust physical properties; able to withstand a broad range of analytical conditions, including extreme pH and elevated temperature
-its ability to fold correctly intracellularly
-Conjugation or directed coupling to matrices are facilitated by the unique C-terminal cysteine.

​See what Affibody® Molecules we have available 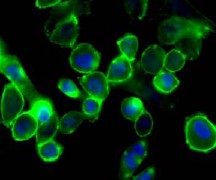 The SK-BR3 cells were stained for 30 minutes at a concentration of 1-5ug Affibody® molecule/ml.