-Please note this page is no longer updated-

Extracellular vesicle are known to facilitate intercellular communication in diverse cellular processes such as immune responses and coagulation.

Extracellular vesicles (EVs) are attracting considerable interest in the scientific community due to their role in intercellular communication. Cells have been known for a long time to release vesicles to the extracellular environment during apoptosis. However, the fact that healthy cells also release vesicles to the extracellular environment has only being recently realized. Many diverse names have been used to refer to these vesicles released by healthy cells including ectosomes, microparticles, and shedding microvesicles, just to name a few. In order to bring harmonization to the field, researchers are now encouraged to use the term extracellular vesicles (EVs) as a generic term for all secreted vesicles. Although confusion on the nomenclature of EVs has spread throughout the literature, EVs may be broadly classified into exosomes, microvesicles (MVs) and apoptotic bodies according to their cellular origin as shown in the table below:

Exosomes and microvesicles (MVs) are both released by healthy cells, although they differ in several aspects. Exosomes are nanometer-sized vesicles of endocytic origin that form by inward budding of the limiting membrane of multivesicular endosomes (MVEs) as shown in the figure below. Thus, their size is equivalent to that of the intraluminal vesicle within MVEs (40-120nm). Due to their endocytic origin exosomes are commonly enriched in endosome-associated proteins such as Rab GTPases, SNAREs, Annexins, and flotillin. Some of these proteins (e.g. Alix and Tsg101) are normally used as exosome markers. Tetraspanins (e.g. CD63, CD81, CD9) are a family of membrane proteins known to cluster into microdomains at the plasma membrane. These proteins are abundant in exosomes and considered to be markers as well. However, MVs bud from the cell surface and their size may vary between 50nm to 1,000nm. Unfortunately, less is known about the protein content of MVs, although common protein markers used to define these vesicles are selectins, integrins and the CD40 ligand. 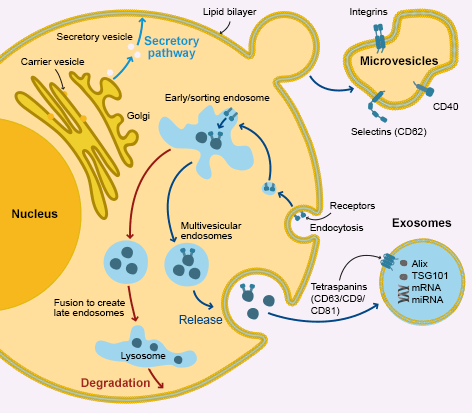 Both exosomes and MVs are known to facilitate intercellular communication processes between cells in close proximity as well as distant cells. Exosomes are released by immune cells and may act as antigen-presenting vesicles, stimulate antitumoral immune responses or induce tolerogenic effects to suppress inflammation. Tumor cells have also been shown to exploit EVs to contribute to their progression by inactivating T lymphocytes or natural killer cells as well as promoting differentiation of regulatory T lymphocytes to suppress immune reactions. Within the nervous system, EVs have been proposed to participate in myelin formation as well as neurite outgrowth and neuronal survival. Moreover, several pathogenic proteins such as prions and β-amyloid peptides have also been reported to exploit exosomes in order to propagate to other cells. MVs have been implicated in coagulation and inflammation. Platelet- and monocyte-derived MVs are capable of promoting the assembly of the enzyme complexes acting on the coagulation cascade, resulting in cell fusion events that may lead to thrombus formation. Furthermore, MVs may act as both anti-inflammatory and pro-inflammatory factors depending on the stimulus that generates them and the cell from which they are released. In both cases, interaction of MVs with the target cell leads to secretion of cytokines that modulate the inflammatory response. These are just a few of the physiological and pathological roles in which EVs have been observed to be involved in, a number which is continuously increasing.

An important breakthrough was the discovery of nucleic acids in EVs such as mRNA and miRNA. RNA molecules present in EVs seem to follow selective incorporation as evidence points to their enrichment relative to the RNA profiles of the secreting cells. Interestingly, several studies have shown that EV-associated mRNAs and miRNAs can be functionally transferred to recipient cells. A physiological relevance for the presence of mRNAs and miRNAs in EVs including immunological and vascularization functions among others have already been reported.

EVs have been found to circulate through many different body fluids including blood and urine. Due to the resemblance of EVs composition with the parental cell, circulating EVs have raised considerable interest as a source for the discovery of biomarkers. Circulating EVs are likely composed of a mixture of exosomes and MVs. EV analysis in blood and urine represents a means of reducing the complex composition of body fluids by several orders of magnitude. Thus, the isolation of EVs may result in a large enrichment of low-abundant molecules that may have particular pathophysiological significance. Signatures of miRNAs represent a recently identified biomarker family that is characteristic of tumor type and developmental origin. MiRNAs have been already associated with EVs, and hence, circulating tumor-derived EVs are being analyzed to search for specific miRNA signatures. Our Firefly™ technology allows multiplex cellular miRNA profiling using flow cytometry.

Find out more about Firefly™ technology

A major challenge is the establishment of methods to allow discrimination between exosomes and MVs. There is enough evidence for differences in the origin, size, morphology and buoyant density. However, these differences do not seem to be enough for clear distinction. The most widely used method for the isolation of EVs is differential ultracentrifugation. Differences in buoyant density and floatation velocity can be used subsequently to separate EVs based on their size. Complementary molecular techniques such as immunoblotting, mass spectrometry, flow cytometry, and electron microscopy (EM) are then required for further characterization. Flow cytometry is a powerful method for both the quantitative and qualitative analysis of EVs. Immunoblotting and mass spectrometry cannot answer the question of whether the changes observed in protein expression are due to changes either in the composition of EVs or the number of EVs. EM, on the other hand, is not really amenable to experiments involving more than a few samples due to the complexity of sample processing and image acquisition. Thus, flow cytometry harbors the potential to become the method of choice for easy and fast analysis of EVs. However, conventional flow cytometry faces several challenges when applied to this field.

Find out more about flow cytometric analysis of EVs