​​Set yourself up for success with recombinant antibodies.

What are recombinant antibodies and how are they produced?

In comparison, monoclonal antibodies are typically made using B-cells from an immunized animal to form immortal hybridoma cells that secrete the desired antibody clone. While this technique produces highly consistent, specific, and sensitive monoclonal antibodies in large quantities, over time hybridoma cell lines can experience genetic drift, resulting in slight variations to the antibodies produced. Antibodies against difficult targets, ie toxins, nucleotides, and membrane-bound proteins, can’t always be made with this in vivo model either.

Recombinant antibodies overcome the limitations of traditional antibody production to give you the highest level of consistency between batches, unrivaled reproducibility, confirmed specificity, and a guaranteed long-term supply.

Figure 2. Our recombinant anti-TLE 1 antibody [EPR9386(2)] (left) being tested on knockout and wild-type samples against a monoclonal anti-TLE 1 [OTI1F5] antibody. 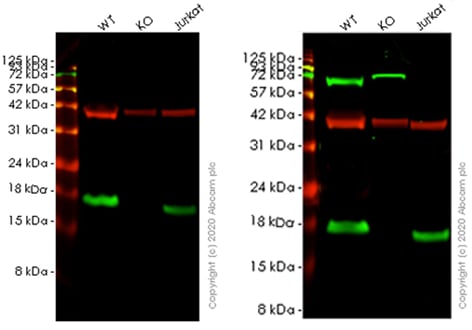 ​​Figure 3. Our recombinant anti-GRIM19 [EPR4471(2)] antibody (left) being tested on knockout and wild-type samples against our monoclonal anti-GRIM19 [6E1BH7]

KD value is a quantitative measure of antibody affinity. The lower the Kd value, the higher the affinity of the antibody. On average, our recombinant RabMab antibodies have KD values in the picomolar (10-10–10-12) range, which is considered to be very high affinity (see the data for 863 RabMAb antibodies).

High-affinity antibodies allow greater sensitivity in assays, as they bind strongly to the antigen and maintain this bond better under difficult conditions compared to low-affinity antibodies.  Analysis of KD values of our recombinant anti-PDL1 antibody shows that its affinity remains high across 5 different batches (Table 1).

Ease of scalability and continuity of supply

​With the antibody genes isolated and the sequence known, antibody expression can be carried out at any scale and the long-term supply of antibody is guaranteed.  This makes recombinant antibodies a great solution for long-term studies or using the same antibody across multiple samples.

Once the antibody-producing genes are isolated, animal-free in vitro production can be implemented. For antibodies generated using our phage display technology, even the gene of the antibody can be isolated with an animal-free procedure.

View our comprehensive range of recombinant antibodies to find your target.

Why customers love our recombinant antibodies

Our recombinant antibodies are featured in over 50,000 publications.

"In long-term studies or at service labs such as mine, we often use the same antibody for many samples. It is very important to have batch-to-batch consistency. I always test my protocols when receiving a new batch of antibody. One of the things I like about Abcam's RabMAb®s is that they always work the same, therefore almost no optimization is needed."

"All of the recombinant antibodies gave me a specific and nice band compared to the polyclonal antibody. It was consistent in terms of quality and experimental outcomes with only a low amount of protein required."

​“Previously we have tried several anti-H3K27M antibodies, but sometimes it was difficult to distinguish H3K27M-positive cells and non-specific signals. This antibody (H3K27M RabMAb®) showed a more specific and sensitive detection of the H3K27M protein with a very low background.”