Poor reproducibility can have a significant impact on your research, career, and scientific progress as a whole. However, small changes, like selecting recombinant antibodies, can make a big difference.

Achieving a result, whether it’s an important novel finding or reproducing another scientist’s work, is a thrilling moment. However, if you have experienced the frustration of irreproducible results, you will know how much time, precious samples, and money this wastes.

Not only is irreproducibility frustrating for researchers, but it also slows down the progression of science. Scientific discovery builds on previous findings to answer new questions and further the field of research. Therefore, being unable to reproduce previous work has a huge impact on both the scientific community and the general public.

This is the reproducibility crisis in science.

What is the scale of the reproducibility crisis?

A survey of 1,576 researchers by Nature revealed that over 70% of researchers cannot reproduce another scientist’s experiments1. If you consider how often your work relies on protocols or results from other labs, you can begin to comprehend the size of the problem. This irreproducibility correlates to an enormous amount of wasted time and money, in addition to the potential impact on your publication and career success.

A paper by Andrew Bradbury in 2015 estimated that $1.6 billion was spent on poorly characterized antibodies world-wide2. However, since this paper was written, this estimate has more than doubled to $3.5 billion3. 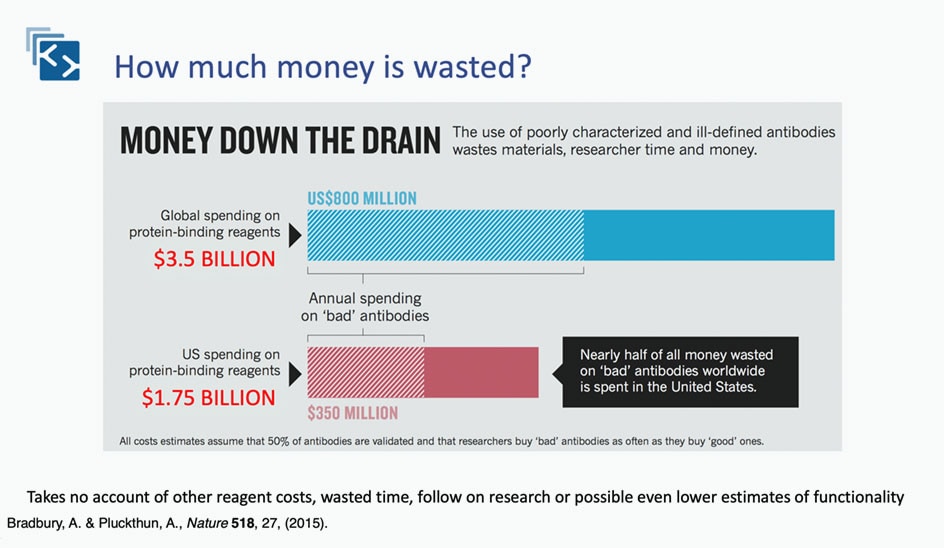 What can you do to improve reproducibility in your work?

Although 90% of respondents to the Nature survey agreed that there was a reproducibility crisis, only 33% had considered how to improve reproducibility over the past five years.
Both collaboration and individual efforts are needed to overcome the reproducibility crisis but there are simple changes that you can take to improve reproducibility in your work. Although many factors impact reproducibility, a paper published in The Economics of Reproducibility in Preclinical Research4, suggested that these can be split into four main categories: biological reagents and reference materials, study design, data analysis, and reporting, and laboratory protocols.
While you should ensure best practices are in place when designing experiments, around a third of irreproducible results are estimated to be derived from the biological reagents used4. Therefore, carefully selecting the reagents for your research is one straightforward step that could have a large impact on both your research and other researchers who build on your work in the future.
When selecting an antibody, it is common for researchers to choose antibodies that have been cited in previous studies. However, selecting antibodies on citations alone can carry a great deal of risk. Antibody production and validation techniques are continually advancing, and antibodies that were once considered specific have since been shown to react with other proteins. For example, a study by Lukinavicius et al. found that certain antibodies against Cdk1 also recognized Cep152, and these antibodies have been used in over 200 papers5.

​​Choosing the most reliable type of antibody is a simple solution to avoiding irreproducibility. To achieve accurate, reproducible results, the antibodies used in your research need to have high specificity and low batch-to-batch variability but these factors differ between polyclonal, monoclonal, and recombinant monoclonal antibodies.

Polyclonal antibodies have a high degree of variability and the ability to bind to multiple epitopes, due to being derived from a natural immune response. Whilst the heterogeneity of polyclonal antibodies offers advantages in some applications6, every time a new batch is created it is necessary to reimmunize another group of animals, making it difficult to obtain a consistent polyclonal mixture. This means that specificity can be variable and there is a high risk of batch-to-batch inconsistency.
Traditionally-produced monoclonal antibodies are derived from a single B-parent clone, which ensures they detect a specific epitope. Although the use of a hybridoma allows the generation of identical monoclonal antibodies, over long periods, genetic drift can occur, which results in slight variations in antibody batches over time. Furthermore, 40% of hybridoma-produced monoclonal antibodies have been shown to express additional productive heavy or light chains, rendering these antibodies non-specific7.
Recombinant monoclonal antibodies overcome many of the issues associated with polyclonal and traditional monoclonal antibodies. By cloning antibody genes into high-yield expression vectors, the encoding sequences can be controlled, resulting in improved antibody specificity and sensitivity. This also enables the antibodies to be made against virtually any antigen, including non-immunogenic and toxic antigens. Additionally, the recombinant production method avoids several problems associated with hybridoma use, such as gene loss, gene mutations, and cell-line drift. This leads to antibodies with very high batch-to-batch consistency, which will give you highly reproducible results.

​Validating your antibodies before use is essential to ensure application-specific performance, regardless of the antibody type being used. However, selecting highly specific and reproducible antibodies can reduce the time and resources required for validation.

Testing antibodies on knock-out cell lines is the gold standard for determining antibody specificity. The western blots below compare the specificity of a monoclonal and a recombinant antibody in both wild-type and knockout samples. If the antibody has high specificity, the band or bands specific to the target protein will disappear in the knock-out sample. While this is the case for the recombinant antibody, the traditional monoclonal antibody displays additional cross-reactivity. 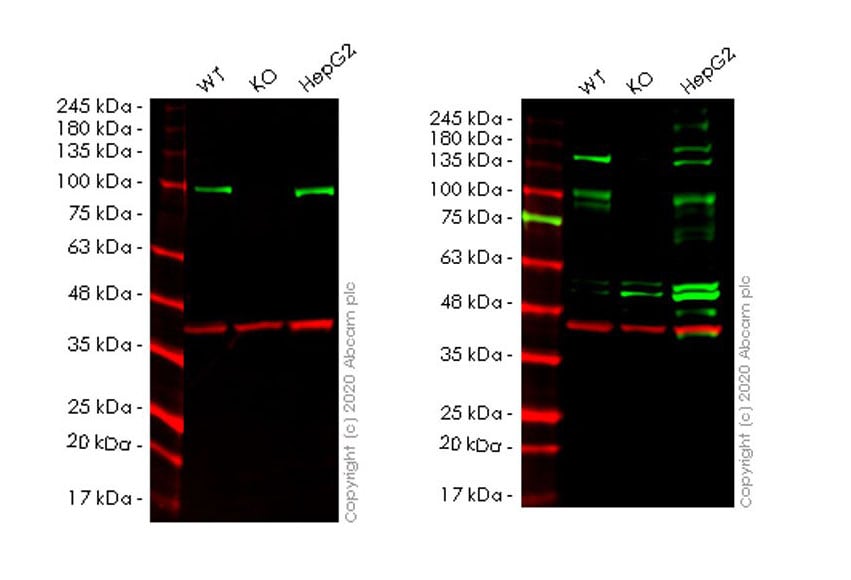 The future of reproducibility

Solving the reproducibility crisis is a substantial task that requires coordination and input from all researchers. But, like the many small grains of sand that make up a beach, taking small steps to improve reproducibility in your own experiments can have a large impact on solving the bigger problem.

Whether it’s ensuring correct validation of reagents in your application, optimizing data analysis, or making the switch to recombinant antibodies, you can have a vital role in improving scientific reproducibility.