Time to check your cell cultures. Your heart sinks: many of the cells look dead. Might it be related to stimulation with that latest batch of cytokine IL-6, sourced from a new supplier? Did the sample contain too much endotoxin? Were there stability issues, and the protein degraded? Maybe other contaminants affected it? Either way, it’s a few days wasted, and next week will be spent in batch validation – or possibly looking for a new protein source – rather than addressing your research questions.

Dr Gráinne Dunlevy, Head of Protein Sciences at Abcam, feels your pain because she’s been there too. A protein scientist with 16+ years of experience, she has spent many of those years working at pharmaceutical companies, expressing proteins for in-house researchers who couldn’t get the high quality they needed on the protein manufacturing market.

“Our scientists would tell me all the time that they couldn’t buy a contaminant-free protein for their assays, selections or immunizations that had low-enough endotoxicity, was stable and folded correctly, and had all the right PTM [post-translational modifications],” she remembers. “Often, they had already used whatever they could find commercially, just to get started – and when it didn’t work, they would have to start again with my protein. It wasted a lot of time for them. I was frustrated back then that people would accept sub-standard proteins.”

Now Dr Dunlevy aims to help not just her old pharma colleagues, but also researchers without the benefit of an in-house protein expression department.

She and Dr Bernd Gerhartz, the VP of Technology Development at Abcam in Cambridge together decided to launch a market-leading range of top quality, commercially available proteins – guaranteed identical to human native proteins, free from contamination, and highly consistent from batch to batch. Thus began our premium bioactive grade proteins, a growing catalog of small human proteins. 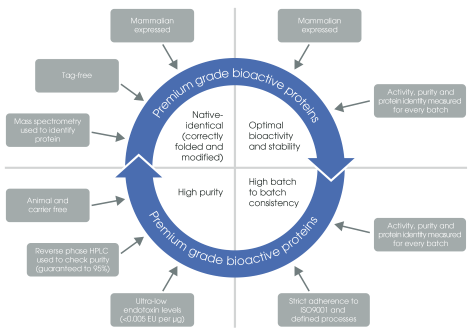 “We wanted this range of proteins to be identical to native human proteins, which means tag-free, with the correct folding and PTM to guarantee optimal bioactivity and stability.” Dr Dunlevy explains. “They needed to be contaminant-free – that is animal- and carrier-free, with ultra-low endotoxin levels. Finally, we check the identity, purity, and activity of every batch to ensure it is identical to previous batches, or we don’t release it.”​​

Premium bioactive grade proteins are exclusively generated in mammalian expression systems, a rarity in commercial protein manufacture since optimization is harder and yield is lower. The rewards for overcoming such challenges are high – human-origin proteins made in mammalian systems are folded and modified identically to the human version, unlike their prokaryotic-generated equivalents. Bacterial cells just don’t have the cellular machinery to correctly modify or fold any human-origin protein they express. Only mammalian systems can therefore produce native-identical proteins, which are also more stable (due to their correct structure) than their bacterial counterparts.

The mammalian expression also explains the ultra-low endotoxin level – guaranteed to <0.005 EU per µg – since there are no bacteria in the system to contaminate samples.

These proteins are given to customers “tag-free”. This is achieved by introducing a protease site into the DNA construct: the expressed protein is purified using the tag, which is then removed by enzymatic cleavage, then the sample is purified a second time. “This second purification step adds time and we lose protein on every processing step; however, we are committed to delivering a high-quality product and so put this extra effort in,” says Dr Dunlevy.

Once a protein is made, mass spectrometry is used to confirm the protein identify, then reverse phase HPLC to check its purity (guaranteed to 95%) – this can flag erroneous PTM, folding, or accidental cleavage with stray proteases. These measures are well above and beyond the protein manufacturing industry standard, which usually relies solely on SDS-PAGE for identification.

“Mass spectrometry and HPLC are standard in big pharma for checking in-house proteins, but are seldom used in commercial protein production,” says Dr Dunlevy. “But eyeballing a band on an SDS-PAGE gel can’t accurately measure the purity of a protein. Even destaining a protein too much can make you think it’s purer than it is. You can’t accurately measure the molecular weight of a protein on a PAGE gel either, and so can’t tell if the protein is truncated. We use reverse phase HPLC for quantification of our proteins as this is more accurate than absorbance readings.”

Why use premium bioactive grade proteins?

“It’s all about what you need your protein for,” states Dr Dunlevy. “In a biochemical assay, such as a western blot, you just want to detect the presence and quantity of the protein, so a protein that’s almost (but not quite) the same may be fine. However, for cell-based assays – such as those testing viability, proliferation, cytotoxicity or cell death – where functional bioactivity is important, it’s essential to use a protein that is identical to the human-origin native protein.”

What is meant by optimal functional activity? The same activity as that seen in the human body. A protein ligand that is native-identical will achieve the quickest and most stable binding to its native receptors, and enzyme catalysis will be as fast as possible.

Since the premium bioactive range aims to replicate the human native protein exactly, tag removal is essential. “If you want to use a commercial protein to raise antibodies against, for instance, then you can’t use a protein with a tag attached as the antibodies might recognize epitopes on the tag rather than on the target protein,” Dr Dunlevy explains.

​This high-quality approach can be cost-effective too – the stability conferred by using a mammalian expression system means the proteins store better than those from bacteria, with less likelihood of degradation or clumping, so a little can go a long way.

Moreover, if the goal of your research is clinical use – where using a native-identical protein is essential – then keeping the same protein from the outset of a development project can save you time and money. You can omit validation steps necessary for switching products and decrease the risk of discovering too late that early results were an artefact of using a non-native protein.

Similarly, high batch-to-batch consistency, with well-documented evidence, has huge time-saving implications – you won’t need to validate each batch in-house or suffer failed assays due to protein variability, allowing you more time to concentrate on your research topic.

Abcam has a long history of making top quality antibodies for the general research market, and Dr Dunlevy thinks the move to make high specification proteins such as cytokines is a natural next step.

“To make our antibodies, we needed human-identical antigens to raise them against,” she explains. “We couldn’t find these to buy, so we had to make our own. That means we’ve got years of expertise in making high quality proteins, and we felt it would be useful to make that resource available to those who needed it.”

We currently offer 29 proteins in our premium bioactive range, currently consisting of growth factors and cytokines, and intend to add more protein types in the next few months.