This protocol will guide you through isolating immature bone marrow-derived dendritic cells (BMDCs) from mice.

Get the PDF version

! Ensure that all the reagents and samples are kept on ice from steps 1–6 as this has a positive impact on cell viability.

! In order to maintain sterility, perform all steps in a laminar flow hood with sterile utensils. Watch our video guide on aseptic technique.

1. Cut the back legs above the hip joint in order to access the femur and tibia, leaving knee and ankle joints in place, and debride the muscle and tissue from by rubbing with KimwipesTM.

! The femur tends to have more marrow than the tibia.

! Use only intact bones, as the bone marrow will not be sterile if they break.

2. Fill a petri dish with 70% ethanol and dip the cleaned bones into it for 5–10 seconds to sterilize their exteriors before keeping them in a sterile tube on ice until all the bones are flushed.

! The bones can be left in ethanol for longer while each bone is flushed, but be aware that it can soak into the bone and kill viable cells.

3. In a laminar flow hood using sterile utensils, cut both ends of the bone with scissors as close to the joints as possible. Fill a syringe with ice-cold RPMI complete (R10) media, insert the syringe needle into the bone and flush out the bone marrow into a centrifuge tube on ice. Flush 2–3 times until the bones are completely white. Dissolve any clusters by pipetting.

5. Resuspend the cell pellet in R10 and count viable cells using a hemocytometer and trypan blue.

! See our detailed protocol on using a hemocytometer to obtain a viable cell count.

! Add media very gently so as not to disturb the growing cells.

! Remove media very gently so as not to disturb the growing cells.

10. Briefly centrifuge the removed volume of media (as the DCs are only loosely adherent) and resuspend in 10 mL of fresh R10 + 20 ng/mL GM-CSF and add this back into the original culture.

11. Non-adherent and loosely adherent cells in the culture supernatant can be harvested by gentle washing with PBS, and then pooled for subsequent experiments.

! The majority of adherent cells will be macrophages, while those that are in suspension or loosely adherent will be dendritic cells (DCs) and F4/80+ macrophages. For a highly pure fraction, it is recommended to take measures to deplete F4/80+ cells and enrich the population for CD11c+ cells.

! Most of the macrophages in suspension will dually express F4/80+ and CD11c. The F4/80+ cells can be removed via positive selection with anti-F4/80 magnetic beads. After this step, CD11c+ DCs can be positively selected from the flow-through using anti-CD11c magnetic beads.

! Avoid using EDTA here as this will remove the adherent macrophages, diluting your DC samples.

12. The immature DC’s can be used immediately after purification, or further cultured if the user wishes to obtain mature cells.

! DC’s are loosely adherent and can mature simply by adhering to a plate, therefore a non-tissue culture treated 96-well u-bottom plate can be used to prevent premature maturation.

It is recommended to perform flow cytometry on an aliquot of cells to check for purity. A purity check reagent can also be included to label cells still bound to magnetic beads.

We asked an independent collaborator, Dr Karen Wozniak (Assistant Professor of Research, The University of Texas at San Antonio), to run our BMDC isolation protocol. Dr Wozniak was able to successfully purify a population of immature DC’s, using the abcam reagents mentioned throughout the protocol. The data for these are outlined here.

After culture with GM-CSF and purification using positive selection, cells were assessed for purity by flow cytometry. After gating on CD45+ cells, purity was determined based on the proportion of the population expressing CD11c (Figure 1).

Immature DCs can be used immediately after purification if desired. However, users may wish to further culture their DC’s with an antigen before adding T cells, in order to evaluate T cell proliferation in response to their antigen. Selected cytokines (eg IL-2 (ab9856), IL-4 (ab9729), IFN-gamma (ab9922), or LPS) can also be added in order to encourage increased antigen presentation by the DC’s to the T cells.

To perform cell stimulations or treatments, plate the purified cells according the requirements of the downstream application.

Our independent collaborator used flow cytometry to assess the phenotype of mouse BMDCs immediately after purification (Figure 2) and following 24-hour culture of 2 x 105 cells per 100 µL with 20 ng/mL IL-4 (ab9729) and 50 ng/mL LPS. 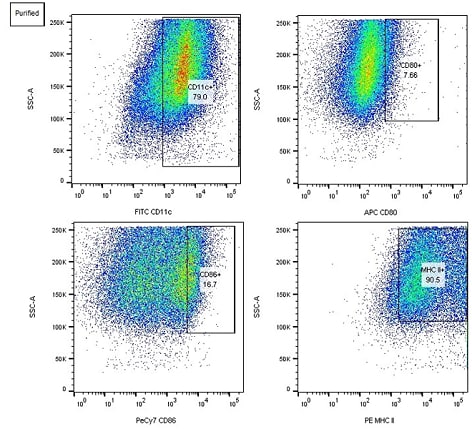 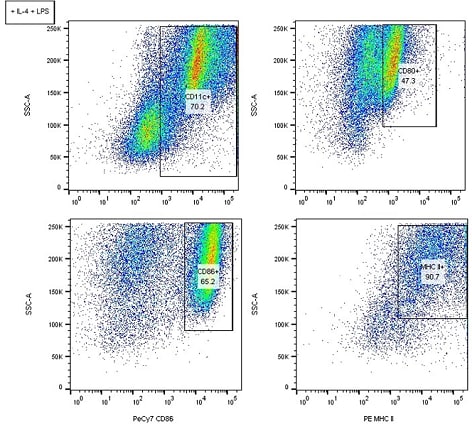 Common DC markers, as indicated in our immune cell markers guide to phenotyping.

*If FBS is not heat-inactivated, inactivate it by placing in a 56oC water bath for an hour and then cool to room temperature

Prepare the following solution before beginning the experiment.

Add the following reagents to RPMI medium before filter-sterilizing into a sterile, endotoxin-free bottle through a 0.22 µm filter.