This article describes why compensation is required for flow cytometry and how to apply it. Please refer to the manufacturer's instructions and software manual for a more detailed compensation procedure for your instrument.

Within a flow cytometer, the appropriate ranges of excitation and emission wavelengths are selected by bandpass filters. However, when emission spectra overlap, fluorescence from more than one fluorochrome may be detected. To correct for this spectral overlap, a process of fluorescence compensation is used. This ensures that the fluorescence detected in a particular detector derives from the fluorochrome that is being measured.

In the example below, following excitation with 488 nm light, PE emission is largely detected in the detector specific for PE but the emission tail lies within the range of the bandpass filter used for detection of PE-Cy5. This will be seen as "false positive" signals in the PE-Cy5 channel and fluorescence compensation is needed to correct for this overlap. 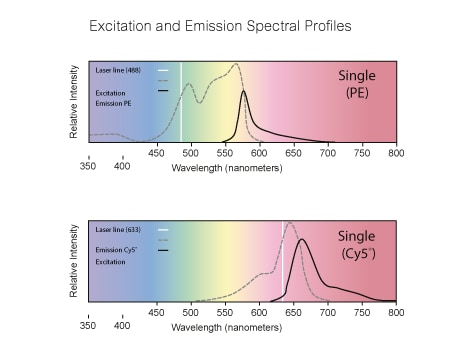 The procedure for setting correct fluorescence compensation is essentially the same on any cytometer but there are differences between the various available instruments, which makes it difficult to provide a "one size fits all" protocol. However, the following guidelines should be suitable in most cases. We always recommend reviewing the flow cytometer manufacturer's instructions for detailed compensation guidelines.