Flow cytometry is a popular laser-based technology to analyze the characteristics of cells or particles. Discover more with our introduction to flow cytometry.

View a PDF version of this page

Flow cytometry is a widely used method for analyzing the expression of cell surface and intracellular molecules, characterizing and defining different cell types in a heterogeneous cell population, assessing the purity of isolated subpopulations, and analyzing cell size and volume. It allows simultaneous multi-parameter analysis of single cells.

It is predominantly used to measure fluorescence intensity produced by fluorescent-labeled antibodies detecting proteins, or ligands that bind to specific cell-associated molecules such as propidium iodide binding to DNA.

The staining procedure involves making a single-cell suspension from cell culture or tissue samples. The cells are then incubated in tubes or microtiter plates with unlabeled or fluorochrome-labeled antibodies and analyzed on the flow cytometer. 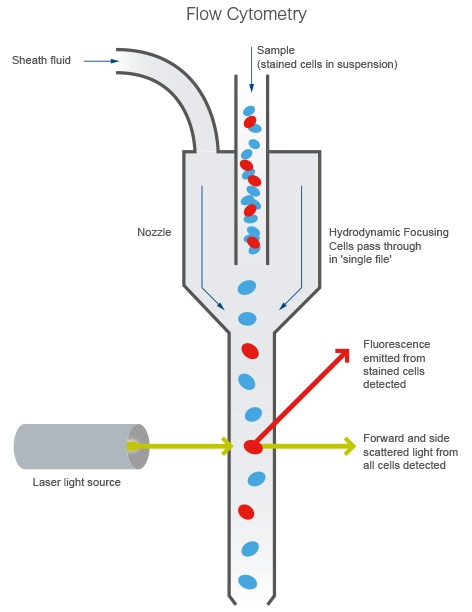 Figure 1. Overview of the flow cytometer. Sheath fluid focuses the cell suspension, causing cells to pass through a laser beam one cell at a time. Forward and side scattered light is detected, as well as fluorescence emitted from stained cells.

When a cell suspension is run through the cytometer, sheath fluid is used to hydrodynamically focus the cell suspension through a small nozzle. The tiny stream of fluid takes the cells past the laser light one cell at a time (Figure 1).

The flow cytometer: measurement of forward and side scatter of light

Cells or particles passing through the beam scatter light, which is detected as FS and SS. FS correlates with cell size and SS is proportional to the granularity of the cells. In this manner, cell populations can often be distinguished based on differences in their size and granularity alone. 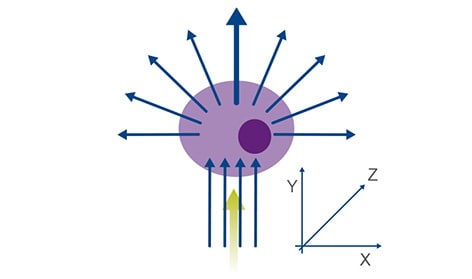 Figure 2. Light scatter as the green laser interrogates the cell. The direction of light scattered by the cell correlates to cell size and granularity.

A useful example of this is when running blood samples on the flow cytometer.

Therefore, these cells can be separated into different populations based on their FS and SS alone. 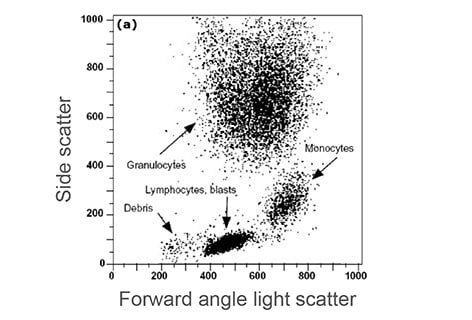 Figure 3. Dot plot of FS versus SS. Each dot represents a single cell analyzed by the flow cytometer. The characteristic position of different cell populations is determined by differences in cell size and granularity. Image reference: Riley and Idowu. Principles and Applications of Flow Cytometry*.

The flow cytometer: measurement of scattered light and fluorescence

As well as separating cells based on FS and SS, cells can also be separated by whether they express a particular protein. In this case, a fluorochrome is often used to stain the protein of interest. Fluorochromes used for the detection of target proteins emit light when excited by a laser with the corresponding excitation wavelength. These fluorescent stained cells or particles can be detected individually.

Forward and side scattered light and fluorescence from stained cells are split into defined wavelengths and channeled by a set of filters and mirrors within the flow cytometer. The fluorescent light is filtered so that each sensor will detect fluorescence only at a specified wavelength. These sensors are called photomultiplying tubes (PMTs).

Figure 4. Fluorescent light is filtered so that each PMT detects a specific wavelength. The PMTs convert the energy of a photon into an electronic signal – a voltage.

Various filters are used in the flow cytometer to direct photons of the correct wavelength to each PMT (Figure 5).

Long pass (LP) filters allow transmission of photons above a specified wavelength. Dichroic filters/mirrors (such as dichroic LP mirrors) are positioned at a 45° angle to the light beam.Sub heading

As the fluorescing cell passes through the laser beam, it creates a peak or pulse of photon emission over time. These are detected by the PMT and converted to a voltage pulse, known as an event. The total pulse height and area is measured by the flow cytometer. The measured voltage pulse area will correlate directly to the intensity of fluorescence for that event. 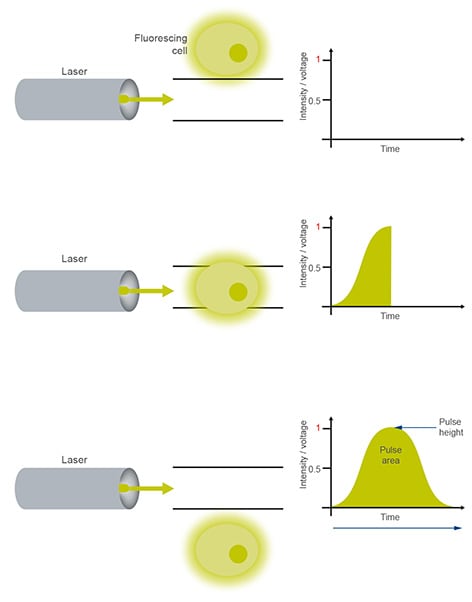 The pulse area is calculated by adding the height values for each time slice of the pulse, determined by the speed of the analog to digital converter (ADC), which is 10 MHz (i.e. 10 million per second or 10 per microsecond).

These events are assigned channels based on pulse intensity (pulse area). This signal can be amplified by turning up the voltage going through the PMT. 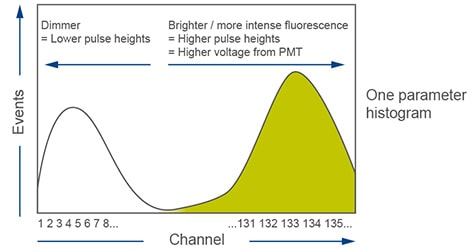 Figure 7. A one parameter histogram plotting channel number vs. number of events. The channels are usually viewed on a log scale on the x axis.

For a positive result you are looking for the shift in intensity between negative control and a positive samples (Figure 9).

The ability of a given antibody to resolve a positive signal from a negative signal often depends on which fluorochrome conjugate is used.

A highly expressed antigen will usually be detected and resolved from the negative control with almost any fluorochrome. An antigen expressed at lower density might require the higher signal to background ratio provided by a brighter PE or APC conjugate to separate the positive cells adequately from the unstained cells.

The relative fluorochrome intensity depends on the instrument. This is because of differences in the laser and filter combinations used on the different instruments. Be sure to use the appropriate FACS instrument.