​Generating CRISPR KO cell lines requires multiple steps, each with it's own pitfalls you'll need to watch out for to ensure success.

With the use of CRISPR knock-out (KO) cell lines on the rise for use in applications from antibody validation to investigating the proteome, many researchers are exploring how to generate CRISPR KO cell lines within their own lab and the most effective methods of doing this.

The standard workflow to generate CRISPR KO cell lines involves five major steps from project planning to confirming the desired CRISPR edit in your cell lines. These steps are:

Each of these steps requires careful consideration and technical skill in executing the many different methods involved. 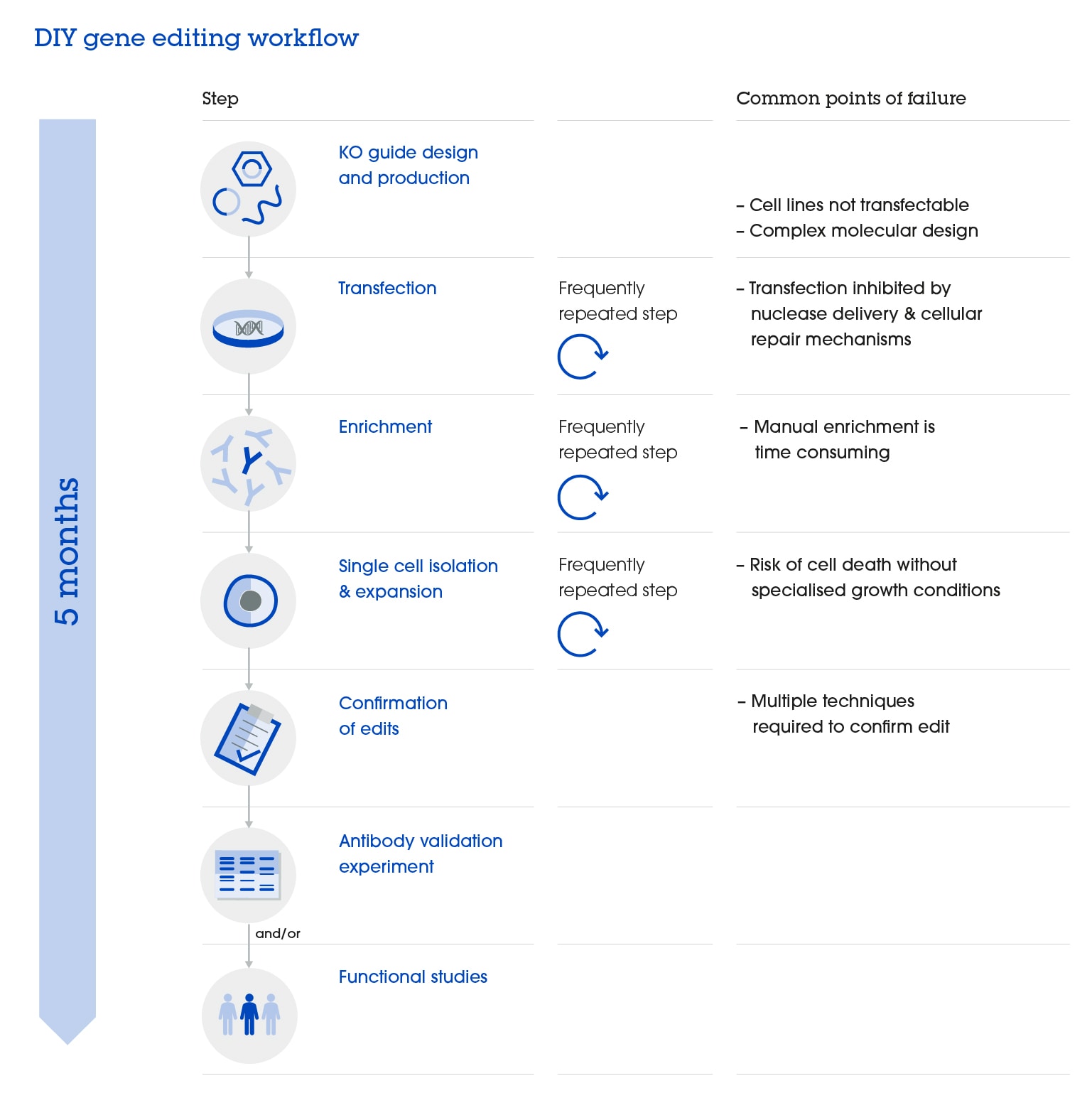 ​The guide RNA recognizes the target gene region and directs the gene-editing machinery to this section of DNA. A wide variety of guide formats can be used in the generation of CRISPR KO cell lines; single guide RNA (sgRNA), a two-part oligo system of cr:tracrRNA, in vitro-transcribed RNA, plasmid and lentivirus.

The use of plasmids and lentivirus, though perhaps more technically familiar to researchers, is time-consuming, requires selection agents and is prone to off-target edits. However, lentivirus may offer some advantages for difficult-to-transfect cells. Use of sgRNAs offers reduced off-target effects and time-saving benefits. The use of multiple gRNAs can increase the chance of obtaining the desired edit and save time downstream in clone selection stages 2. But these gRNAs must be targeted correctly.

Once the CRISPR KO strategy has been decided, determining the most efficient method for cell transfection is next. This is considered to be the most difficult step in the CRISPR workflow by many researchers 3; extensive optimization of the transfection conditions for each cell type is often needed to accurately deliver the CRISPR gene-editing machinery into the cell.

Some cell types, including stem cells, primary cells and immune and hematopoietic cell lineages are more difficult to transfect, as they have altered cell repair mechanisms and lower cell viability. Successful transfection often depends upon previous experience with the cell line of choice to understand the cell characteristics.

To develop a homogenous cell population that contains the desired KO, a clonal selection workflow is considered best practice. This allows full characterization of the KO and simple interpretation of results. Enrichment reduces the number of required cell passages to achieve a clonal population, increasing the health of the cell population in downstream experiments.

However, these stages can be time-consuming and technically demanding, requiring extensive screening of multiple clones to identify the required CRISPR KO. Without fully optimized growth conditions it can lead to the death of precious cell samples and the loss of all your work in generating CRISPR KO cell lines.

Once a CRISPR KO cell line has been established, adequate validation of the specific gene edits is important.

For most purposes and to ensure the downstream viability of your work, this requires the characterization of the CRISPR KO. Validating via multiple methods offers the best assurance of an accurate gene-edit. Common methods to validate engineered cell lines include Sanger sequencing, next-generation sequencing and qPCR to verify the edit at a genomic level. Western blot and mass spectrometry can provide confirmation of the KO at the proteomic level. For functional studies immunohistochemistry, immunocytochemistry and FACS are often used.

Generating your own CRISPR KO cell lines involves long, detailed protocols with extensive hands-on time, where a simple slip can cause the entire experiment to fail and results aren’t known until the end.

There are common points of failure at each step in the protocol for CRISPR KO cell lines, with some steps that require extensive analysis time. These are due to the need for detailed cell line knowledge and CRISPR experience and skill. The ability to include a high number of optimization points in your protocol for steps such as transfection can increase success. Automation and large-scale CRISPR operations can help to incorporate these optimizations 3, however, the majority of labs are not equipped to deal with such extensive operations.

The average time taken by researchers to generate a CRISPR KO cell line is almost five months, and most researchers are forced to restart their experiments 3-4 times before they achieve the knockout cell lines they need 3.

Though working with CRISPR can be an intensive learning experience, if you require CRISPR KO cell lines faster and with less hassle we have established a catalogue of CRISPR KO cell lines of over 1000 key targets in industry-standard cell line backgrounds, such as HeLa and HEK293T.

Reducing your preparation time from the standard five months needed to generate a CRISPR knock-out cell line to the time it takes to order it online with our CRISPR KO cell line range, you can reclaim months of experimental time and reach your solutions quicker.

These CRISPR KO cell lines have been extensively validated using Sanger sequencing and, in many cases, Western blotting to confirm full gene ablation at the genomic and proteomic levels.