CRISPR-Cas9 is being used in a variety of assays to increase accuracy and speed in drug discovery and development.

The CRISPR revolution has fueled a rapid expansion of the use of gene-edited cells in a variety of drug development assays. CRISPR-Cas9 gene editing has increased the accuracy and speed of the pre-clinical drug development process. This technology has allowed precise target modulation for better hits, enhanced assays for improved disease recapitulation and the ability to respond rapidly to clinical outcomes 1,2.

Each of these elements must be tailored to the biology being studied 1. CRISPR offers precisely targeted gene-editing, allowing full gene knockout, targeted gene knock-in or the activation or partial inhibition of genes through CRISPRa/i. Selecting the right assay to measure cellular responses to gene perturbation and any compounds to treat such disease states is vital 2. This ensures the right data is being collected and that any interpretations being made regarding gene function or hit ID from these assays are accurate.

CRISPR-edited cells were first applied to cancer biology. For these studies, knockout cell line responses to a simple cell survival assay were sufficient to predict drug responses in tumors over-expressing potential oncolytic genes 1. However, for more complex diseases or to present a complete picture of cell behavior for accurate hit ID, measurements such as cell health may not offer the level of information needed. In such cases, more advanced phenotypic analyses must be coupled to CRISPR-based screening efforts.

CRISPR is now being used in a range of assays, both in vitro and in vivo, throughout the preclinical phase to deliver improved results and speed processes. Research has shown that the most commonly measured cellular endpoint in CRISPR screening studies was reporter assays, followed by cell proliferation and protein secretion. Other desirable endpoints measured in assays using CRISPR-edited cells were apoptosis, cell viability (membrane integrity), high content imaging for phenotypic changes and cell cycle analysis 3. These assays are typically performed using the CRISPR-edited cell line alongside the parental wild-type (WT) cell line for the comparison of any response 2.

The following case studies show how CRISPR has been applied to increase accuracy and speed the drug discovery process, providing answers that were unavailable with previous technologies.

Gefitinb and erlotinib target the epidermal growth factor receptor (EGFR) in the treatment of non-small cell lung cancer  4. Following observed patient resistance to these treatments, it was determined that the T790M oncogenic mutation in EGFR was responsible for this effect, preventing the drugs from interacting with the EGFR tyrosine kinase domain target site 5,6. Using structure-based design Astra Zeneca developed osimertinib to target the T790M mutation. However, in clinical trials resistance was again observed from a second acquired mutation in EGFR, C797S 7. 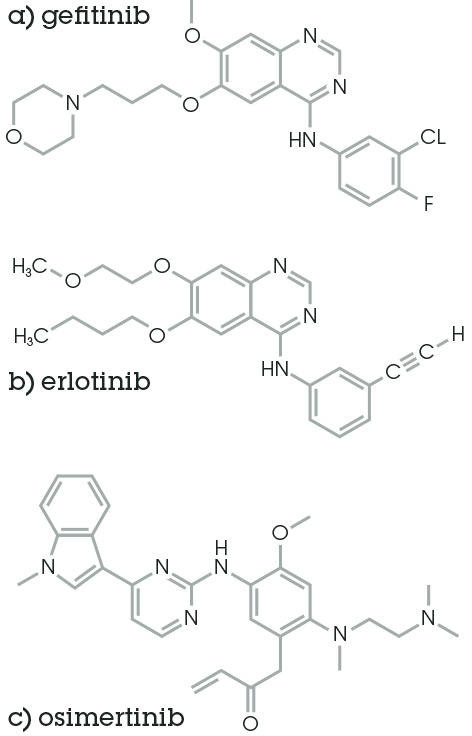 Chemical structures of gefitinib, erlotinib and osimertinib. As patient resistance was acquired to each drug CRISPR engineering helped speed the identification of new next-generation therapeutics to treat NSCLC patients.

To avoid unnecessary development costs and allow rapid progress in this field, they looked for a way to quickly feed this information back into their pre-clinical drug discovery program. Using CRISPR-Cas9 the exact C797S mutation was created in cancer cell lines for use in vitro and in vivo. Application of the relevant C797S cell line model enabled drug screening to identify next-generation compounds targeting this new mutation. This patient in a dish strategy was used to expose the CRISPR-edited cell line model to candidate drug compounds in screening and the results were analyzed via high throughput ELISAs for the identification of precision medicines 7.

Macrophages are part of the innate immune response and change their physiology and cytokine profile to promote inflammation and tissue repair following injury. In patients with chronic obstructive pulmonary disease (COPD), there is a decreased anti-inflammatory macrophage activity in lung cells 8.

Salt-induced kinase (SIK) has been proposed as a drug target for COPD. Studies from Merck showed that inhibition of this target changes the macrophage cytokine profile to promote anti-inflammatory responses, with an increase in IL-10 and inhibition of TNFα 9.

Using this system one combination of SIK isoforms was observed to give the desired reduction in IL-10 protein fold change in the cell activity assay when the cells were challenged with lipopolysaccharide 10. The results allowed the researchers to identify the right target and progress from hypothesis to human proof-of-concept.

In 2014, two research publications highlighted MutT Homolog 1 (MTH1) as a potential new target for oncology based on RNAi knockdown results 11, 12. Following this, researchers at Astra Zeneca sought to repeat and extend this target validation work 13. Using CRISPR-Cas9 they introduced indels into exon 2 of the MTH1 gene to create MTH1 knockout cell lines, using western blots were used to show full protein knockdown. The resulting KO cell lines showed equivalent growth to the WT 13. Further treatment of the MTH1 KO cells with specific inhibitors showed no difference in the cell viability of the KO and WT cell lines 13. Using this CRISPR approach, the target was devalidated and resource saved pursuing false targets.

The precision offered by CRISPR-Cas9 has brought increased accuracy to speed drug discovery and development, and as this technology is increasingly incorporated into workflows in a variety of assay designs we can hope to see improved results through the preclinical drug pipeline.