We discuss how poor antibody validation has impacted research and development across the life sciences and how the use of knock-outs can help you get this right first time in your work.

Over the past decade, the number of studies highlighting poor antibody validation as an underlying issue of research reproducibility in life science has increased 1-4. Our antibodies are extensively validated across many applications, but antibodies must also be validated by the end-user in their own experimental set-up to ensure functionality.

As research is frequently built on previous studies, unreliable data from one study may be used to support further research and development. This house of cards, based on non-specific and poorly validated antibodies, has tumbled in many cases, often at the expense of years of research. Over 36% of unproductive experiments in preclinical R&D can be attributed to ineffective reagents, including antibodies. This reagent-related irreproducibility is costing the life science industry over $17 billion annually 2

There are numerous examples of studies failing due to poorly validated antibodies. In some cases, the failure of the antibody becomes apparent during the project and researchers must go back to the drawing board. For others, this has meant retracting published studies from journals, with no way to assess the wider downstream impact on research that has been based on such published studies.

In 2006, a paper published in EMBO Journal, identified the post-translational regulatory mechanisms of the transcriptional repressor methyl-CpG-binding domain protein 1 (MBD1) 5. Since its publication, this paper was cited by 30 other articles. However, in 2019, the paper was retracted due to the demonstrated off-target specificity of the antibody used in this study 6. The article retraction shows that rather than binding to the supposed target of MBD1, the antibody used in the study actually bound specifically to a different protein, cleavage, and polyadenylation specificity factor 6 (CPSF6) 3.

A more recent study from Novartis, published in Nature Cell Biology, was cited in 31 other studies and then retracted three years after publication, due to the lack of specificity of a number of antibodies used in the study, which called into question the paper’s main conclusions.7

These are not isolated cases. In a field-wide call for increased antibody standards, Bradbury and Plückthun stated that poorly characterized antibodies were largely responsible for the failure to replicate more than 11% of landmark preclinical studies 3,4. A study from the University of Toronto, Canada, assessing 1124 affinity reagents targeting chromatin-related proteins, revealed that just 31% were specific for their target antigen 8. Indeed, a recent analysis suggests that the high rate of attrition in drug development is due to poorly validated research reagents, including antibodies, in the preclinical phase 2.

The problem has become so widespread that journals are now publishing guidelines for researchers requiring antibody validation data before publishing antibody-based studies 9. However, while antibody identification by researchers has improved in response to journal specifications, researchers are still failing to perform adequate experimental validation 10,11.

How do knock-outs improve antibody validation?

The industry gold standard for ensuring antibody specificity and overcoming these issues is knock-out (KO) validation. Using a KO cell line that does not express your protein of interest offers a true negative control. While many suppliers validate their antibodies extensively for use in different applications, each experimental set-up is different and requires end-user validation to confirm the antibody’s performance 1, 12-14.

At Abcam, we use large-scale KO validation to confirm the specificity of our antibodies. From this, we have learned that validating antibodies in multiple applications – from western blot to immunocytochemistry – is essential to ensure the specificity of an antibody for each intended method. Antibody specificity is highly dependent upon the assay the antibody is used in; assay conditions may affect antibody binding, and the presentation of the antigen, whether in folded or denatured form, can determine whether an antibody will detect the protein target 1, 12-14.

A study from a team at the Montreal Neurological Institute and Hospital, Canada, showed how the use of CRISPR KO cells could help to select antibodies that are target specific and function in relevant applications. The researchers generated a CRISPR-Cas9 KO cell line for their target, the major amyotrophic lateral sclerosis (ALS) disease gene C9ORF72. They then used this to test a panel of 16 commercially available antibodies to C9ORF72 via several techniques. Out of the 16 different antibodies, only one was specific for the target in immunofluorescence, while a further two showed target specificity via other techniques 15.

Another key lesson reflected in the research is that a well-cited antibody does not necessarily translate to a well-validated antibody. The study from Montreal on C9ORF72 showed that the antibodies identified as target specific had not been cited in the research. In contrast, those that were non-specific were widely cited for the target. In-house we have seen similar results; for example, a popular CD73 antibody showed off-target interactions, labeling a protein at 55 kDa rather than the 69-73 kDa expected for CD73, while the KO-validated antibody that demonstrated target specificity was not as highly cited. This resulted in the removal of the non-specific antibody from our catalog, to ensure the accuracy of our reagents from researchers. 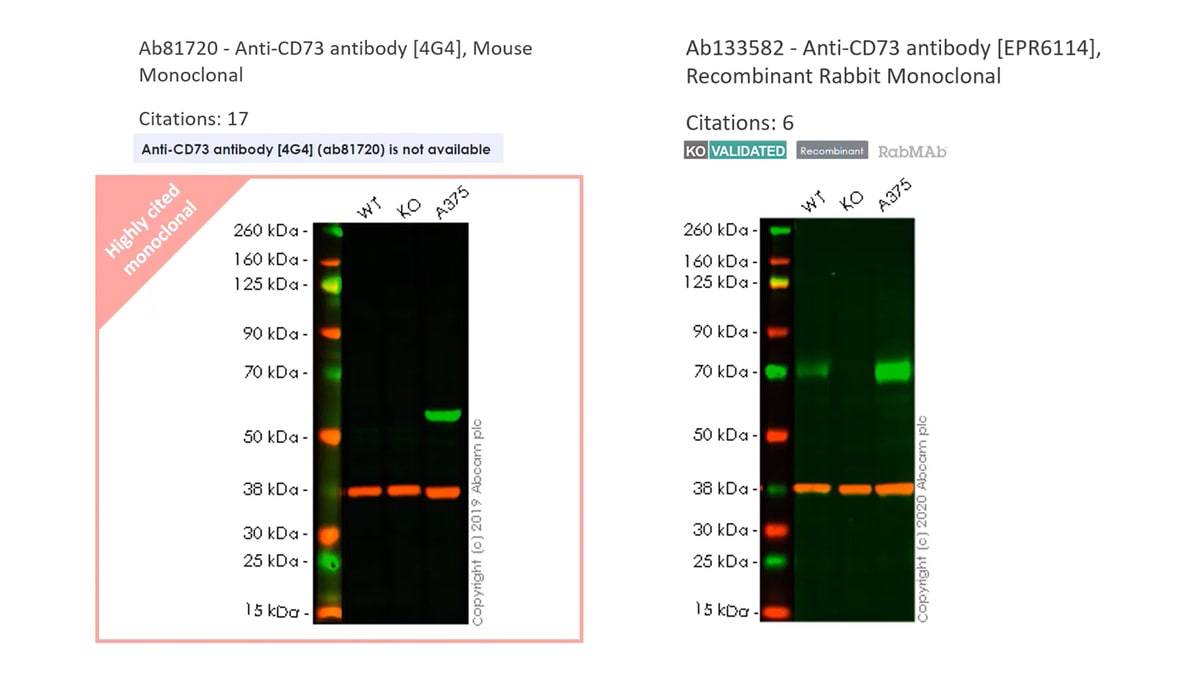 The call for the use of KO cell lines to validate antibody specificity and help overcome the problems of research retraction, failure of preclinical trials to validate targets and the time and cost of wasted research is increasing 1, 8-10. As journals request thorough end-user validation of antibodies for publication 8, and both academic and industrial researchers alike hope to improve validation standards to increase the translation of their research, KO cell lines and KO lysates are being recognized as the right solution to the problem of antibody specificity.

In addition to in-house knock-out validation of our antibodies, we have developed a range of KO cell lines and lysates to support antibody validation in your own experimental system. All our KO cell lines are Sanger sequenced to confirm ablation, with many further validated at the proteomic level via western blot. For rapid analysis, we offer KO cell lysates, so that you can get straight to validating without the need for cell culture, or for more intensive methods you can purchase a KO cell line. We can supply a WT sample for all our KO cell lines and lysates to make sure you have everything you need to fully validate your antibody and ensure the reliability of your data.