With the capacity to both promote and suppress the inflammatory response, it is important to understand the complex network of secreted cytokines.

The initial function of acute inflammation is to recruit leukocytes from circulation. These are primarily neutrophils, followed by monocytes that differentiate into macrophages or dendritic cells. The inflammatory response proceeds with the degranulation and activation of local mast cells and macrophages, and the release of a variety of pro-inflammatory mediators, including bioactive amines (histamine and serotonin), cytokines (IL-1 and TNF-α) and chemokines.

The resulting vasodilation and increased vascular permeability allow the extravasation of leukocytes and plasma to the site of injury or infection. Neutrophils then move along a chemotactic gradient created by cytokines and components of the complement pathways (C5a in particular). Recruited neutrophils will attempt to destroy the inflammatory agent to eventually elicit resolution and healing.

Measuring the effects of various cytokines is essential for understanding the communication between cells involved in inflammation. It is common for a single cytokine to act on several types of cell, often leading to a cascade of increasingly complex outcomes.

Myeloid cells such as dendritic cells, monocytes and macrophages secrete pro-inflammatory cytokines that activate naive CD4+ T cells5. These can then differentiate into different T helper (Th) cell subsets based on the specific cytokines released4–8.

Differentiated T cells continue to respond to and produce their own cytokines leading to a complex network of interactions and a variety of physiological responses. CD4+ T cells secreting only IL-17 for example, are elevated in inflamed portions of the colon of patients with ulcerative colitis, which is associated with a decline in Th22 cells producing only IL-229. 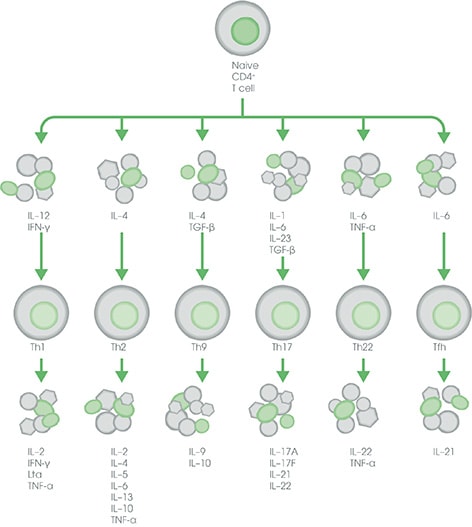 Figure 1. Cytokines responsible for the differentiation of specific T helper (Th) cells during inflammation and the cytokines these cells subsequently secrete.

However, novel drugs designed to neutralize other cytokines, such as IFN-γ (fontolizumab) and IL-17A (secukinumab), have been unsuccessful or even detrimental to patients with Crohn’s disease11,12.

It’s clear that cytokines do not operate in isolation but rather in a network of activation and suppression. Assessing inflammatory responses via the measurement of individual cytokines can often fail to reflect this complexity.

To overcome this, utilizing a multiplex assay or array is highly effective as it captures the diversity of secreted cytokines. This allows for the analysis of hundreds of targets simultaneously. We offer cytokine proteins for use as differentiators and also antibody arrays and ELISA kits, including SimpleStep ELISA, for the measurement of secreted cytokines.