​​​​​Learn about NF-κB family structure and signaling via canonical and non-canonical pathways.

In mammals, the NF-κB family is composed of five related transcription factors: p50, p52, RelA (p65), c-Rel, and RelB1,2. These transcription factors share homology through a 300 amino acid N-terminal DNA binding/dimerization domain, called the Rel homology domain (RHD). The RHD is a platform where family members can form homodimers and heterodimers, enabling them to bind promoters and enhancer regions of genes to modulate their expression.

NF-κB proteins are inhibited by IκB proteins present in the cytoplasm. There are currently seven identified IκB family members: IκBα, IκBβ, Bcl-3, IκBε, IκBγ, and the precursor proteins p100 and p105, which are characterized by the presence of ankyrin repeats.

Two signaling pathways lead to the activation of NF-κB: the classical (canonical) pathway and the alternative (non-canonical) pathway3–6. The common regulatory step in both of these cascades is activation of an IκB kinase (IKK) complex consisting of catalytic kinase subunits (IKKα and/or IKKβ) and the regulatory non-enzymatic scaffold protein NEMO (NF-κB essential modulator also known as IKKγ).

NF-κB dimers are activated by IKK-mediated phosphorylation of IκB, which triggers proteasomal IκB degradation. This enables the active NF-κB transcription factor subunits to translocate to the nucleus and induce target gene expression. NF-κB activation leads to expression of the IκBα gene, which functions as a negative feedback loop to sequester NF-κB subunits, terminating signaling unless a persistent activation signal is present. 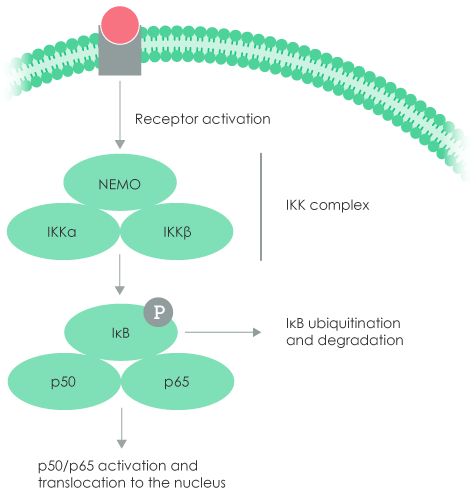 Figure 1. The canonical pathway. Ligand binding to a receptor leads to the recruitment and activation of an IKK complex comprising IKK alpha and/or IKK beta catalytic subunits and two molecules of NEMO. The IKK complex then phosphorylates IκB leading to degradation by the proteasome. NF-κB then translocates to the nucleus to activate target genes.

​In the canonical signaling pathway, binding of a ligand to a cell surface receptor such as a member of the Toll-like receptor superfamily leads to the recruitment of adaptors (such as TRAF) to the cytoplasmic domain of the receptor (Figure 1). These adaptors in turn recruit the IKK complex, which leads to phosphorylation and degradation of the IκB inhibitor. The canonical pathway activates NF-κB dimers comprising RelA, c-Rel, RelB, and p50.

The non-canonical pathway is responsible for the activation of p100/RelB complexes and occurs during the development of lymphoid organs responsible for the generation of B and T lymphocytes (Figure 2). Only a small number of stimuli are known to activate NF-κB via this pathway and these factors include lymphotoxin B and B cell-activating factor (BAFF). 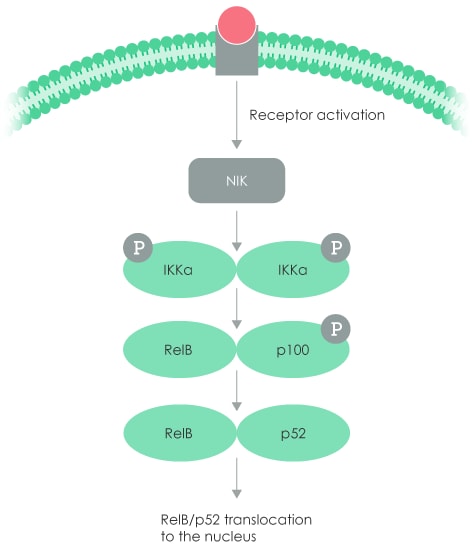 Figure 2: The non-canonical pathway. Non-canonical NF-kB activation involves phosphorylation and processing of the p52 precursor, p100 into the mature protein, and subsequent nuclear translocation of the RelB:p52 heterodimer to the nucleus to activate target genes.

This pathway involves an IKK complex that contains two IKKα subunits, but not NEMO. In the non-canonical pathway, ligand-induced activation triggers NF-κB inducing kinase (NIK) to phosphorylate and activate the IKKα complex. In turn, the IKKα complex phosphorylates p100 leading to the processing and liberation of the p52/RelB active heterodimer.

For a more detailed look at NF- κB signaling, view our interactive pathway.